Washington was on the receiving end on Tuesday of an earthquake that registered 5.8 on the Richter scale. A 5.8’er might not impress folks in California (and note to those folks…you getting two inches of snow doesn’t impress us in these parts, either), but it made for an interesting afternoon and evening. We will spare you the gory details of our five-hour commute from downtown D.C. to Loudoun County (about 30 miles as the pigeon flies). It did get us to thinking about that Richter scale, though. A 5.8’er is roughly equivalent to 7.6 kilotons of TNT, roughly half the energy yield of the Hiroshima atomic bomb. And an earthquake of 5.0-5.9 occurs about 800 times per year, about 2.2 such events worldwide per day (all that according to Wikipedia).

But – and you were wondering if we’d be getting around to how this relates to hockey – what if there was a Richter scale for our Washington Capitals? We might have something like the following… 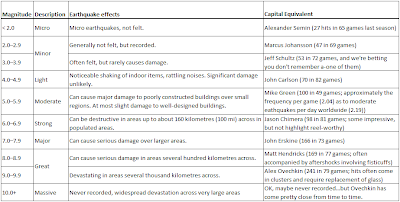 (click for larger image)
Too bad Boyd Gordon wasn't still here...we could make some snarky comment about his shot being in the "micro" category.
Posted by The Peerless at 9:11 PM 4 comments: