The Peerless Prognosticator is ON THE AIR!!! -- Game 31: Lightning at Capitals, December 18th

For the third time in ten games the Washington Capitals will do battle with the Tampa Bay Lightning in a contest that will end the regular season series between the two teams.  The Caps won the first two games of the series and will try to complete the season sweep at Verizon Center on Friday night.

Not much has changed since we prognostified the contest of last Saturday, so let’s go with that.    One thing to note is that except for the Caps being able to subdue the Bolts, the teams are still heading along similar paths.  Both teams won both games they played since they met last weekend, the Caps beating Pittsburgh and Ottawa (allowing a total of two goals in the process), the Lightning beating Columbus on Toronto on their respective rinks. 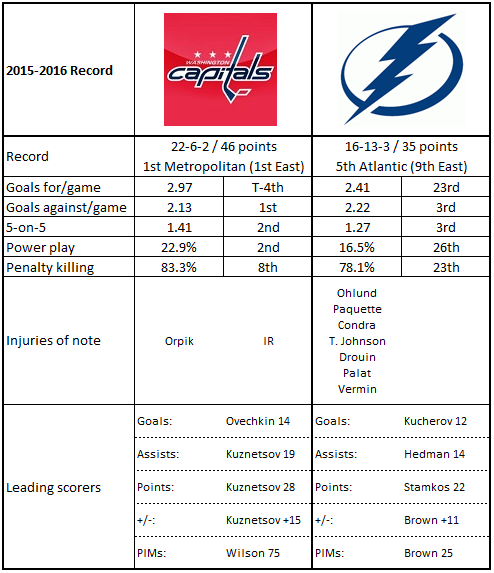 1.  Tampa Bay is a resourceful road team.  Of the 16 teams in the Eastern Conference, only Boston (22) and Washington (21) have more standings points earned in their opponents’ rinks than the Lightning (20) through Wednesday’s games.

2.  Special teams have been an issue for the Lightning away from Amelie Arena.  In 18 road games, their power play has connected just seven times in 56 opportunities, good for 27th the league in road power play efficiency.  Their penalty kill is hardly better at 78.6 percent on 44 kills in 56 shorthanded situations (22nd in the league).  Tampa Bay’s special teams index on the road (power play plus penalty kill efficiency) is 91.1, 25th in the league.

3.  Steven Stamkos is in the midst of a ten-game goal scoring drought, his longest since an 11-game drought in December 2008, his rookie season.  He is within three games of his career worst streak of games without a goal – 13, set earlier in that 2008-2009 rookie season.  Stamkos has not scored a goal on the road since November 5th at Buffalo.  He has gone eight road contests without a goal on 16 shots.  He has only four shots on goal over his last five road games, no more than one shot on goal in any of them.

4.  Tampa Bay’ strength on the road so far this season is keeping opponents off the scoreboard.  Their 2.28 goals against per game ranks fourth-best in the league.  It is what allows the Lightning to have the ninth best goal differential on the road this season (plus-0.17).

1.  Looking at the Caps at home, only the New York Rangers have more standings points earned at home this season (27) than Washington (25).  Only the Dallas Stars have earned more points per home game (1.60) than the Caps (1.56).

2.  Washington has had very efficient special teams at home, but there is an odd bias to them.   The power play is 13-for-50 (26.0 percent), ranked fourth in efficiency.   However, those 50 opportunities ranks 19th in the league.  The opportunity element is even more pronounced on the other side of special teams.  The Caps are 33-for-40 in penalty killing on home ice (82.5 percent), ranked 14th in the league.  It is not an especially impressive number or ranking, but the 40 shorthanded situations faced are the sixth-fewest faced in the league.

3.  Alex Ovechkin likes home cooking.  Ten of his 14 goals have been scored in the friendly confines of Verizon Center.  He is tied for sixth in home goals scored this season.  What is more, he comes to this game on a hot streak on home ice.  He has seven goals in his last 10 games on F Street. And, he has been active, recording 54 shots on goal in those ten games, finishing with six or more shots in four of the ten games.

4.  The Caps have been a good, but not overwhelming offensive team on home ice so far.  Their 2.94 goals per game ranks tied for tenth in scoring offense on home ice.  It is on the defensive side where they have been impressive.  Their 2.13 goals per game at Verizon Center is tied for fifth in the league (odd fact, the Caps are tied in both home scoring offense and defense with Nashville, both scoring 47 goals in 16 home games and allowing 34 goals).  The Caps’ plus-0.81 goal differential on home ice is tied for fifth best in the league.

Jonathan Marchessault has the longest name on the club and is its smallest player at 174 pounds.  He also has goals in his last two games, the only Lightning player who can make that claim.  An undrafted free agent out of Cap-Rouge, Quebec (shouldn’t he be a Capital with that home town?), he was signed by the Columbus Blue Jackets in July 2012, he played in only two games with the Jackets before he was signed last summer by the Lightning to a one-year deal.  He has shown a knack for scoring goals, having lit the lamp five times in 19 career games to date, four of those goals coming in 15 games this season.  He is without a point in two career games against the Caps.

Jason Chimera has become a fixture in Washington since arriving in trade from the Columbus Blue Jackets in December 2009.  And now, he is poised to join an interesting, if obscure club.  His next goal will be his 70th with the team, and it will make him the sixth player since the 2005-2006 lockout to post at least 70 goals and at least 100 assists with the Caps.  The others are a who’s who of the modern era of Capitals – Alex Ovechkin, Nicklas Backstrom, Mike Green, Brooks Laich, and Alexander Semin.  He has been in a bit of a slump lately, going without a goal in his last seven games.  The last goal he scored on home ice was against the Lightning in a 4-2 win on November 27th.  Chimera is 7-8-15, plus-3, in 31 career games against the Lightning.

Posted by The Peerless at 7:46 PM No comments: