The Peerless Prognosticator is ON THE AIR!!! -- Game 7: Capitals at Flames, October 25nd

The Washington Capitals take the ice in the middle game of their three game western trip, facing the Calgary Flames at the Scotiabank Saddledome on Saturday night.

Both teams are off to good starts.  The Caps went five games without a loss in regulation time before the Edmonton Oilers defeated them, 3-2, on Wednesday.  Even with the loss, the Caps went into Friday night’s games  two points out of the Metropolitan Division lead with a game in hand behind the New York Islanders.

Meanwhile, the Flames hit a couple of potholes to start their 2014-2015 journey, losing two of their first three games.  Since then, they are 4-1-1 and are just one point behind the Anaheim Ducks for the Pacific Division lead.

Calgary has done it with defense – at both ends of the rink.  Their scoring defense (2.11 goals/game) ranks 11th in the league, but it is more than three-quarters of a goal per game better than how the Flames finished last season (2.90 goals/game) and almost half of what it was after nine games last season (4.00 goals/game).

Part of the improvement is a change in goal.  Jonas Hiller signed a two-year/$9 million contract with the Flames last July.  The club hoped that he would provide the stability that was missing between the pipes last season when Calgary employed four different goaltenders, three of them with a save percentage under .500.  Hiller has appeared in five games so far and has played better than his record indicates.  Although he is 3-2-0, his goals against average of 1.78 ranks eighth among goalies appearing in at least three games, and his .948 save percentage ranks fifth in that group.  In five career appearances against the Caps, Hiller is 2-1-1, 3.33, .890.  That save percentage is second worst among the team he has faced (.888 in five appearances against Buffalo).

At the other end, four of the top eight point-getters on the club are defensemen: T.J. Brodie (3-4-7), Mark Giordano (1-6-7), Dennis Wideman (4-1-5), and Kris Russell (0-5-5).  Those four represent four of the top 20 scorers in the league among defensemen (going into Friday’s games).  Brodie just signed this past Monday a five-year contract extension that will pay him a total of $23.25 million, and he’s already a bust.  Not really, but having gone without a point in his two games since signing the new deal, he interrupted a six-game points streak.  He is still, though, a minutes eater.  When he skated 19:44 in Calgary’s last outing against Carolina, it was the first time this season he skated fewer than 21 minutes.  He is 15th in the league in average ice time among defensemen.

Among the forwards, Joe Colborne has an odd scoring line.  All eight of his points so far have come via assists.  He and Columbus’ Scott Hartnell (also 0-8-8) are the only forwards among the 29 in the league with at least eight points and no goals.  Through nine games, Colborne is almost a third of the way to the point total he recorded in 80 games last season (28).

Here are the numbers and rankings (through Thursday’s games) for the teams as they head into this game: 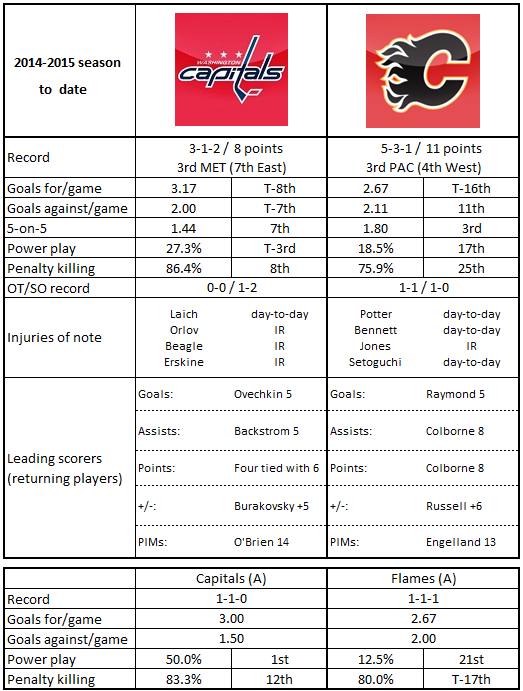 1.  Calgary games have been nail-biters or blow-outs with not much in-between so far.  The Flames are 2-1-1 in one-goal games, three of them settled in extra time), 3-1 in games settled by three or more goals.

3.  The Flames have quite a finishing kick.  No team in the league has more third period goals (10), and they have allowed only three goals in the last 20 minutes of games.  That plus-7 goal differential is tied with Chicago for tops in the league.

4.  One thing the Flames do very well, or at least very frequently, is block shots.  They are far and away the league leader in that statistic with 159 (Buffalo has 141).  Then again, that is evidence of the other team spending a lot of time in the Calgary zone taking shots.

1.  The Caps have done it with balance so far.  Nine different players are averaging at least half a point per game, and four players are tied for the team lead with six points apiece (Alex Ovechkin, Mike Green, Andre Burakovsky, and Nicklas Backstrom).

2.  Mike Green is “back” in one respect.  Only Dennis Wideman, with four goals, has more than Green among the league’s defensemen.  Green is tied for sixth overall in scoring among blueliners.

3.  No team has dressed more rookie skaters so far this season than the Caps.  Burakovsky, Evgeny Kuznetsov, Liam O’Brien, and Micahel Latta have appeared in games so far, all but Latta appearing in all six contests.

4.  The Caps have has a talent for putting the clamps to opponents late.  Only Chicago (5) and Minnesota (3) have allowed fewer goals over the last 40 minutes of games than Washington (6).

So far, head coach Bob Hartley has faithfully rotated Jonas Hiller and Karri Ramo in goal.  Hiller got the call against Carolina in the Flames’ 5-0 shutout win on Thursday, which suggests that Ramo will get the call against the Caps on Saturday.  Ramo is 2-1-1 in four appearances with a respectable 2.20 goals against average and a .917 save percentage.  There has been some slippage in his play of late though.  After stopping 38 of 40 shots in a 5-2 win at Edmonton in his first appearance on October 9th, he is 1-1-1, 2.25, .899.  He is 1-3-2, 3.11, .906 in seven career appearances against Washington.

It is not likely to last long, but Alex Ovechkin is “only” tied for seventh in the league in shots on goal.  He is on a pace for 383 shots, so he has not become a shrinking violet in that regard, but he also has only four shots on goal in his last two games after recording 24 in his first four games.  It might not be a coincidence that Ovechkin does not have a goal in either of those last two games.  He has not gone three straight games with two or fewer shots on goal since he went four consecutive games January 15-February 4, 2012.  This could be the team against which he can get back into the scoring column.  In eight career games against the Flames he is 8-7-15.

The Caps should have beaten Edmonton and did in just about every way but on the scoreboard.  They should win this game – on the scoreboard.  The team they are facing has had a decent start, but the Flames have achieved that start in contradiction to their possession numbers, which are rather poor.  Washington has taken to whatever remedies coach Barry Trotz is applying, if their own possession numbers are an indicator.  If Hiller gets the start for the Flames in this game, he can keep it close single-handedly.  If Ramo gets the call, this game should end comfortably on the good side for the good guys.  We think it could come down to a couple of sons of Mother Russia look quite at home on the Canadian prairie. 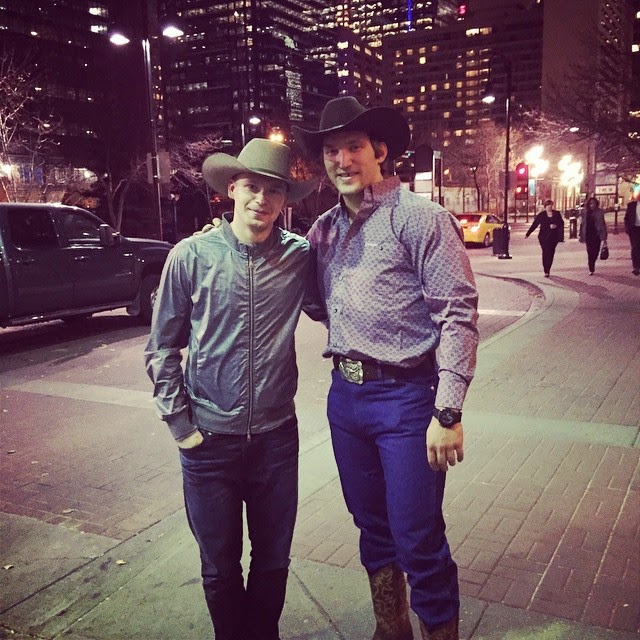 You could almost imagine them singing of the old pioneer west…

Posted by The Peerless at 7:38 PM No comments: