The Peerless Prognosticator is ON THE AIR!!! -- Game 45: Blues at Capitals, January 14th

The Washington Capitals opened the 2019 portion of their regular season schedule in St. Louis, where they dropped a 5-2 decision to the Blues.  They get a chance for a some retribution on Monday night at Capital One Arena when the Blues visit.  The Caps, whose last loss in regulation was their 5-2 loss to the Blues on January 3rd, will be looking to extend their points streak to six games, while the Blues will be trying to extend their current winning streak to three games.

St. Louis has been inching closer to playoff contention as of late, opening the new week five points behind the Minnesota Wild for the second wild card spot in the Western Conference.   It will be a hard path for the Blues, who have to jump past five teams to get into the playoff mix.  But they have gotten off to a good start in the new year with a 4-2-0 record since January 1st.

The Blues have done it largely by buttoning up on the defensive side of the puck allowing only 11 goals in six games this month.  That has been largely the product of the pleasant surprise that is Jordan Binnington in goal.  Binnington was not an especially heralded goaltender when taken by the Blues in the third round (88th overall) in the 2011 entry draft.  In fact, even with six games on his NHL resume to date, he has fewer games played among goalies in that class than those named “Gibson.”  Not only John Gibson, who was taken 39th overall by the Anaheim Ducks in that draft, but Christopher Gibson, who was taken 49th in that draft by the Los Angeles Kings and who has 13 NHL games on his record.

Binnington got one appearance with the Blues in 2015-2016, but he did not get his first NHL start until this past January 7th. It was quite a statement, Binnington stopping all 25 shots he faced in a 3-0 win over the Philadelphia Flyers on January 7th.  He has since won twice more, stopping 49 of 51 shots (.961 save percentage) in the two wins.

Flipping the calendar to 2019 has been kind to Vladimir Tarasenko.  A goal scorer who was not scoring goals (he had only 11 goals in 37 games in the 2018 portion of the schedule), Tarasenko leads the club with three goals in six games since the start of the new year.  He had his first multi-goal game in more than two months (October 27th) when he potted a pair in a 3-1 win over the Dallas Stars on Saturday night.  He is 3-2-5 over his last five games.  In nine career games against the Caps, Tarasenko is 7-1-8, plus-6.

David Perron is tied for the club in points in the new year (2-5-7).  Originally a first-round pick of the Blues (26th overall in 2007), Perron is in his second tour with the club after stops with four other clubs in a 12-year career.  Without a 20-goal season since 2013-2014 (28 goals with the Edmonton Oilers), Perron has 15 goals in 42 games, putting him on a pace to top that mark for the third time in his career (he also had 21 goals in 57 games in 2011-2012 with the Blues).  The odd part of Perron’s goal scoring this season is how little bearing it seems to have on wins and losses.  In 11 games in which he has goals this season, the Blues are 5-4-2.  Perron has yet to record a goal in 17 career games against Washington, but he does have nine assists.

Ryan O’Reilly also has seven points in the new year (1-6-7) and is tied for the team lead in plus-minus (plus-6).  He has been hot of late, going 3-7-10, plus-9, in his last nine games.  It is part of a larger season that has him on a pace to finish the season with 80 points, surpassing his career high in points (64 in 2013-2014 with Colorado). O’Reilly is in a rather select club, a club of one in fact.  He is the only active player to have appeared in at least 650 career games and log 90 or fewer penalty minutes (90 minutes in 694 games), and he is only the third player in NHL history to have done so.  He has only six minutes in penalties in 43 games this season.  O’Reilly does not have a penalty minute in 17 career games against the Caps, against whom he is also looking for his first goal.  In 17 career games against Washington, he is 0-7-7, minus-1). 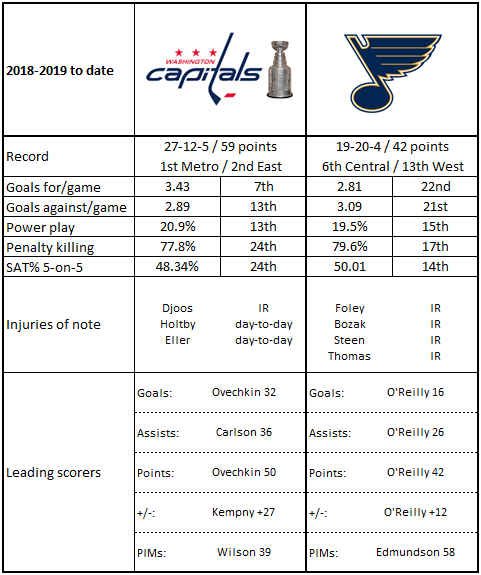 1.  Scoring on the road remains an issue for the Blues.  Only the Los Angeles Kings have scored fewer goals (39) on the road than St. Louis (40), although the Blues are the only team yet to play as many as 20 games on the road this season (17).

2.  On the other hand, the 43 goals allowed by the Blues on the road are, by far, the fewest in the league (Calgary has allowed 56 goals in 24 road games).

4.  The Blues have the fifth-worst shot attempts-for percentage at 5-on-5 on the road this season when tied with opponents (43.78 percent).

3.  Matt Niskanen has the only overtime goal scored by the Caps at home this season (October 17th in a 4-3 win over the New York Rangers).

4.  Only two teams have fewer power play chances on home ice than the Caps (55).  Los Angeles and St. Louis each have had 49 chances.

Durability has been an issue for St. Louis defensemen this season.  Colton Parayko is the only one of ten defensemen to dress this season for the Blues who has appeared in every one of the Blues’ 43 games.  Durability has been a hallmark of his four seasons with the Blues to date, having missed only four games in that span.  He has been a reliably productive offensive contributor from the blue line as well, posting more than 30 points in each of his three seasons preceding this one.  He is not, however, on a pace to match that this season, his 12 points in 43 games on a pace for 23 by season’s end.  What he is on a pace for is a career best in goals.  The eight he has so far is one short of the nine he recorded in 79 games in his rookie season.  His scoring matters.  St. Louis is 5-0-2 in the seven games in which he has goals this season, 8-0-3 in the 11 games in which he has points.  Parayko is 2-2-4, plus-3, in the seven games in which he faced the Caps in his career.

When Brooks Orpik takes the ice on Monday night, it will be the 1,000th time he appeared in an NHL regular season game, making him the 37th active player to appear in at least 1,000 career regular season games.  And, unless he records a hat trick, he will become the first player in NHL history to appear in at least 1,000 games and record fewer than 20 career goals (he has 17).  Goal scoring has not been a feature of his five seasons with the Caps, three of the previous four ending without one.  He does have one this season, but his importance is perhaps more as a steadying influence on the ice.  He has been limited by injury to 17 games this season, but in the 11 games in which he skated at least 15 minutes, the Caps are 7-2-2.  While that might be a product of the Caps spreading out ice time in games in which they have leads, it is a signal that the Caps are doing well when Orpik gets more ice time. He is 0-3-3, plus-1, in 19 career games against St. Louis.

The Caps face a difficult start to the week with back-to-back games against St. Louis on Monday and the Nashville Predators on Tuesday.  Add to that the fact that the Caps do not really have much of a rivalry against Central Division teams and that we are getting into what passes for the “dog days” of the NHL schedule, and this is a tough two-game stretch.  There is some motivation for the Caps in that they lost recent games to these two teams by a combined 11-5 margin, but it is the sort of spot in the schedule that poses challenges for any NHL team.  It is something to plow through… get it?

Posted by The Peerless at 12:03 AM No comments: