The Peerless Prognosticator is ON THE AIR!!! -- Game 10: Capitals at Lightning, November 1st

Well, the trick-or-treaters are gone, gorging themselves on sweet treats, and the calendar has flipped to a new month.  For hockey fans the sweet treat on Saturday night will be the Washington Capitals facing an old Southeast Division foe for the first time this season when they host the Tampa Bay Lightning.

Stamkos is back, and so are the Lightning, at least in the early going.  Tampa Bay has been methodical in putting together a 7-3-1 record going into this game.  They have yet to string together more than two consecutive wins (although they would accomplish that feat with a win against the Caps), but they also have yet to lose consecutive games.

As for Stamkos, he was on a pace to score 68 goals last season when he broke his leg against the Boston Bruins in Game 17.  He still finished with 25 goals in 37 games (a 55-goal pace).  He has picked up this season almost where he left off in Game 17 last season, recording eight goals in his first 11 games (a 60-goal pace), including a hat trick in the Lightning’s last game, a 4-2 win over Philadelphia.

Stamkos is the only legitimate challenger to Alex Ovechkin as the league’s most dangerous goal scorer these days (and many think him as having surpassed Ovechkin).  Stamkos and Ovechkin do it in very different ways.  Ovechkin’s effectiveness is largely a product of relentlessness as the most prolific shooter of this generation, averaging 5.05 shots per game over his career (414 per 82 games).  On the other hand, Stamkos is ruthlessly efficient.  Now in his seventh season, he his worst season shooting percentage (12.7 percent in his rookie 2008-2009 season) is better than Ovechkin’s career average (12.3 percent).  Since that rookie season, Stamkos’ shooting percentage has not been lower than 16.5 percent in any season.  Against the Caps, Stamkos is 13-11-24 in 29 games, but he is without a goal against Washington in his last five games.

On defense the Lightning are having to fill the considerable void left after Victor Hedman broke a finger on his right hand in a 4-2 win over Vancouver two weeks ago.  The Lightning do not lack for experience in attacking that task.  In Eric Brewer, Jason Garrison, Matt Carle, and Anton Stralman, Tampa Bay has 2,320 games of regular season experience on which to draw.  The odd part, or perhaps not, given the times, is that none of the four are home grown.  Stralman is the standout here.  Signed away from the New York Rangers as a free agent last July, he leads the defensemen in average ice time (22:28), leads them in assists (8) and points (9), and leads the league’s defensemen in plus-minus (plus-11).  Against the Caps, Stralman has appeared in 19 games and has a 0-3-3 scoring line. 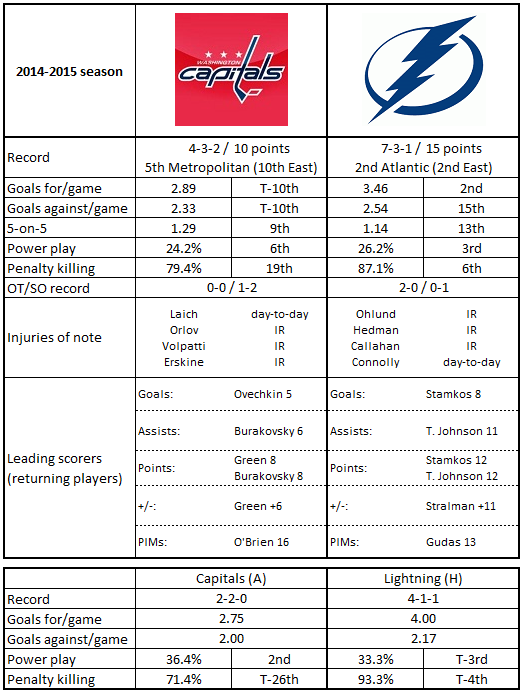 1.  Tampa Bay has already gone through 24 skaters through just 11 games.  Only 11 of them have appeared in all 11 games to date, but all of them have at least one goal except Brenden Morrow.  Only ten of the 24 skaters were drafted by the club.

2.  No team has scored more third period goals than the Lightning (14).  The Lighting have positive goal differentials in all three periods of games (plus-3, plus-2, plus-3), and for good measure, plus-2 in overtime.

4.  The Lightning are another team, similar to the Red Wings, who play within the rules…sorta.  Tampa Bay has the sixth-lowest average penalty minutes per game (9.5), but they are a middle-of-the-pack team in minor penalties taken (41, 15th fewest) and majors (4, tied for 18th fewest).  They have yet to take a misconduct penalty of any kind or a match penalty.  They have only one bench minor otherwise.

5.  The Caps will get no break from the Lightning as far as possession is concerned.  Tampa Bay ranks right behind the Capitals in Fenwick-for percentage at 5-on-5 (seventh; 54.04 percent) and in Corsi-for percentage (sixth; 53.51; numbers from war-on-ice.com).

2.  The Caps are one of five teams in the league not to have been charged with a misconduct penalty (ten-minute or game), a match penalty, or a bench minor penalty.

4.  Teams that led games after the first period fewer times than the Caps (3 times):  Florida, Ottawa, Buffalo, Nashville, Calgary, New York Rangers, Edmonton, Detroit, Carolina, Toronto, Montreal (who has not led at the first intermission yet this season), Arizona.  For the most part, this is a pretty seedy neighborhood.

5.  Last year the Caps stunk on toast at even strength.  All those hideous individual plus-minus numbers.  This year the profile is much better.  Only seven of 22 skaters are in minus territory.  The good news about that is that none of the seven are worse than minus-3.  The bad news is who is in that territory: Nicklas Backstrom (minus-1), Alex Ovechkin (minus-1), Brooks Orpik (minus-2), and John Carlson (minus-3) among them.

Tampa Bay is an offense-weighted team led by an elite goal-scorer.  Defense and goaltending merely needs to be respectable to be successful (in the regular season; the playoffs are another matter).  The Lightning have received such goaltending from Ben Bishop so far.  His numbers have been unremarkable, a goals against average of 2.39 (21st among qualifying goaltending leaders) and a save percentage of .911 (26th).  On the other hand, he has been remarkably consistent.  In nine appearances he wins consistently (6-1-1), and he allows goals consistently (two goals allowed four times, three goals allowed four times, although one of the three goal efforts was in just 42 minutes of a 7-2 loss to Minnesota).  He has benefited, like Capitals goaltenders, from facing shots with low frequency (26.8 shots per 60 minutes).  Where he has been weak is in stopping shots at even strength.  He is 35th among qualifying goaltenders (four or more games) in even strength save percentage (.903).  He is 0-2-1, 4.48, .872 in four career appearances against the Caps.

“Solid” would be the word to describe the play of Mike Green on the Capitals’ blue line.  Green is tied for eighth among defensemen in points (3-5-8), tied for ninth in plus-minus (plus-6), 12th in shooting percentage (15.8 percent), and he has done averaging more than 20 minutes a game in ice time largely paired with a youngster with fewer than 40 games of NHL experience (Nate Schmidt, with whom Green has spent 76.0 percent of his 5-on-5 ice time).  Green has displayed a consistency of his own in the early going.  He is 1-3-4, plus-3 in four games at home; 2-2-4, plus-3 in four games on the road.  The odd part of it is that while he was once known as the prime quarterback of the Capitals power play (John Carlson has had that responsibility through the first nine games), Green is third in the league among defensemen in even-strength scoring (2-5-7).  In 42 career games against the Lightning, Green is 10-18-28, minus-4.

This is a game that could turn on which team can impose its strengths on the other’s weaknesses.  The Caps are the better 5-on-5 team, the Lightning have better special teams.  That means that the game might be decided by how many special teams situations the Caps face.  In three games in which they faced five or more shorthanded situations, they are 1-1-1, and their win came in a Gimmick.  Facing four or fewer, the Caps are 3-2-1, and all of the wins were of the multi-goal variety.  For the zebra haters out there, this might be a game to watch. We are not of the conspiracy theory crowd, though.  We just think the Caps will win the old fashioned way, by being better.

Posted by The Peerless at 8:08 AM No comments: