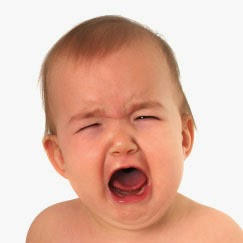 Well, that didn’t go so well, did it?

The Washington Capitals opened their 2015 post season by laying an egg, dropping a 4-1 decision to the New York Islanders at Verizon Center on Wednesday night, ceding home ice advantage to the Isles and putting themselves in a hole to start their first round series.

The Islanders scored early, scored late, and stifled the Caps in between.  Brock Nelson took care of the early scoring off a neutral zone turnover by the Caps, taking a feed at the Caps’ blue line from Josh Bailey, skating down the right side, and firing a shot past goalie Braden Holtby’s glove that Holtby might want to have back.  The Islanders had a 1-9 lead 6:06 into the game.

The Caps evened the game late in the period on fine efforts by Brooks Laich and Marcus Johansson.  Laich applied pressure below the Islanders goal line prying the puck away from goalie Jaroslav Halak, then outdueling Nick Leddy for the loose puck, sliding it out to Johansson stepping down the right wing.  Johansson took the pass in stride and wired a shot past Halak’s blocker, and it was 1-1 with just 56.3 seconds left in the first period.

That would do it for the Caps on the scoreboard.   At the other end, the Islanders got a pair of second period goals, the first from Ryan Strome less than four minutes into the period.  John Tavares beat Michael Latta cleanly on a faceoff from the left wing circle in the Caps end.  He pulled the puck back to Strome who wasted no time snapping a shot over Holtby’s right shoulder to give the Islanders a 2-1 lead.

Mid-way through the period the Isles added some insurance.  With the Islanders applying heavy pressure in the Caps’ end, they worked the puck to the front of the net where it squirted out to Holtby’s left.  Josh Bailey got two whacks at the puck the second one sufficient to nudge it under Holtby and just over the line before Karl Alzner could sweep it out and under Holtby.

The Islanders got an empty net goal from Brock Nelson, his second goal of the game, with 1:20 left to give the visitors their final 4-1 margin.

-- The possession numbers favored the Islanders, who out-attempted the Caps, 65-55 overall.  It really was not that close.  In close score situations at 5-on-5, the Isles held a 36-18 advantage in shot attempts and a 13-8 advantage in scoring chances (numbers from war-on-ice.com).

-- Rough night for the defensive pair of Matt Niskanen and Karl Alzner.   Niskanen was on ice for all four goals against, Alzner for three.  Niskanen’s Corsi plus-minus at 5-on-5, close score situations, was minus-11, Alzner’s was minus-10.

-- Only one Capital – one – managed to finish as high as “even” in Corsi plus-minus at 5-on-5 close.  Alex Ovechkin finished even and was the only Cap with a “plus” Fenwick number in those situations (plus-4).

-- That one faceoff loss by Latta sticks out on a night that otherwise was kind to the Caps in the circle.  Latta was 7-for-9 overall, while the team went 39-for-62 (62.9 percent).

-- Twenty five shots on goal is not enough volume against Halak, and what made it worse was that Ovechkin had almost a third of those attempts (eight).  The other 17 skaters shared 17 shots, only Joel Ward having as many as three.  Ovechkin finished with 13 of the Caps’ 55 shot attempts.

-- The Caps had a lot of contributions on offense from the defensemen this season, but not against the Islanders.  That carried over into this game.  No points from defensemen, only five shots on goal.  John Carlson had five shots blocked.

-- It might not be the best time to bring this up, but Halak’s save percentage in the last four post season games he faced the Caps is .975 (155-for-159).  He has gone four straight playoff games against the Caps allowing a single goal.

-- Maybe the plan is to tenderize the Islanders.  The Caps were credited with 46 hits (the Islanders had 36).  Brooks Orpik had nine of them for Washington.

Keep telling yourselves, “it’s first to ‘four,’ not first to ‘one.’”  But the fact is that this series probably is going to turn on possession.  If the Islanders can dominate the possession numbers, it is evidence that the Caps’ “heavy” game is not being applied effectively.   In that context, what Caps fans might look for is the extent to which the steady application of such a “heavy” game wears down the Islanders before they can get to “four.”

Posted by The Peerless at 10:39 PM No comments: