The Peerless Prognosticator is ON THE AIR!!! -- Game 26: Capitals at Devils, December 6th

The Washington Capitals play the middle game of their three-game road trip on Saturday when they visit the New Jersey Devils in Newark.  The Caps and Devils find themselves separated by just two standings points with the Capitals holding the slim advantage in fourth place in the Metropolitan Division and a game in hand.

Neither team has been on fire of late.  Washington put aside a two-game losing streak in beating the Carolina Hurricanes, 2-1, on Thursday night but are still just 7-9-2 since October 25th.  That record, however, is almost radiant compared to that of the Devils over the past month.  Since winning their first game of November, 3-2, over the Columbus Blue Jackets, the Devils are 4-9-2, having just broken a five-game losing streak (0-3-2) with a 5-3 win in Toronto over the Maple Leafs on Thursday.

These are two different teams in another respect.  Washington has the second-best intra-division winning percentage (.714) in the Metropolitan Division going into Friday’s games.  The Devils are at 3-4-1 and have lost two in a row since beating the Caps, 1-0, on November 14th.

The Devils come into this game accompanied by Doctors Pierce, McIntyre, Hunnicutt, and Burns.  It is a M*A*S*H unit of injuries.  Eight players are listed on the injury report, including: Ryane Clowe, Bryce Salvador, Travis Zajac, Martin Havlat (all on injured reserve), Patrik Elias, Stephen Gionta, Adam Larsson, and Jaromir Jagr (all listed as day-to-day).  Those eight players represent 15 of the 62 goals scored by the Devils so far this season.

The injuries will put more pressure on leading goal scorers Mike Cammalleri (11) and Adam Henrique (7).  Cammalleri has been reasonably consistent in his goal scoring thus far, a four game drought being his longest of the season.  He has four tallies in his last six games, and he had the lone goal in the Devils’ 1-0 win over the Caps on November 14th.  Henrique has been a bit more spotty in his goal scoring, also with a four-game streak without a goal being his longest, but he has three in his last six games. 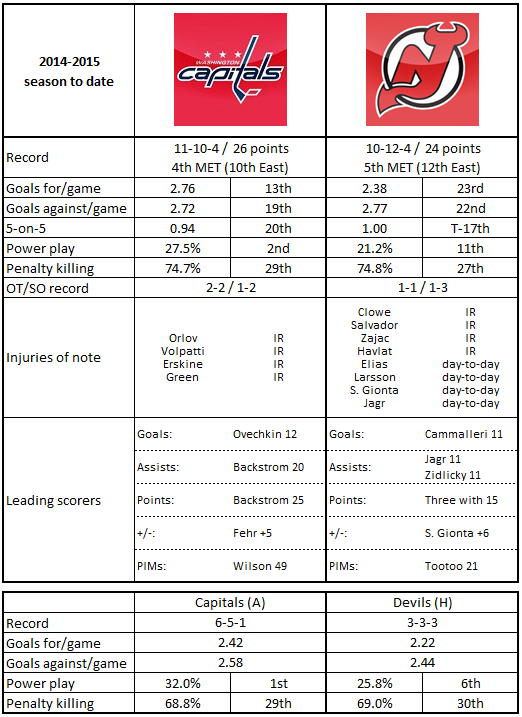 1.  Getting good starts against New Jersey is tough.  Only St. Louis and Minnesota have allowed fewer first period goals than the Devils, and they have trailed after one period only six times in 26 games (record: 2-4-0).

3.  In the first meeting of the season between these clubs, our prognosto featured defenseman Damon Severson as a “player to ponder.” http://peerlessprognosticator.blogspot.com/2014/10/the-peerless-prognosticator-is-on-air_16.html Severson had two goals in the 6-2 Caps win.  This time we might think about Jon Merrill.  After playing in ten games for the Devils to start the season, Merrill suffered an arm injury in Game 11 against Columbus that kept him out of action until he returned Thursday night against Toronto.  He had two assists, giving him six points in 12 games this season.  Attention might be paid.

4.  Jersey doesn’t do blowouts.  Only three times this season have the Devils played to a decision of three or more goals.  They won one of them, a 5-1 decision over Florida back in Game 2; and they lost twice, a 6-2 loss to the Caps in Game 4 and an 8-3 shellacking at the hands of the Pittsburgh Penguins in Game 9.

5.  Perhaps it is odd, but outshooting the Devils does not seem to be a path to success against that team.  New Jersey is 1-5-1 when outshooting their opponent, the second worst winning percentage in the league.  Their only win in these circumstances was a 2-1 Gimmick win over Winnipeg in Game 10.  The Devils have been outshot in nine of their last 11 games and are 4-3-2.  It might be best for Caps fans to shout, “DON’T SHOOOOOOOT!”

2.  The Caps did not allow a power play opportunity to the Hurricanes on Thursday, so they did not give up a power play goal.  That broke a run of three games in four in which the Caps allowed power play goals (5-for-13 on the penalty kill; 38.5 percent).

3.  The Caps are one of only five NHL teams without a game-winning goal from a defenseman this season.  Buffalo, Nashville, St. Louis, and Winnipeg are the others.

4.  On the other hand, the Caps are one of just six NHL teams with at least three defensemen with ten or more points (John Carlson – 18; Mike Green – 12; Matt Niskanen – 10).  Tampa Bay, Nashville, Anaheim, and the New York Islanders have three; Calgary has four.

5.  When Brooks Orpik records his first hit of the night in this game, he will become the first player in the NHL this season to reach 100 hits and 20 blocked shots.  He is currently tied for fourth in the former category, third in the latter.

Hey, remember this guy? Had a fine early career with the Devils (450 points in 548 games over his first seven seasons), then almost disappeared from the hockey planet by last season (ok, he played 46 games with the Florida Panthers…same thing).  In 203 games over four seasons prior to this one, Gomez recorded only 13 goals and famously went more than a year without one.  With Travis Zajac going on injured reserve, the Devils signed Gomez to a free agent deal last Monday.  With Patrik Elias and Jaromir Jagr in uncertain health, his presence takes on an added importance.  He has yet to record a point for the Devils in two games, but he is 10-22-32, minus-7 in 45 career regular season games against the Capitals.

When the Caps beat the Devils, 6-2, back on October 16th, Marcus Johansson scored the game-winning goal and recorded a pair of shots on goal, part of a start in which he had eight goals and 41 shots on goal in his first 16 games. It looked like a new, assertive, aggressive Johansson.  In his last nine games he has one goal and 10 shots on goal, and he looks like the old Johansson that often looked too much like a sidecar on the motorcycle of a scoring line.  The Caps could use some secondary scoring, but Johansson is a scoring line winger.  The new Johansson needs to step up more often.  In 15 career games against the Devils he is 2-2-4, minus-3.

The Devils are a club that the Capitals are likely to be fighting all season long for a playoff spot.  They have split two games so far with New Jersey with three meetings left, starting with tonight’s contest.  Challenges are opportunities (we read that somewhere).  Playing a team on the road that employs a difficult system is certainly a challenge.  But it is an opportunity to put two more points between themselves and the Devils.  Given the teams’ rather “special” special teams – the Devils rank last in home penalty killing while the Caps are 29th in road penalty killing, both under 70 percent – it could turn on man advantages.  And we know who has the better man advantage.

Posted by The Peerless at 8:21 AM No comments: