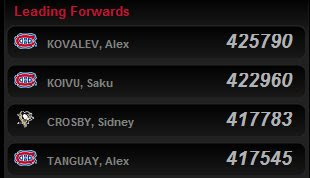 Well, it finally happened. The Canadiens' stranglehold on the top three spots among Eastern Conference forwards in the All-Star Game voting has been broken...you've probably guessed by whom, without looking at the graphic. But we wonder...how? Could it have been... 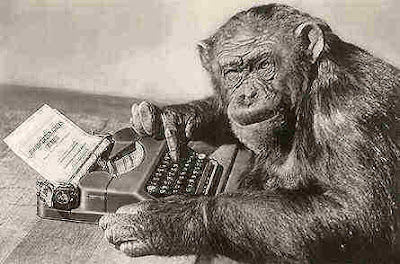 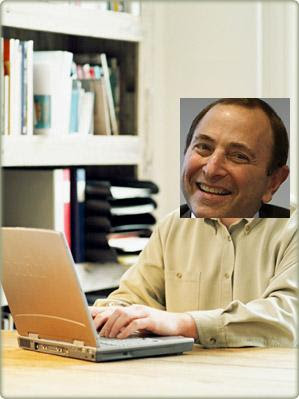 A tremor in the force...

"Alex Ovechkin was given the day off to recover from an undisclosed nagging injury. Boudreau said there's a 99 percent chance he'll suit up tonight."
Given that there are seven other guys who almost certainly won't dress for tonight's game against the Islanders who did dress for opening night, even a one percent chance Ovechkin won't suit up is cause for skipped heartbeats in Caps Nation. Why? Well, if Ovechkin were to sit out, your top goal scorer heading into tonight's game would be...

The Peerless Prognosticator is ON THE AIR!!! -- Caps vs. Islanders, December 4th

We’re live at Peerless Central to bring you the best that the prognosticatorial arts can provide as the Caps host the New York Islanders at Verizon Center. The guests tonight being the Islanders, with their long tradition of goofy logos depicting a variety of piscatorial scenes, we have a special guest with us to give us some insight into how those who labor in and by the sea follow the sport of hockey. Welcome…uh…

Welcome, Ishmael. I imagine that being at sea on whaling voyages, you don’t have much occasion to see hockey games live. How is it you came to be a fan of the sport?

“These are the times of dreamy quietude, when beholding the tranquil beauty and brilliancy of the hockey rink’s ice, one forgets the tiger heart that pants upon it; and would not willingly remember, that this velvet paw but conceals a remorseless fang.”

Ah, so you’re a fan of the fisticuffs…

“It smells like the left wing of the day of judgment.”

“There is a Capital ‘weagle’ in some souls that can alike dive down into the blackest gorges, and soar out of them again and become invisible in the sunny spaces. And even if he for ever flies within the gorge, that gorge is in the mountains; so that even in his lowest swoop the Capital ‘weagle’ is still higher than other birds upon the plain, even though they soar."

Sort of sets him apart from the run of the mill hockey player. What is it about the sport that draws you to it?

“Whenever I find myself growing grim about the mouth; whenever it is a damp, drizzly November in my soul; whenever I find myself involuntarily pausing before coffin warehouses, and bringing up the rear of every funeral I meet; and especially whenever my hypos get such an upper hand of me, that it requires a strong moral principle to prevent me from deliberately stepping into the street, and methodically knocking people's hats off--then, I account it high time to get to a hockey rink as soon as I can. This is my substitute for pistol and ball. With a philosophical flourish Cato throws himself upon his sword; I quietly take to the ice.”

What’s your take on the latest player in the news, Sean Avery?

“Is he mad? Anyway there's something on his mind, as sure as there must be something on a deck when it cracks.”

What makes you say that?

"I began to be sensible of strange feelings. I felt a melting in me. No more my splintered heart and maddened hand were turned against the wolfish world. This soothing savage had redeemed it."

Avery? A “soothing savage?” Well, that’s a new one on me…as for the Islanders, what’s your take on their prospects this year?

“Give me a condor’s quill! Give me Vesuvius’ crater for an inkstand! Friends, hold my arms! For in the mere act of penning my thoughts of this Leviathan, they weary me, and make me faint with their outreaching comprehensiveness of sweep, as if to include the whole circle of the sciences, and all the generations of whales, and men, and mastodons, past, present, and to come, with all the revolving panoramas of empire on earth, and throughout the whole universe, not excluding its suburbs. Such, and so magnifying, is the virtue of a large and liberal theme! We expand to its bulk. To produce a mighty book, you must choose a mighty theme. No great and enduring volume can ever be written on the flea, though many there be who have tried it.”

So you’re saying we don’t know?

It’s been tough on Islander followers the last few years. Can you describe what it’s been like for your typical fan?

“He piled upon the Nassau Veterans Memorial Coliseum’s white hump the sum of all the general rage and hate felt by his whole race from Adam down; and then, as if his chest had been a mortar, he burst his hot heart's shell upon it.”

So, is there any hope for the Islanders?...Do they have a chance this year? Or will the whole team need an overhaul? Is there anyone the Islanders can count on in the years ahead to lead them back to a championship?

“The drama's done. Why then here does any one step forth? --Because one did survive the wreck.”

Ah…with his contract, that must mean Rick DiPietro.

As for the game, here is your fun Islander number…34.

That would be the number of even strength goals the Islanders have scored this year, 29th in the league (ahead of only Ottawa). That speaks to an advantage for the team that has the deeper offense (even with the injuries). Add to that the fact that the Caps are 6th in the league in power play goals scored at home, and this should not be a game that lacks for offense, at least from the home club.

But hold on, Skippy…the Islanders are not a club that plays in many blowouts, either. Only two teams in the league have played in fewer three-plus goal games (Minnesota, which should surprise no one, and Detroit, which should inspire a “whaaaaaa?”). The Isles are 1-3 in those games decided by at least three goals. Conversely, they are a respectable team in one-goal contests, going 6-4-2, good for a tie for 17th in winning percentage (the Caps are 4-3-3, tied for 21st). Here are some of the other numbers to note... 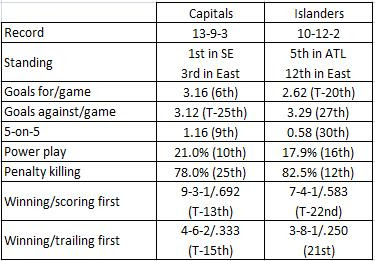 Individually, New York is coming into this game with an injury list that rivals the Caps. DiPietro, Bruno Gervais, Radek Martinek, Mike Comrie, Mike Sillinger, Kyle Okposo -- all are banged up. The heavy lifting with respect to the offense will be left to leading overall scorer Doug Weight (5-17-22) and top goal-getter Trent Hunter (ten). Weight hasn’t had any particular success against the Caps in the goal scoring are (three in 29 career games), but has 21 assists against Washington. Hunter can claim an even-strength, a power play, and a shorthanded goal to account for the three he’s scored against the Caps in 17 career games.

However, the Cap-killer here is Jon Sim. He might have skated for eight NHL teams in his career, but the constant seems to be an ability to score against Washington. In 21 career games, he is 11-8-19, with four power play and two game-winning goals.

That team-wide even strength problem shows up in the plus-minus numbers, where only two players are on the positive side of the ledger – defensemen Andy Sutton and Brent Skinner. On the other side, Jeff Tambellini and Bruno Gervais (the latter being out for this one) are on a pace to top -30.

In goal, with DiPietro out recouperating from a knee injury, the chores are likely to fall to Joey McDonald, a fellow who has an unsettling resemblance to Jerry "The Beaver" Mathers. One might be forgiven if they hadn’t heard of McDonald, seeing as how he had a grand total of 17 games of NHL experience over two seasons coming into this year. He's had a respectable run as DiPietro's replacement thus far, though -- 10-9-2, 2.89, .907. If there is a number that is key for McDonald in this one, it is this...three. Over his last nine games, in those in which he's allowed three or fewer goals, he won. More than three?...loss. He is 6-3-0 over that stretch. He was also the NHL's third star of November.


The Peerless' Players to Ponder

Mark Streit might have signed the big free agent contract and has posted the best offensive numbers from the blue line (5-12-17), but part of the trick in allowing three or fewer goals is to get some solid play out of the blue line in the defensive zone, and Witt could be the one to set the tone there. Witt missed a dozen games with the dreaded "lower body injury," and he has struggled some in his return (0-1-1, -4 in six games). He is no longer a minutes eater, and Andy Sutton might be the more physical defenseman at this point in their respective careers, but it is an opportunity to make a point against his former team.

Continuing the theme of "former team," Kozlov is in a position to return the favor to the Islanders, a team for which he had his highest goal-scoring season (25, in 2006-2007). Since sitting out against Tampa Bay on November 10th, Kozlov is 3-7-10 in 11 games. If the Caps are going to make McDonald's night in goal difficult, Kozlov needs to be involved.

The recipe for this one is to jump on the Islanders early at even strength and keep pushing. If the Islanders hang around, keeping the game close into the third period, they've found ways to win (six of their ten wins being of the one-goal margin variety). The Caps having a third of their lineup out, and the biggest impact perhaps on the blue line, they're going to have to score and score often against a goalie who has never faced the Caps. It'll be a struggle, but we think they will...

Posted by The Peerless at 4:01 AM No comments: