It could have been a game that would have Washington Capital fans muttering, but when the final horn sounded in the Caps’ 4-2 win over the Columbus Blue Jackets, fans couldn’t complain about the Caps winning their third straight.  It is the Caps longest winning streak of the season.

For the Blue Jackets it was their ninth straight loss, tying a franchise worst.  It stared poorly for the visitors just 96 seconds into the game when Marcus Johansson got the Caps off and running.  It started with Andre Burakovsky controlling the puck along the right wing wall in the Columbus end and centering it for Troy Brouwer between the tops of the circles. Brouwer’s shot attempt was interrupted in its follow-through by Adam Cracknell.  The shot was further muffled on its way to the net, but goalie Curtis McElhinney could not control it.  Johansson darted across the crease, kicked the puck to his forehand, and slid the puck past McElhinney’s right pad to open the scoring.

Six minutes later it was Alex Ovechkin converting a power play.  With Brian Gibbons and Fedor Tyutin in in the penalty box to give the Caps a 5-on-3 advantage, the Caps worked the puck around the perimeter until Mike Green fed Ovechkin in his office in the left wing circle.  Ovechkin slammed a one-timer past McElhinney’s blocker to make it 2-0 at the 7:49 mark.

The Blue Jackets halved the Caps’ lead barely two minutes after Ovechkin’s goal when Boone Jenner beat Nicklas Backstrom on a faceoff to goalie Braden Holtby’s left.  Jenner drew the puck back to Cam Atkinson who fired through a screen and past Holtby to make it 2-1 just before the ten-minute mark of the period.

The Caps regained their two-goal lead with just under four minutes in the period when the Caps executed a passing sequence that looked more like the Harlem Globetrotters than ice hockey.  Ovechkin started the play when Fedor Tyutin’s pass through the middle of the neutral zone to Jenner was a bit too long.  The puck squirted off the end of Jenner’s stick where Ovechkin picked it up on the Caps’ logo at center ice.  Ovechkin backhanded a pass to Nicklas Backstrom at the Columbus line, and Backstrom touch-passed the puck to Jay Beagle entering the offensive zone.  Beagle took a couple of strides in, and with Tyutin challenging him, Beagle drop-passed the puck back between his legs to Ovechkin trailing.  Ovechkin stepped up and leaned into one, wristing the puck over McElhinney’s glove to make it 3-1 at the first intermission.

The second period was scoreless until the final minute when David Savard cut the Caps’ lead to a goal.  A Fedor Tyutin wrist shot from the right point handcuffed Braden Holtby and popped into the air.  Holtby seemed to have some difficulty locating the puck, which dropped to the ice to his right.  Trying to fight past Troy Brouwer, who was locked up with Boone Jenner at the post, Holby kicked the puck into the net with his right skate to make it 3-2 at the second intermission.

The Caps held on in the third period, denying Columbus the tying goal, finally getting the insurance goal for themselves, courtesy of Marcus Johansson with 5:21 left.  Johansson started the play by taking a pass from Nate Schmidt at the red line.  Johansson skated the puck down the left wing wall into the Columbus zone, then left the puck for Andre Burakovsky.  Johansson took a return pass from Burakovsky below the Blue Jackets’ goal line, then continued around the back of the net, finally stuffing the puck past McElhinney on a wrap-around inside the far post for the final 4-2 margin.

-- Marcus Johansson recorded eight shots on goal, a career high.  It was his fourth career multi-goal game, his first since he recorded a pair on January 9, 2012 in a 5-2 loss to the Los Angeles Kings.

-- For Alex Ovechkin it was his 88th career multi-goal game, by far the most in the NHL since he entered the league in 2005-2006 (Jarome Iginla: 64). With his eight shots on goal, he and Johansson combined for half of the Caps’ 32 shots on goal.  On the other hand, while Ovechkin had six shots on goal in the first period, he had only one in each of the second and third periods.

-- Andre Burakovsky had two assists.  That makes three multi-point games this season for the rookie and points in nine of the 15 games in which he has played.  His 12 points is tied for second in points among rookies (Filip Forsberg: 15).

-- The Caps’ penalty killers were very efficient.  Not only did they hold the Blue Jackets without a power play goal for just the fourth time this season, but they held Columbus to only four power play shots in eight minutes of power play time.

-- Jason Chimera had a strange night.  He was a victim of a bad icing call when he had position getting to the puck, he had his stick splinter as he was taking a shot on a good scoring opportunity, and he was a team-worst Corsi minus-10 at 5-on-5 (tied with Brooks Orpik).

-- As an empirical matter, the Caps had it all the way… 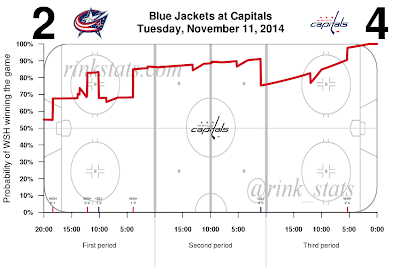 …if you were watching, you probably were not convinced (graph from rinkstats.com)

-- You like symmetry?  How’s this?… the Caps were 14-for-21 in offensive zone faceoffs, 14-for-21 in defensive zone faceoffs.  One of the reasons we tried to rationalize Jay Beagle on the top line was that he gave the Caps another faceoff option if Backstrom should get thrown out on an important draw.  Who knew he’d have more assists (one) than faceoff wins (none on one draw taken).

-- Nate Schmidt had an assist.  It is his first point of the season and first since recording a goal in a 4-1 win over the New York Rangers on December 8, 2013 (a streak of 17 games without a point).  Odd Schmidt stat… he has precisely one shot on goal in each of his last seven games.

-- Evgeny Kuznetsov skated a total of 7:48 in ice time, his lowest total since opening night against Montreal (6:36).  It is the first time in his career he recorded less than ten minutes in ice time in consecutive games.

-- Cam Atkinson’s goal for Columbus was his fifth career goal against the Caps, the most he has against any team in the NHL.

Odd as it might sound against a team on an eight-game losing streak, the object of the exercise was not to be the team that served to end that streak.  However, past that it was not a game that one can be entirely happy with.  After dominating for 20 minutes and seeing the body English on the Columbus bench look like that of a team on, well, an eight-game losing streak, the Caps took their foot off the gas.

Just as they did against Carolina last Saturday, they let the Blue Jackets hang around far longer than they should have.  Columbus being a team decimated by injuries with a less-than-average goalie getting the call, this game had the makings of a rout early on.  That it wasn’t said more about the Caps – who still have issues going for the jugular in games – than it did about Columbus.  A win is a win, though, and two points are always better than none.

Posted by The Peerless at 11:02 PM No comments: