The Stanley Cup champion Washington Capitals opened the defense of their championship with an uneven Week 1 of the regular season.  The banner-raising Opening Night was everything a Caps fan could hope for, from seeing the first championship banner in team history hoisted to the rafters to a thoroughly dominating 7-0 win over the Boston Bruins.  While the offense still shined in Game 2 against the Pittsburgh Penguins, the defense blew a gasket in allowing seven goals in a 7-6 overtime loss. 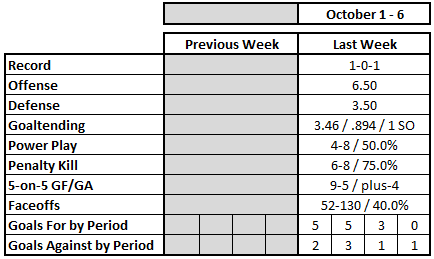 For the third straight season, the Caps opened the regular season with points in their first two games (2-0-0 last season, 1-0-1 in 2016-2017), defeating the Boston Bruins in the season opener on Wednesday night, 7-0, and then dropping a 7-6 overtime decision to the Pittsburgh Penguins on Thursday.  The win in the opener against Boston was the fifth straight season opener in which the Caps earned at least one point (3-0-2) and the sixth straight home opener in which they earned at least one point (5-0-1).

The road opener extended a string of good luck for the Caps as well, despite the overtime loss, earning a point for the fifth straight time in a road opener (3-0-2).

The Capitals did not lack for offense in Week 1.  The 13 goals scored by the Caps in the two games was a replay of last season’s first two games in which they recorded 10 goals in their first two contests.  The difference this year was that the good times were spread more evenly.  Last season, Alex Ovechkin had seven of the team’s 10 goals in Games 1 and two, and three other Caps had a goal apiece.  This time around, T.J. Oshie led the Caps with three goals, three other Caps had two, and eight Capitals in all had at least one goal.

In the two games in Week 1, 18 skaters dressed, and 15 of them recorded points.  Six of them had at least two points including defenseman Brooks Orpik, whose goal against Pittsburgh to close the week ended a 182 game streak of regular season games without a goal dating back to February 26, 2016, when he had a goal in a 3-2 win over the Minnesota Wild.  An example of how much turnover can take place in a short amount of time, only nine skaters from that night (including Orpik) are still with the club.

It was all or nothing in Week 1, or more accurately, nothing or all.  The Caps held the Boston Bruins to 25 shots in the opener.  Last season they held opponents to 25 or fewer shots ten times, but only twice in their first 27 games, so this might have been taken as a good sign.

The Caps started poorly in one area that plagued them most of last season.  They were on the wrong side of the shot attempts at 5-on-5.  Washington was a minus-4 against the Bruins in the opener, although that was more the product of having a lead almost from the opening puck drop.  They were minus-5 when ahead, which the Caps were for all but 24 seconds in the contest.

Against Pittsburgh it was a different story.  The Caps were underwater with the game tied (minus-8), when they were in close situations (minus-10), and when they were behind (minus-5).  They managed to break even when ahead and were minus-13 for the game.

Braden Holtby got the nod in both games of Week 1, and he started pretty much where he left off last spring.  His 25-save shutout against Boston in the opener was his first regular season shutout since he pitched a 24-save shutout in beating the New York Rangers on April 5, 2017.  The shutout snapped a personal string of 55 regular season appearances without a shutout.  It was his 33rd career blanking, drawing him to within two shutouts of Olaf Kolzig for most in franchise history.

That run lasted one shot against Pittsburgh. Penguin defenseman Jamie Oleksiak scored on the first shot of the game, the Penguins' third, and their seventh.  Holtby ended up allowing seven goals on 41 shots in the 7-6 overtime loss.  It was the first time in Holtby’s career that he allowed as many as seven goals in a game.

It took the Capitals two seconds on their first power play of the season to convert the opportunity.  Yes, it was one of those bouncing pucks that a goaltender just cannot get a handle on, but Evgeny Kuznetsov was right there to pounce on the opportunity.

And then for good measure the Caps converted on their second power play of the season, this one in a more conventional way with Alex Ovechkin one-timing a pass from the top of the left wing circle.

The Caps ended up punishing the Bruin penalty killers for four power play goals on six opportunities, those four goals coming on ten shots in 7:34 of power play ice time.  The Caps were so dominant with the man advantage that by the time they used it to build a large lead, every skater finished the game having logged some power play time.

It was a much quieter power play in the second game of the week.  The Caps enjoyed only two power plays against Pittsburgh, no power play time after the 6:13 mark of the second period.  And, they managed only two shots over the four minutes of those two man advantages (Ovechkin, John Carlson).

The penalty kill was a mirror image of the power play in Week 1.  Against Boston the Caps found themselves shorthanded only twice, killing both and allowing only two shots on goal over the four minutes of shorthanded ice time.  Neither of the shots came from the dangerous David Pastrnak or Brad Marchand, each of whom had 2:03 of the Bruins four minutes of power play ice time.

It was a different story against the Penguins.  Washington was disciplined early, putting themselves a man down once in the first period (the Penguins scored on a power play goal by Jake Guentzel) and once in the second period with no damage done.  Then, the wheels came off.  Brett Connolly took a penalty 39 seconds into the period, and that was followed by penalties taken by Madison Bowey at 3:53 and by Jakub Vrana at 8:40.  The Caps killed those penalties off, but their luck ran out in overtime.  Evgeny Kuznetsov took a hooking penalty 19 seconds into the extra frame.  Just 61 seconds later, Kris Letang made the Caps pay, blunting a comeback from a two-goal deficit in the third period.

One of the more noteworthy items for the week was Kuznetsov taking a regular turn killing penalties.  His 3:49 in shorthanded ice time for the week almost equaled his entire total for last season (4:35).

It was an awful week in the circle for the Caps.  Boston has been an adept group in this phase of the game for some time, but the Caps losing 41 of 60 draws was unusual.  The 31.7 percent winning percentage was their worst since they won just 27.6 percent of their draws (16-for-58) in a 4-3 win over the St. Louis Blues on April 8, 2014.  The Caps were especially unsuccessful in the offensive zone, winning only six of 25 faceoffs (24.0 percent).  Only Brett Connolly and Andre Burakovsky were over 50 percent for the game, both players winning the only draw they took.

That performance almost made the 33-for-70 performance against Pittsburgh a dominating one.  The Caps did a better job in the offensive zone against the Penguins, but not much, going 9-for-23 (39.1 percent).  They did win the defensive zone (10-for-17/58.8 percent) the only zone they won in the two games for the week.

Individually, none of the four players taking at least ten draws for the week were as successful as 45 percent of the time.  Nicklas Backstrom was 18-for-41 (43.9 percent), but his performance was mitigated in part by a 9-for-12 (75.0 percent) performance in the defensive zone.  Lars Eller was 43.5 percent on a 10-for-23 week, but he did manage to win half of his eight offensive zone draws. 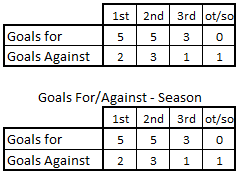 Here too, though, the two games were quite different, in this case the scoring early in periods.  The Caps opened Banner Night against Boston with two goals before the first period was two minutes old.  However, against the Penguins the Caps allowed a goal in the first two minutes of the first and second periods, as well as the overtime game-winner, and in the third period they allowed a goal less than three minutes into the period.

The Caps had an eventful Week 1, what with the distractions of a banner-raising ceremony in the season opener and having to go on the road the next night to face their most bitter rival, rested and ready for their own season opener.  Getting three of four points out of that scenario is hardly the worst outcome, especially since the Caps fought back from a two-goal deficit in the third period to earn a standings point in Pittsburgh.

The trick now will be maintaining an edge with a long layoff until they take the ice again on Wednesday against the Vegas Golden Knights, and then in another back half of a back-to-back in New Jersey against the Devils.  It is part of a stern test in which four of the first five teams that the Caps will face to open the season recorded more than 100 standings points last season, and the fifth – New Jersey – had 97 points.   So far, though, the Caps have done nicely to start the season.