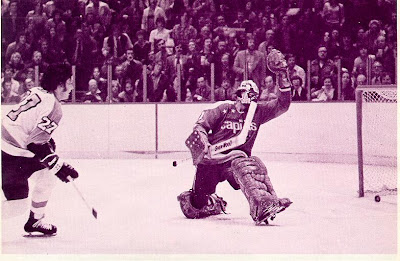 Capitals fans are a curious bunch. Not so much the fans of more recent vintage, but those of us who have been around since they used horse hair in the goalie pads. And if there is one thing that binds us, it is our unshakeable belief, cured in the furnace of years of disappointment, that whatever happens to the Caps, it will probably end up being bad. Game winning goals against the Caps in a fourth playoff game overtime… twice… at home! Losing in the first round of the playoffs… 13 times in the last 27 years (the number “13” seems especially fitting). Esa Tikkanen. You folks know the drill.

But you know something? August, on top of being the deadest month of the hockey year, is also the month where hope can take root. And for Caps fans, that might mean, “it could always be worse” as much as dreams of a Stanley Cup. So with that, we went leafing through the NHL record book to see just how things could be (but likely won’t be soon) worse, like the team records of regular season futility (minimum 70 game schedule)…

Then there are the land…er, ice speed records…

And the tag team records…

-- Most points by a player in his first NHL season, one game: The Stastny’s in that February 1981 game.

And of course, the obligatory Wayne Gretzky reference …

-- Most assists, one game: Wayne Gretzky, 7 assists against Washington, February 15, 1980, in an 8-2 Oilers win.
-- Most assists by a player in his first NHL season, one game: Gretzky (tied with Billy Taylor and himself on two other occasions)… he was a first-year NHLer in that Washington game.

So, dear Caps fans, not signing this guy or trading that guy to add another piece to or subtract one from a loaded team might be annoying, but there was once a time when the Capitals were not merely bad, they were record-setting, record-enabling, eight-day old yogurt on the counter bad.

Smile, Caps fans. Only four weeks or so to training camp.
Posted by The Peerless at 10:57 PM 1 comment:

Searching for a Theme

Here we are in the middle of August, when the only ice people think about is that cooling down their favorite adult beverage. But behind the scenes, deep in the bowels of NHL team offices, the marketing types have been in full creative mode coming up with their themes for the 2010-2011 season. And nowhere is that theme more clearly stated than on the banners of those NHL teams on their respective web sites. Some, though, scream, “GO BACK AND DO IT AGAIN!” The cousins and yours truly have been perusing the sites and have some thoughts…

At the top of the list, we have the Chicago Blackhawks, the Stanley Cup Champions?

"The what?"
"The Stanley Cup Champions, you ignoramus."
Fearless, leave him be.  It's an honest mistake.


"Well, how can ya tell they're the champs? They have that squiggly little picture…"
“…it’s an ‘icon,’ Cheerless.”
“OK…EYE-con over there on the right. You’d think they wuz embarrassed to be the champs. And what’s with putting AT&T up in front before the championship EYE-con?”
“Because AT&T is putting up the money?”
And then we have the other contestants, those who didn’t win this time, but aren’t shy about telling us how often they did win…

“Isn’t that like a middle age lady telling us she was the prom queen way back when?”
“Don’t be a chauvinist.”
“And what’s with the phone companies… there’s Bell, and there’s AT&T again.”
There does seem to be a theme emerging. But while we have champions past and present pushing their Stanley Cup success, we have the runner-up…

"That’s like Pat bragging that he’s got the ‘second best cheesesteak in Philadelphia.’”
“Or Geno…”
“There is no ‘Geno’…the guy who founded it is named ‘Joey’”
“So then why aren’t they the ‘Altoona Flyers?’”
Guys?... OK, so then we have the simple, “thank the fans” message from one team…

“I’d have thought it would have said, ‘home of Sidney Crosby.’”
Well, when you don’t have anything else, thank the fans…the ones who are paying for that new arena.

“Did you know ‘Consol Energy Center’ is really an anagram for ‘Reelect Sonny Conger?’”
“Maybe he should have his name up there.”
Then there are the loud and the proud, teams that are, well, their teams…

“Who’d brag about being ‘Jersey’s Team?’”
Is there another team in Jersey?


“There are the Nets…”
The defense rests.

“Hey cuz, there’s that ‘Bell’ thing again. I wonder if they get charged by the minute it’s up on that banner.”
And that Ottawa theme sounds rather defiant... MY town, MY team.

Yeah, well, at least that makes a little more sense than some of these other themes…

“That’s the Hockey Way?” I half expect Stompin’ Tom Connors to be the coach here.

"Yeah, and then they start singin’…

“Hello out there, we're on the air, it's 'Hockey Night' tonight.
Tension grows, the whistle blows, and the puck goes down the ice.
The goalie jumps, and the players bump, and the fans all go insane.
Someone roars, "Thrashers Suck!", and the other fan tells him to pipe down.”

And what about the Wild’s “tradition” theme?


“Uh, yeah… nine years, six of them out of the playoffs, two other times losing in the first round. If tradition is in their blood, it’s got a blood-alcohol level of about a point-three-oh.”
"And you'd know all about that whole blood-alcohol thing, eh?"
"Everyone needs a hobby..."

We only have one team going with the tried-and-true alliterative theme, the Kings and the “Pride=Passion=Power” theme.


“Yeah, nice touch with the equals signs.”
“Wonder if all o’ that equals a ‘playoff’ round win… they’ve had one in the last 16 seasons.”

Then there is this study in minimalism by the Canucks. Logo on the left, Web address on the right, all that empty space in the middle.

“Yeah, kinda like Roberto Luongo’s five hole.”
Not the thing we think they were looking for.