The Washington Capitals had a third period lead against the Columbus Blue Jackets, but they could not hold it as the Blue Jackets tied things late in the third period and won the contest in overtime, 2-1.

The teams fought to a scoreless draw in the first period and almost escaped the second period without a goal recorded.  However, late in the middle frame, Nicklas Backstrom took a Brooks Orpik pass in stride, skated through the neutral zone, eased in down the middle, and snapped a shot past the glove of Sergei Bobrovsky.  The goal at the 15:43 mark would be the only scoring through 40 minutes.

It might have been enough, but Zach Werenski, who seemed to be all over the ice in this game, tied it 13 minutes into the third period with a laser that beat goalie Philipp Grubauer on the glove side off the post to make it 1-1.

That would be all the scoring in regulation, a goal by Nicklas Backstrom having been disallowed on video appeal due to an offside.  In overtime, the Blue Jackets ended things in the first minute when Brandon Dubinsky won a draw, Cam Atkinson picked up the loose puck, and Atkinson snapped the puck past Grubauer’s blocker for the 2-1 Columbus win.

-- Washington and Columbus combined for a total of just 28 shot attempts and 11 shots on goal in the first period.

-- At one point, Justin Williams, Dmitry Orlov, and Lars Eller had nine of the Caps’ 16 shot attempts and half of the team’s six shots on goal.  That is not a good mix for the offensive load early in games.

-- The Caps had three shots in the third period, none in overtime.

-- The Caps had two power play shots (no goals) in 3:31 of power play ice time.  Alex Ovechkin and John Carlson were the shot makers.  Again, nothing low or in the middle.  There just seems to be a general lack of aggression on the man advantage.

-- We noted in the prognosto that Cam Atkinson has been something of a one-trick pony so far, being mostly a power play phenomenon.  He did have three of Columbus’ five power play shots, and Nick Foligno and Sam Gagner contributed a shot.  It suggested that Philipp Grubauer was the Caps’ best penalty killer.

-- Brooks Orpik had an assist on the night, his fourth assist and point of the season.  All of them have come on the road.

-- T.J. Oshie led the Caps in shot attempts for the evening, getting a total of seven (3 shots on goal, 2 missed shots, two shots blocked).

The Caps are a team in a fog at the moment.  Their offense has no continuity, their power play has no cohesion, and they can’t seem to hold a lead when they get one (late leads lost to Chicago in a win and in this game).  Last season, the Caps had a unique ability to keep one loss from becoming two, even if they were not playing particularly well.  So far this season, the club looks as if it is still sleepwalking a bit after their loss to the Penguins in the second round of the postseason.  Well, they get to do something about that on Wednesday night.

Posted by The Peerless at 10:04 PM No comments:

The Peerless Prognosticator is ON THE AIR!!! -- Game 15: Capitals at Blue Jackets, November 15th

The Washington Capitals wrap up their three-game road swing with a visit to Nationwide Arena in Columbus, Ohio, to face the Metropolitan Division rival Blue Jackets.  The Capitals will be looking to salvage a winning road trip after splitting their first two games, an overtime win against the Chicago Blackhawks last Friday and a loss in Raleigh to the Carolina Hurricanes on Saturday.

Columbus comes into this contest having alternated wins and losses over last five contests (3-1-1), with all three wins at home, against the Montreal Canadiens, the Anaheim Ducks and the St. Louis Blues, and losing both games on the road, to the Blues and to the Boston Bruins.  Scoring has been something of an all or none proposition for the Blue Jackets in this five-game run, managing only six goals in the middle three games of it, but bookending those three games with a 10-0 win over Montreal to start the run and an 8-4 win over St. Louis in their most recent contest, last Saturday.

Overall, Columbus has 24 goals in their last four games, propelling them into second place in the league in scoring offense (3.46 goals per game; the New York Rangers are first at 4.06 goals per game).   It is a team with a certain balance among its goal scorers.  No Blue Jacket ranks in the top-20 in goal scoring, but there are seven players with four or more goals among 21 players to dress for Columbus so far this season.

That group is led by Nick Foligno and Sam Gagner.  Foligno, now in his fifth season with the Blue Jackets after spending his first five NHL seasons with the Ottawa Senators, is on a pace to rebound smartly from what was something of a disappointing 2015-2016 campaign.  After recording his first career 30-goal season in 2014-2015 (31), he recorded only 12 goals in 72 games last season.  Four of his six goals this season have been posted in his last five games (4-3-7, plus-3), and he has been a remarkably efficient shooter overall so far.  His six goals have been recorded on a total of 18 shots.  In 26 career games against the Caps, Foligno is 6-12-18, plus-3.

Sam Gagner is in his first seasons in Columbus after signing a one-year/$650,000 contract with the Blue Jackets last summer.  Gagner, a former sixth-overall draft pick (2007), is with his fourth NHL organization in his tenth season.   Over his first eight season he had the double-whammy of being something of an underachiever and being consistent at it in terms of production.  From 2007-2008 through 2014-2015, he never scored fewer than ten goals in a season or more than 18.  Last season he managed just eight goals in 53 games with the Philadelphia Flyers, none of them in his last 11 games.  He is 6-1-7, plus-1, over his last seven games.  Gagner is 1-1-2, minus-6, in 11 career games against Washington.

Zach Werenski is the only defenseman among the seven Blue Jackets with four or more goals.  He has had a fine start to his NHL rookie season, leading all league rookie defensemen in goals (four) and points (12).  Three of those four goals recorded so far have been recorded on the power play.  Werenski’s 21:46 in ice time per game is second among rookie defensemen.  He will be coming into his first career game against Washington with points in nine of his 13 games so far. 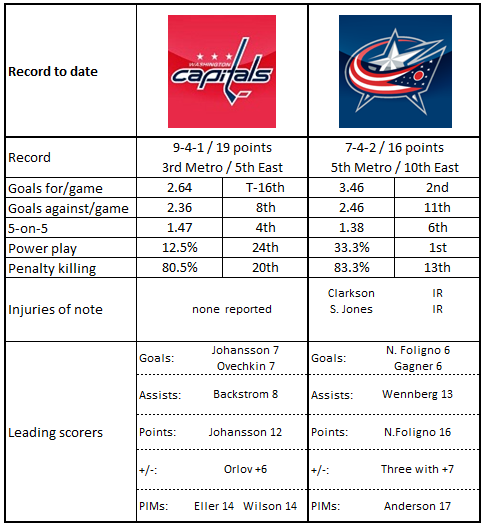 1.  Columbus has the lowest shots per game in the league (26.9), but they have the second best shooting percentage (12.9 percent), trailing only the New York Rangers (13.9 percent).

2.  Doing the little things not so well… Columbus is 29th in faceoff winning percentage (46.5 percent), ahead of only the Winnipeg Jets (45.0 percent).

4.  No team has allowed opponents to score first fewer times than the Blue Jackets.  Only twice has Columbus allowed the first goal of a game.  Oddly enough, those instances came against the same opponent, the San Jose Sharks.  Columbus lost both games, 3-2 at home on October 15th and 3-1 in San Jose on October 27th.

1.  If you are thinking Alex Ovechkin is off his goal scoring game, remember that he has seven goals in 14 games so far.  Through 14 games last season he had eight goals, and in 2014-2015 he had six goals through 14 games.  In both seasons he finished with at least 50 goals.

2.  The Caps have had the second fewest instances in the league of teams scoring first so far (three) and are 1-2-0 in those games.

4.  The Caps have had balanced ice time among their skaters.  Only Brett Connolly, having played in just seven games, is averaging less than ten minutes of ice time per game (8:57).

5.  The Caps continue to rank among the better teams in possession, sitting in eighth place in Corsi-for at 5-on-5 overall (52.14 percent; numbers from Corsica.hockey).  They also rank eighth in Corsi-for away from Verizon Center (51.77 percent).

While Cam Atkinson has had a productive start to the 2016-2017 season (4-8-12), he has been something of a one-trick pony so far.  Consider his last game, that against the St. Louis Blues.  The Blue Jackets won, 8-4, and Atkinson had four assists, three of them at even strength.  That brought his season total of even strength points to four (all assists).  Atkinson is 4-4-8 on the power play so far.  His four power play goals is tied for fifth in the league, and his eight power play points is tied for fourth.  He appears to be vulnerable as an even-strength player.  His personal Corsi-for at 5-on-5 is just 43.64 percent, and his minus-5 is tied for worst on the club.  Atkinson is 7-4-11, plus-4, in 13 career games against the Capitals.

Dmitry Orlov is averaging more than three more minutes per game (19:24) than he did last season (16:02) and is less than a shift’s worth of time behind his career best average time on ice (19:36 in 2013-2014).  The increased ice time has not come with bigger offensive numbers; his 0-4-4 scoring line lagging behind last year’s pace (8-21-29 in 82 games).  However, he has been addressing the matter of responsibility in his own end.  Eight straight games now, Orlov has been an even or better skater (plus-7 overall).  He has had a bit of a penalty bug hit him, though, with four minor penalties in those eight games.  His scoring might be picking up, though.  He comes into this game with assists in two straight games after going seven games without a point.  Orlov is 0-2-2, minus-3, in seven career games against the Blue Jackets.

This is a trap game of sorts for the Caps.  It is the last game of a road trip, and a bitter rival will be on tap in their return to Verizon Center on Wednesday night in a nationally televised game, the Pittsburgh Penguins.  Columbus is a team that certainly has the capacity to make the Caps pay if their attention wavers.  The game might hinge on a very productive and very efficient Columbus power play and an improving Capitals penalty kill, which is not a sentence we thought we would be typing a few weeks ago.  But if the Caps can take advantage of Columbus goalie Sergei Bobrovsky, who has allowed eight goals on 46 shots over his last two games (.826 save percentage), it could make for a successful end to the road trip.

Posted by The Peerless at 3:21 AM No comments: