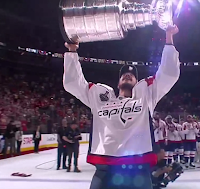 “True happiness... is not attained through self-gratification, but through fidelity to a worthy purpose.”
-- Helen Keller

Jay Beagle had a career year in 2016-2017 – 13 goals, 17 assists, 30 points, a plus-20, 12 even strength goals, four game-winning goals, 100 shots on goal, a 13.0 percent shooting percentage, all career bests.  With the Caps entering the 2017-2018 season with what many viewed as an inferior roster, and with Beagle in the “walk” year of his current contract, there might have been a certain temptation to duplicate his previous year’s numbers to maximize his free agent value, even if doing so caused him to step outside the team structure.

Beagle did not replicate his career year of 2017-2018, but he had a season that did put him in a position to cash in nicely in free agency, should he choose to go that route this summer. His numbers compare favorably to his per-82 game numbers over his eight years preceding his big year last season.  In 79 games he had:

Beagle’s tens were rather consistent.  Only twice in eight segments did he fail to record a goal; only once did he have as many as two.  He had a points range of 2-4 points across seven of the eight segments, only dipping to one point in his seventh segment.  Six times in eight segments he had a single minor penalty.  Once he had two minors, and in the other he went without a trip to the penalty box. 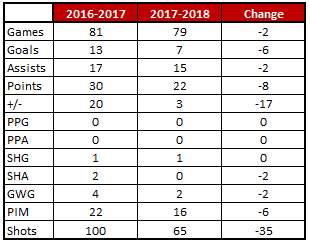 Fearless’ Take… There have been 494 skaters dressing for the Washington Capitals for at least one game over 43 seasons.  Jay Beagle, an undrafted free agent who was signed to his first contract with the Caps at the age of 22 and who did not play in his first NHL game until he was 23, is now in 30th place in franchise history in games played (471).  Only seven players in team history have appeared in more postseason games with the Caps than Beagle (85).  Since he came into the league in 2008-2009 (playing only three games with the Caps that season), only Brooks Laich spent more time killing penalties (1,233:44) than Beagle (889:41) among forwards.  And, although he was a player who battled with injuries earlier in his career, he missed only four games over the past two seasons.  And there is “The Beagle Effect.”  In 47 career regular season games in which Beagle scored a goal, the Caps are 41-1-5.  Washington was 7-0-0 in games featuring a Beagle goal this season, bringing the streak to 17 straight games in which Beagle scored a goal that the Caps won.

Cheerless’ Take…  There were 363 forwards appearing in 50 or more regular season games this season.  Beagle was last among them in shot attempts-for percentage on ice at 5-on-5 (39.04 percent).  Just for good measure, he was last in unblocked shot attempts-for at 5-on-5, too (38.91 percent).  Things might have gone a lot worse for him and for the Caps if the shooting percentage at fives with Beagle on ice was lower than 8.7 percent (tied for 99th among those forwards).

Odd Beagle Fact… Jay Beagle had 17 instances this season in which he took at least 10 faceoffs and had a faceoff winning percentage of 70 percent or better.  That was most in the league (Ryan O’Reilly did it 15 times).

The Caps were playing the Carolina Hurricanes for the third time in ten days.  Having split the first two encounters, the Caps were looking to take the rubber match in the back half of a home and home, back to back set of games.  The teams exchanged the lead three times, the ‘Canes breaking on top on a Jordan Staal power play goal 3:20 into the game, and the Caps tying the game on a power play four minutes later.  The Caps took their first lead of the game just 28 seconds into the second period, but Carolina tied it back up on a Sebastian Aho power play goal in the ninth minute of the period.  Carolina took the lead back less than two minutes into the third period on a Jeff Skinner goal, but Brett Connolly tied it one last time with an unassisted goal off a Carolina giveaway with just 3:08 remaining in regulation.  It appeared the game would go to extra time as the clock ticked under a minute to go.  The Caps had one more rush in them, though…

Jay Beagle stuck with a loose puck, sneaking it under the glove of goalie Cam Ward with just 1.3 seconds left to give the Caps a 4-3 win.

The last meeting of the clubs for the season hardly went as the Caps or Beagle would have scripted it.  A scoreless first period gave way to a Michal Kempny goal early in the second period, but Carolina drew even just 40 seconds later on a Derek Ryan goal.  It just got worse for the Caps from there.  The Hurricanes added a goal later in the second period, and then they added a pair in the third period, the latter of them an empty netter.  Carolina skated off the Capital One Arena ice with a 4-1 win, the Caps’ worst loss on home ice by margin of defeat since they lost a 5-2 decision to the Los Angeles Kings on November 30th.  Beagle skated just 9:10 in ice time, had no shot attempts, no hits, no takeaways.  Only Chandler Stephenson skated as few shifts (13) as Beagle, tied for the fewest Beagle skated in a home game all year.

The 2018 postseason was redemption in the case of Jay Beagle.  In the 2017 playoffs Beagle failed to record a point in 13 games and was a minus-5. He had only six shots on goal in the 13 games, the fewest he had in any postseason since he had one shot on goal in four games in 2009.  This spring, though, Beagle went 2-6-8, his point total equaling his total over 39 playoff games over his previous three seasons.  He was a career-best plus-7, recorded his second postseason game-winning goal (in Game 1 against Tampa Bay in the conference final), and finished fifth among 67 players taking at least 50 faceoffs with a 60.1 winning percentage, a career best.  In the postseason, there were ten instances of a player taking at least ten draws and winning at least 80 percent of them.  Beagle accounted for three of them.  No other player had more than one.  And, Beagle became the first player in the history of the NHL to have a Kelly Cup (ECHL), a Calder Cup (AHL), and a Stanley Cup (NHL) championship on his resume.

Jay Beagle is that player who carved out a solid NHL career on the basis of hard work and a fidelity to playing hockey the “right way.”  His possession numbers might be better, and his role is that of a bottom-six forward, but his work ethic and timeliness in contributing offense in this year’s postseason makes him one of the best at what he does in the role he plays.  If Beagle should leave the club in free agency this summer, he goes out on the highest of notes.  Teams need a “Beagle” to be successful, and his body of work this season and over his career makes him a player to be prized in the market and admired by Caps fans.