The Peerless Prognosticator is ON THE AIR!!! -- Game 65: Maple Leafs at Capitals, March 3rd -- The Stadium Series

The Washington Capitals, stubbornly clinging to their one-point lead in the Metropolitan Division, hope to extend what is, as of Friday morning, the longest winning streak in the Metropolitan Division (one game, with Carolina and the New York Rangers) when they take things outdoors on Saturday night.  The Caps will host the Toronto Maple Leafs at Navy-Marine Corps Stadium in Annapolis in what will be their third outdoor game in franchise history.

The Caps will be looking to make their record 3-0 in the elements, having beaten the Pittsburgh Penguins, 3-1, at Heinz Field in Pittsburgh in the 2011 Winter Classic, and defeated the Chicago Blackhawks, 3-2, at Nationals Park in the 2015 Winter Classic.

Toronto will also try for their third outdoor win in three tries, edging the Detroit Red Wings, 3-2, in a Gimmick in the 2014 Winter Classic at Michigan Stadium in Ann Arbor, Michigan, and topping the Red Wings again, 5-4, in overtime at BMO Field in Toronto in the 2017 Centennial Classic.

Washington is looking to establish some modest momentum after a difficult February in which they went 6-6-2.  Only once in the month did they win consecutive games – Games 53 and 54 on the schedule, a home-and-home sweep of the Columbus Blue Jackets.

In the meantime, that 14-3-2 record over their last 19 games is the best record in the league since January 20th, when it started.  Over that span, it might surprise folks that Auston Matthews is not the team’s leading goal scorer or point producer, but Matthews has missed the last three games and is expected to miss this game and a few more with a second-degree shoulder separation.   In the meantime, the Leaf’s leading goal scorer and point producer over their recent run is Mitch Marner (12-10-22, plus-2).  Marner is something of the forgotten jewel of the 2015 entry draft.  You will remember that was the one with Connor McDavid and Jack Eichel, taken first and second by Edmonton and Buffalo, respectively.  Marner was taken fourth overall in that draft by Toronto, after Arizona selected Dylan Strome.  Nevertheless, Marner is fifth in the 2015 draft class in goals scored (36) and third in points (114), trailing only McDavid (223) and Eichel (166).  Marner has not gone consecutive games without a point in Toronto’s recent 19-game run and is shooting a healthy 20.0 percent over that span (12 goals on 60 shots).  In five career games against the Caps, Marner is 2-3-5, minus-3.

Among the high-scoring forwards such as Matthews, Marner, William Nylander, and Nazem Kadri, defenseman Jake Gardiner gets lost in the glare.  But there he is, one of 13 defensemen this season with 40 or more points, his 40 points leading the Maple Leaf blueliners.  He does it by spreading things around, his 36 assists tied with Los Angeles’ Drew Doughty and Tampa Bay’s Victor Hedman for seventh in the league.  Gardiner might be one of those examples of how difficult it is to develop as an NHL defenseman and how long it takes to find one’s footing at the position.  He showed promise as a contributor in the offensive end, but was something of a risk-taker.  However, he has slowly established himself as a decent possession player (a personal CF% at even strength of 50 percent or better in each of the last four seasons) without sacrificing offensive production.  Last season, Gardiner set career highs in assists (34) and points (43), and this season he topped that assist total already (36) and appears a certainty to set a career high in points (he has 40 in 66 games).  Gardiner had a five-game points streak (0-5-5) snapped in the Leafs’ 3-2 overtime loss to Florida last Tuesday and is 1-3-4, minus-5 in 19 career games against the Caps.

No one has seen as much work between the pipes this season than Frederik Andersen.  He leads the league’s goalies in minutes played (3,237, more than 100 more minutes than Columbus’ Sergei Bobrovsky), and no one comes close to the number of shots on goal he faced (1,846, well clear of the 1,698 shots faced by the Rangers’ Henrik Lundqvist).  He has done what is required, be good enough to give the high-powered offense a chance to do what it does.  His 2.67 goals against average is not spectacular (16th among 33 goalies with 1,500 minutes of ice time), but his save percentage of .922 ranks eighth in that group, just rounding error behind Los Angeles’ Jonathan Quick for seventh place.   His five shutouts is tied for fourth-most in the league, trailing only Andrei Vasilevskiy (seven), Connor Hellebuyck (six), and Pekka Rinne (six). Over the Leafs’ 14-3-2 record of late he has been strong, going 10-3-1, 2.65, .923, with two shutouts.  In four career regular season games against the Capitals, Andersen is 3-0-1, 2.00, .932, with two shutouts. 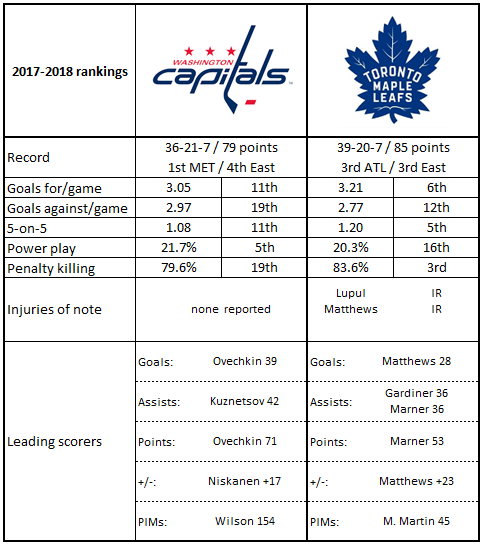 1.  Toronto comes at teams from everywhere, or at least from everyone.  Over their 14-3-2 run, 12 different players have at least 30 shots on goal.  Want some comparison?  The Caps have only 11 players with 30 or more shots on goal in the 2018 portion of the season, covering 24 games.

2.  This strong run of success over their last 19 games is not built on strong possession.  The Leafs rank 22nd in shot attempts-for at 5-on-5 over that span (48.59 percent).

3.  Toronto can be sloppy with the puck, too.  Their 259 giveaways in their 14-3-2 run tops the league, although it is mitigated somewhat by being credited with 158 takeaways, fourth-most in the league over the same span.

5.  Toronto has had the odd occurrence of dressing nine different defensemen over this 14-3-2 run.  Odder still, all of them have at least one point.  Even Justin Holl, who dressed for only two games, yet has two goals, most among the group.

Tyler Bozak is one of those players who seems as though he has been around since the cornerstone was laid in franchise history.  Well, perhaps not for a franchise that has been around as long as Toronto, but he has been a constant and consistent element of Leafs hockey for going on nine seasons.  When he takes the ice on Saturday night, it will be his 579th game in a Toronto jersey, 24th all-time in games played and most with Toronto of any active player in the NHL.  And he has been consistent.  Since 2011-2012, when he became a full-time member of the club, his goal scoring has been tightly clustered, between 15 and 23 goals, except for the abbreviated 2012-2013 season (12 goals in 46 games) and 12 in a 57-game 2015-2016 season shortened by a series of injuries.  This year, his production is off – 10 goals in 65 games – owing to the fact that for the first time in his career, his shooting percentage is under ten percent (8.4), compared to a career 14.2 shooting percentage.  Bozak comes into Saturday’s game 2-3-5, plus-3, in his last seven games.  He is 4-7-11, minus-10, in 24 career games against Washington.

Through 58 games this season, T.J. Oshie is on a pace for his lowest goals per game average of his ten-year career (0.21).  He has gone 14 games without a goal, and you have to go back to November 18th for the last time he scored a goal at even strength, a streak without one that is now at 28 games.  His scoring, sparse as it has been, has matter when it appears.  The Caps have lost only one game in regulation among the nine games this season in which Oshie has goals (6-1-2), and the Caps are unbeaten on home ice (4-0-0) when he does so.  Caps fans will be hoping a correction is coming – soon.  In those 28 games since his last even strength goal, he has just one power play goal on 49 shots, a 2.0 shooting percentage.  When one considers that as a Capital, Oshie is a 16.6 percent shooter, even with this current slump, something has to give. It could happen here.   In 14 career games against Toronto, Oshie is 5-11-16, plus-12.

Home is where the heart is, and hopefully the Caps bring some heart to Navy-Marine Corps Stadium on Saturday night.  It could be a strange game, if the winds that plagued the metropolitan area on Friday do not completely subside by puck drop.  But the conditions will be the same for both teams, and they might work against a team with the offensive flair of the Maple Leafs.  This might be a game more hard-nosed in nature, and one that might provide some drama as Alex Ovechkin closes in on his ninth 40-goal season (he is one short) and 600 goals in his career.  He is but a hat trick away from that mark.  It could be a wild one.

Posted by The Peerless at 7:49 PM No comments: