The Peerless Prognosticator is ON THE AIR!!! -- Game 59: Washington Capitals at Philadelphia Flyers, February 22nd

The Washington Capitals take to the ice on Wednesday night to do something they have not had to do in almost two months and to avoid something that hasn’t happened in more than 11 weeks – break a two game losing streak and avoid having it climb to three.

They will seek to get back on the winning track in one of the most inhospitable venues for visitors in the NHL against a desperate team. Beating the Philadelphia Flyers at Wells Fargo is never easy, but the Caps will be facing a club that has to climb over three teams ahead of it to become playoff-eligible.

The Caps are coming off a pair of one-goal losses since their bye week ended, a 3-2 Gimmick loss to the Detroit Red Wings and a 2-1 loss to the New York Rangers. Those losses mean that by the time you read this (if by “the time,” it is after 11:00 on Tuesday night), the Caps might no longer be the top team in the NHL standings. Washington leads the Eastern Conference by a healthy margin (five points over the Pittsburgh Penguins), but they have a one-point lead over the Minnesota Wild for the top spot in the league rankings. The Wild host the Chicago Blackhawks on Tuesday night and could take over the top spot with a win.

Meanwhile, the Flyers have been doing a long slow bleed out of their season. Back on December 14th they were 19-10-3, carrying a ten-game winning streak, and just two points out of the top spot in the Metropolitan Division and the Eastern Conference standings. Since then, however, Philadelphia is 9-14-4, just one win in regulation on home ice this month (2-2-1 overall), and has sunk to sixth place in the Metropolitan Division and 11th place in the Eastern Conference.

Philadelphia’s problems over the last 27 games come down to two. They can’t score, and they can’t keep their opponent from scoring. Theirs is a whopping goal differential of minus-1.22 goals per game over that stretch on a 1.74 goals-for per game and a 2.96 goals-against per game. The goals-against problem isn’t that they are allowing opponents unfettered access to their net; the Flyers are allowing just 27.7 shots per game in that stretch. Nor is their penalty killing all that bad, going 80.2 percent in that stretch.

Goaltending is another matter. Steve Mason (3.08 GAA/.892 SV), Michal Neuvirth (2.30/.909), and Anthony Stolarz (2.62/.904) have not exactly been a brick wall in front of the Flyer net over the last two months. In fact, neither the Flyers’ regular goaltenders – Mason and Neuvirth – have a save percentage as high as .900 this season (although Mason’s is .89991). Neuvirth appears to be the preferred choice for the moment, since he has had the call in each of the Flyers’ last four games, in three of which he allowed two or fewer goals (there was that six goals on 25 shots stinker against Edmonton last Thursday. The former Capital has two career appearances against his old team with a record of 1-0-0, 2.44, .914.

Twelve players in the NHL have a plus-minus of minus-20 or worse. The Flyers have four of them. Say what you will about plus-minus, but as they say, “that ain’t good.” A trio of forwards are at minus-20: Claude Giroux, Brayden Schenn, and Wayne Simmonds. It is no coincidence, perhaps, that this trio also comprise the only trio of forwards in the league on one team with 20 or more power play points apiece. The Flyers are one of two teams in the league (Dallas is the other) with two players with ten or more power play goals, Schenn (14, leading the league) and Simmonds (12) doing it for Philadelphia.

Schenn, now in his sixth season in Philadelphia after spending his first two in Los Angeles with the Kings, has seen that power play goal total increase over each of his last five seasons from two in 2012-2013 to the career-high 14 he takes into this game. However, his even-strength goal scoring has fallen off a cliff. After hitting double digits in even strength goals in each of the last three seasons (15 last year, one off his career high), he has only four in 56 games so far this season and only one in his last 27 games. He also appears to be one of those players of whom it might be said, the less seen of him, the better. In 22 games this season in which he logged 17:57 or more of ice time, the Flyers are 5-14-3. They are 22-9-3 in his other 34 games. Schenn is 3-5-8, minus-4, in 21 career games against Washington.

Over the last four seasons, including this one, Wayne Simmonds has scored more goals (114) in fewer games (297) than Phil Kessel (109/304) and has more goals overall that Brad Marchand (111) or Jeff Carter (108), testimony to his durability and performance. He is also ornery. In those four seasons he is the only NHL player with at least 100 goals and at least 400 penalty minutes (405). This season, he is on a pace to finish with a career-high 35 goals, although he has some way to go to catch his career high in penalty minutes. He is on a pace for 120 PIMS, and his career high in that area is 147 set last year. Simmonds has goals in four of his last five games and eight of his last 15 contests. He is 5-8-13, minus-4, in 26 career games against the Caps. 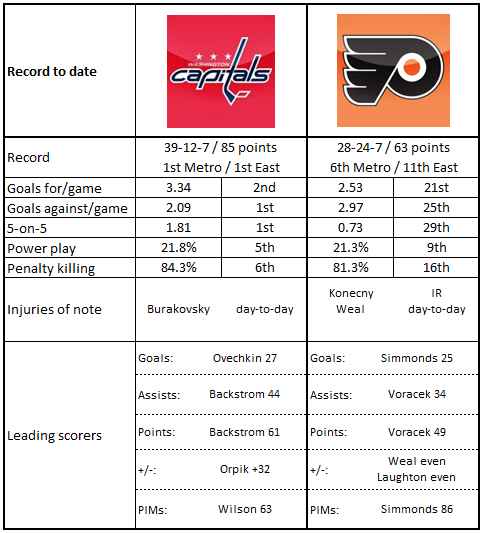 1.  Those 47 goals scored by the Flyers in this 9-14-4 slide that began in mid-December is fewer than any team in the league over that span.

3.  If you are thinking it’s a blowout, take the Caps. The Flyers’ 2-7 record in such games is the worst winning percentage in the league (.143).

4.  The first period could tell the tale. Only Colorado and Vancouver have scored fewer first period goals (30 and 28, respectively) than the Flyers (31), and the Flyers have a minus-18 goal differential in the first period, second-worst in the league (Colorado is minus-31).

5.  One has to think goaltending is really sinking what could be a decent season for the Flyers, if you take the view that possession numbers matter. Philadelphia ranks fifth overall in Corsi-for at 5-on-5 (51.56 percent). Then again, in Corsi-for adjusted for score, zone, and venue, they rank just 19th (49.70 percent; numbers from Corsica.hockey).

1.  Of the Caps’ last ten losses, nine have come by one goal, five in extra time, four of them in the trick shot competition.

2.  Lollygaggers! Eleven of the Caps’ 12 losses in regulation this season have come in games played at or under two hours and thirty minutes. In games taking longer than 2:30, the Caps are 22-1-6. Motto: more faceoffs, longer commercial breaks.

4.  The Caps are the only team in the league to have allowed fewer than 50 total goals in each regulation period this season.

5.  Washington is now third in the league in Corsi-for at 5-on-5, adjusted for score, zone, and venue (53.00 percent; numbers from Corsica.hockey).

Since he came into the league in 2005-2006, Alex Ovechkin has played in Philadelphia 21 times. He has goals in 14 of those games. No player has had more games with a goal in Philadelphia over that span than Ovechkin. He has 17 goals over those 14 games, but in one of those odd little twists, the Caps are just 5-3-6 in those games. But before you think what Ovechkin does doesn’t matter, the Caps are 2-4-1 in the games in which he did not score a goal (odd that in 21 games in which Ovechkin played in Philadelphia in his career to date, the Caps are 7-7-7). What is suggests is that Ovechkin is a necessary, but an insufficient ingredient to success for the Caps in Philly. Other players – the secondary scorers or the support group or whatever you want to call it – matter. Cheerless is in the corner rolling his eyes as if to say, “ok, now tell us something we don’t know.” Ovechkin is 31-18-49, even, in 43 career games against the Flyers.

Caps fans will remember a night back in early November 2013. They stormed into Wells Fargo Center and lit up the Flyers for seven goals in the first 45 minutes of the game. Then something happened. Maybe it was nothing, maybe it was something, but before the game reached its 46th minute, the Flyers (or more precisely, goalie Ray Emery) lost their minds and took 29 minutes in penalties, including Emery’s leaving the crease to pummel Caps goalie Braden Holtby in what amounted to an assault of a bystander as another fight was going on (Tom Wilson and Wayne Simmonds, later to be followed by Alexander Urbom and Brayden Schenn, and then Steve Oleksy and Vincent Lecavalier). Since that fracas, the Caps are 0-3-2 in Philadelphia, including a 3-2 Gimmick loss back on December 21st, and have been outscored in hockey goals by a 19-12 margin in the five games. The last time the Caps had a winless streak longer than five games in Philadelphia, they went 16 games (15 losses and one tie) and almost nine full years (January 1998 – November 2006) without a win up there. It won’t come to that.