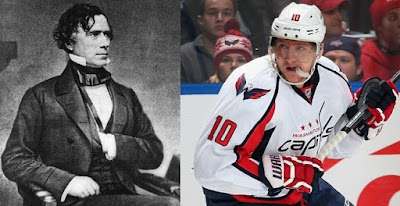 Franklin Pierce was nominated by the Democratic Party to be its candidate for President in the election of 1852.  He was not their first choice.  Or their second.  Or their third, for that matter.  But eventually, he became their nominee, a compromise choice in a badly-splintered convention.  The “compromise” candidate won election later that year, but it soon became evident that the deal the Democrats made was a poor one, even though they won the White House.  And if there is a similar circumstance involving a player coming to Washington in a deal that might have looked promising at the time, only to turn into a disaster, one need look no further for an example than Martin Erat.

About that “compromise.”  We just noted that Pierce was not the first choice of the Democrats at their nominating convention in Baltimore in early June of 1952.  Not only was he not the party’s first choice, he received no votes from the delegates assembled.  Lewis Cass, who was the party’s nominee in 1848, led all those receiving votes (four individuals in all), but he failed to obtain the majority needed for nomination.

On the second ballot, Pierce again failed to receive a vote, and Cass won the balloting once more, but again failing to obtain the majority necessary to win the nomination.  Same on the third ballot.  And the fourth.  And the fifth.

Finally, on the 35th ballot, Pierce was put forward as a compromise candidate, but the delegates were luke-warm in their support.  He received 15 votes, while Cass was back in the lead but not with a majority.  The voting continued.

After 48 ballots, the last of which was won by William L. Marcy, but not with a majority, the delegates finally just said, “ah, f**k it,” and nominated Pierce on the 49th ballot with near unanimity (282 of 296 votes).

Pierce won the general election handily, 254 electoral votes to 42 for Winfield Scott of the Whig Party, but then the 14th President of the United States had to govern.  He started out as both a friend and a foe of political patronage, advocating non-partisan standards for the civil service while trying to please party colleagues interested in the spoils of electoral victory.  Barely a year after his inauguration, he signed the Kansas-Nebraska Act, a bill meant to strike a balance between pro- and anti-slavery interests in the establishment of the Kansas and Nebraska territories, but managed to satisfy neither side.  It led to a shooting war in the territories that lasted into the Civil War, known as “Bleeding Kansas.”

It would not be the end of troubles in the Pierce administration.  He lost control of a good portion of his diplomatic corps, who joined in supporting the Ostend Manifesto, a document advocating the purchase of Cuba from Spain by the United States.  It was a proposal right out of “The Godfather,” an offer Spain couldn’t refuse, since the proposal suggested that failure to agree to terms would result in a declaration of war on Spain to take control of the island.  The proposal was a dud in the United States, costing Pierce a good portion of support in the North, which objected to expansion of slavery into Cuba.  His first term one of turmoil, not only would Pierce fail to win re-election to a second term, the Democrats did not nominate him for President in 1856.  After 19 ballots at the nominating convention, the Democrats selected James Buchanan unanimously as their candidate.

There were some successes under Pierce – the Gadsden Purchase (what would become parts of New Mexico and Arizona), improvements in internal management of government operations – but the fissures created between North and South over the slavery question deepened and widened under Pierce.  A candidate who was thought possible of bringing North and South together became a President who could do no such thing, and today he is regarded among the worst Presidents in American history.

And that brings us to the sad saga of Martin Erat, Washington Capital.  The 2012-2013 season certainly was not an easy one for the Capitals.  The Caps were in upheaval the previous season, having relieved Bruce Boudreau as head coach in favor of former Capital player and captain Dale Hunter, who left the club at season’s end to return to his London Knights in Canadian juniors.  Then, the league missed the first three months of the 2012-2013 season to a labor-management dispute, only to return to an abbreviated schedule without the benefit of a full training camp, a situation putting new head coach Adam Oates in a difficult position.

It was a struggle for the Capitals, who were at .500 (17-17-2) as late as April 2nd.  On April 3rd, looking for something to kick start their home stretch and perhaps add some veteran experience for the postseason, the Caps traded former 11th overall draft pick Filip Forsberg to the Nashville Predators for Martin Erat and prospect forward Michael Latta.  For all of Forsberg’s potential as a high draft pick, then General Manager George McPhee said, “I wanted to help this team now.”  Erat, in his 11th season in the NHL and more than 750 regular and postseason games on his resume, was the player on whom McPhee settled to provide that help.

On paper it looked like a good fit.  With Alex Ovechkin playing right wing under Adam Oates, the left side needed more production.  Erat being a left-handed shot, and Oates having a borderline obsession for players playing on their “handed” side, he was a fit to fill that need.  Erat came to the Caps having scored more than 15 goals in each of his previous eight seasons, averaging 21 per 82 games over that span.

Things started poorly for Erat and the Caps, though.  In his second game he sustained a lower body injury and missed the next three contests.  Upon his return he scored his first goal as a Capital, the game-winner in a 5-1 win over the Toronto Maple Leafs, and he had points in consecutive games.  It did not last.  He went without a point in his last four regular season contests, going 1-2-3 overall while averaging less than 14 minutes in the nine games in which he appeared.

It did not get better for either Erat or the Caps in the 2013 postseason.  After failing to record a point in any of the first three games of the opening round series against the New York Rangers, he injured his left wrist late in the first period of Game 4, a game the Caps lost, 4-3, denying them a chance to take a 3-1 lead in games in the series.  Erat missed the final three games of the series, the Caps losing in seven games to the Rangers.

If his first taste of action in a Capitals uniform was bitter, the second was toxic.  Erat opened the 2013-2014 season with the Caps getting little ice time, logging fewer than ten minutes in each of his first four games.  Not that he gave much of an indication he deserved more.  He went without a point in his first seven games and did not score his first goal until his 50th game of the season.  As if to add insult to injury, that goal was an empty netter in a 3-0 win over the New Jersey Devils.  It would be the last goal he would score for the Caps.

By that time, Erat had already soured on his Washington experience and requested a trade.  Not soon after that goal against the Devils, he renewed the request.  Finally, the disgruntled player and disappointed club parted ways, Erat being traded to the Phoenix Coyotes with AHL prospect John Mitchell for another AHL prospect, Chris Brown, and defenseman Rostislav Klesla.  The defenseman was packaged with goalie Michal Neuvirth shortly thereafter and shipped to Buffalo for goalie Jaroslav Halak, who was viewed as an upgrade to Braden Holtby, who Oates had nearly ruined with his meddling in the goalie’s style and approach.

Franklin Pierce looked like a decent choice on paper to serve as the Nation’s chief executive, but in practice he was a disaster, taking office at a difficult time in American history and making it worse.  It turned out to be a very bad decision made by the Democratic Party to nominate him after a contentious nominating convention that lasted dozens of ballots.  Martin Erat looked like a decent choice to provide experience and punch in a lineup that needed it down the stretch and in the postseason, but he was in and out of the lineup with injuries, became unhappy with the way he was being used, and was a focal point in a situation that was worsening with the Caps.  It turned out to be a very bad decision by team management to bring him on, especially at the cost of a highly-regarded prospect who has gone on to considerable success in Nashville.  It is arguably the worst trade in the McPhee era of the club.

It is not hard to see that Franklin Pierce and Martin Erat share more than just having been short-term residents of Washington, D.C.