The Peerless Prognosticator is ON THE AIR!!! -- Game 12: Panthers at Capitals, February 9th

It’s another Saturday Night Southeast Cage Match!  The Washington Capitals host the Florida Panthers in a key divisional tilt. It is a contest that…

The difference between the teams is that one of them is actually playing decent hockey.  It is not the home team.  The Panthers are 3-0-1 in their last four games, although you might say their competition has been weak. They split two decisions with 11th place Winnipeg, a 6-3 win and a 3-2 overtime loss. Their other two wins came at the expense of 14th place Buffalo, in a 4-3 decision, and in a Gimmick over 13th place Philadelphia, 3-2.

Still, in posting that 3-0-1 record in their last four games, the Panthers have shown a competence the Caps have not.  For one thing, they have been able to score – 14 goals over those four games, including twice posting more than four goals, something the Caps have yet to do this season.  And at the other end, they killed off 10 of 12 penalties in those four games.  An 83.3 percent penalty kill rate is not what one might regard as excellent, but it certainly beats the 8-for-13 (61.5 percent) posted by the Caps over their last four games. 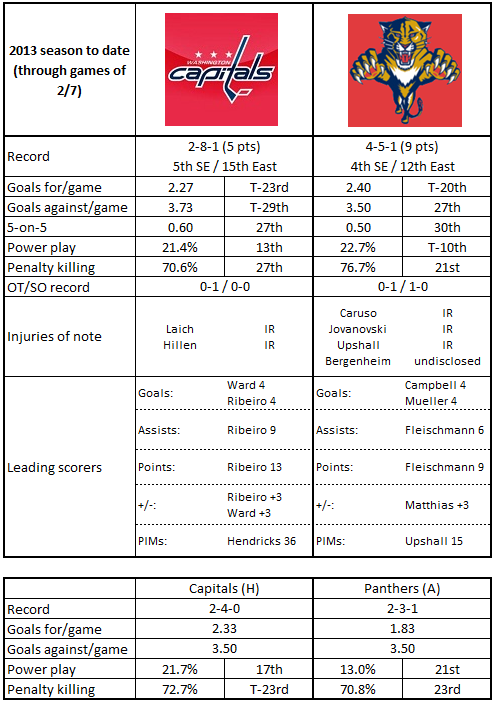 3.  One ingredient of the Panthers’ recent success – shots allowed.  In their last four games Panther goaltenders have faced only 23.6 shots per 60 minutes.

4.  Only one team has been involved in more three-goal decisions than the Panthers so far this season.  In ten games played, Florida is 2-4 in such games, although each of their last three games were one-goal decisions.

5.  Last season, Florida earned 32 of their 94 standings points in games going to extra time, a 7-18 record in such games.  So far this season they have earned three of their nine points in that fashion (1-1).

1.  Comparing the Caps to the Panthers over their last four games, the Caps are 1-3-0.  They are 4-for-14 on the power play, but only 8-for-13 on the penalty kill.  They have been outscored by that 8-4 margin on special teams, and have been outscored 8-6 at even strength.

2.  When you score only ten goals in four games, as the Caps have done, balance is not quite the virtue it is as when you score 16, as Florida has over their last four.  Eight different Caps have those ten goals, three of them by Mike Ribeiro and seven other Caps with one apiece.

3.  Mike Ribeiro leads the Caps in goals and points over the last four games (3-2-5), with Alex Ovechkin and Nicklas Backstrom right behind (both with 1-3-4 marks).  Hey, all of them are at or better than a point a game in these four games, what gives?  Well, for one thing, the rest of the point scoring is evenly distributed among forwards and defensemen (six points for each group), but only three forwards not already mentioned in this paragraph have points (Troy Brouwer, Wojtek Wolski, and Marcus Johansson),  It’s that old secondary scoring thing again.

That the Panthers are 3-0-1 in their last four games is not a product of goaltending.  Jose Theodore might be 3-0-0 over Florida’s last four contests, but Theodore has a goals-against average of 2.60 and a save percentage of .897.  Those are Vezina Trophy numbers compared to what the Caps are doing these days, but Theodore hasn’t really stolen any of the wins. He has faced only 25 shots per 60 minutes in his streak.  His career record against the Caps is not much better, a 2.58 GAA and .902 save percentage to go along with a 7-10-1 record in 20 career appearances.

Through 11 games Jason Chimera is fifth on the team in shots on goal (23) and has nothing to show for it.  This is the longest he has gone to start a season without a goal since he went 15 games without one to start the 2006-2007 season.  One could say that the Caps are not getting enough goal scoring from Alex Ovechkin and Nicklas Backstrom (five goals between them), but the Caps are not getting enough scoring from anywhere these days (save for Mike Ribeiro).  Getting some support from underneath would be helpful.

2.  Don't be “Lame” in the Middle Frame.  The Caps have those six second period goals.  They also have allowed 19.  That minus-13 goal differential accounts for almost the entire goal-differential (minus-15) the Caps have compiled in regulation through 11 games.

3.  Be the Puck.  The Caps skaters have had their defensive lapses, to be sure, but on the other hand Washington goaltenders have had to face only 26.5 shots per game, too.  That is hardly a heavy volume (over the full season to date it would rank as sixth fewest).  The goalies simply have to start stopping more pucks, especially at even strength.  The old proverb goes that a goalie needs to be a team’s best penalty killer, but the even strength save percentage over the last four games of .866 is abominable.

In the end, here we are.  Two games against a very beatable opponent, and a divisional opponent at that.  But do not take the Panthers lightly; they are playing effectively, if their defense and goaltending is a bit leaky.  The Caps are five points out of a playoff spot, but the eighth place team – the Carolina Hurricanes – have two games in hand on the Caps.  If they don’t get two points tonight – four points in the next four days at the expense of the Panthers in this home-and-home set – well…

Posted by The Peerless at 7:45 AM No comments: