“Expectation is the root of all heartache.”
-- William Shakespeare

When Joey Crabb was signed by the Washington Capitals to a one-year, one-way contract paying him $950,000 on July 1st, optimism was the order of the day.  His agent, Kevin Epp, noted that “he’s versatile and can move up and down the lineup — wherever he’s needed.”  He was confident that Crabb landed in the right place, saying that “Washington was a good fit.  For Joey to have the opportunity to play on a championship-caliber team, that’s what was most important for him, and this was a good chance to do so.”

And why shouldn’t the Crabb camp paint a picture of optimism?  In his first full season in the NHL, with the Toronto Maple Leafs in 2011-2012, Crabb was 11-15-26 in 67 games skating just over 13 minutes a game.  Surely on a team with the offensive features to be brought to bear by new head coach Adam Oates, a player like Crabb could build on that season and flourish in Washington.

It was probably an ominous sign when Crabb did not dress for the season opener against Tampa Bay on January 19th.  He got into the lineup the following game against Winnipeg, then scored his first goal of the season in the next game against Montreal.  But even that had a cloud hanging over it, the goal being the lone goal for the Caps, scored with less than three minutes left in what would be a 4-1 loss.  He then went without a point over his next 21 games.  His ice time, which averaged over 11 minutes per game over his first 12 games with the Caps, dwindled to an average of less than eight minutes a game over his next 14 games.

By the time Crabb skated his last shift for the Caps early in the third period of a 5-3 win over Buffalo on March 14th, he had two goals and no assists in 26 games.  One of the more shocking numbers in his 2013 season resume was the fact that he was on ice for five power play goals against.  Only four other Capital forwards were on ice for more, and three of them – Nicklas Backstrom, Matt Hendricks, and Jay Beagle – did so playing in all 48 games.  The other – Troy Brouwer – played in 47 contests.  Seven Capitals averaged more penalty killing time per game than did Crabb.

Another shocking number, which might not be altogether shocking given his season, is “four.”  That is the total number of goals he was on ice for in 26 games, and two of those were his own.

Crabb was waived in late March, cleared waivers, then was sent down to Hershey for the remainder of his season.  He was 6-6-12, plus-5 in 12 regular season games with the Bears, then went 5-0-5 in five playoff games in the Bears’ first round loss to the Providence Bruins.  He was recalled after the Bears’ season ended but saw no action in the playoff series against the New York Rangers. 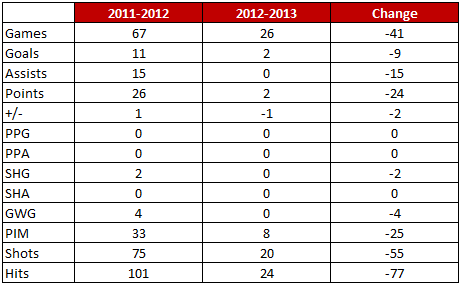 Game to Remember… March 14th at Carolina.  In a season as forgettable as Crabb’s you might think that there would be no game to remember.  But there the Caps were, heading to Carolina on a three-game losing streak and in danger of tumbling into last place in the Eastern Conference.  It got worse when the Carolina Hurricanes, ten points ahead of the Caps in the standings at the time, broke on top with a pair of first period goals, one of them by former Cap Alexander Semin.  However, in the sixth minute of the second period, Crabb went to the basics.  As Aaron Volpatti was chipping the puck along the left wing wall past Hurricane defenseman Justin Faulk, Crabb darted to the net.  Volpatti retrieved the puck and sent a pass to the front of the Carolina net where Crabb had beaten defenseman Bobby Sanguinetti to the spot. Crabb redirected the puck in, starting a comeback that resulted in a Caps 3-2 win.  You could argue that it was the most important goal of the Caps’ season, for with that goal and the comeback win that followed, the three-game losing streak was over, and the Caps finished the season 17-4-2, Southeast Division champs one last time.

Game to Forget… pretty much the rest of them.

In 2012-2013 Chimera would not match that five-game goal total, let alone come close to his career high or even his career average (15 goals per 82 games).  No, three goals would be all Chimera would record for the 2012-2013 season, the first of them not coming until Game 28 against Buffalo.  His others came against similar also-rans in the standings – Tampa Bay and Winnipeg.  Among 373 qualifying players, Chimera finished 358th of 373 players in shooting percentage.  Only six forwards finished lower than Chimera’s 3.3 percent shooting on 92 shots.

What made his shooting statistics even more bizarre is that starting with that first goal of the season against Buffalo in Game 28, he shot to a respectable 9.7 percent over his last 19 games.  After all, he shot 9.8 percent in 2011-2012 when he recorded that 20-goal season.  But his shooting dried up – 31 shots in those last 19 games.

He was also tough on his linemates with that sort of offensive production.  He spent most of his 5-on-5 ice time skating with Joel Ward and Mathieu Perreault, both of whom did significantly better in terms of team goals scored for per 20 minutes (GF20 in stats.hockeyanalysis.com parlance).  Ward’s production value was 0.747 when skating with Chimera, 1.152 when apart.  For Perreault, it was 0.835 with Chimera, 1.276 when apart.

If he is not scoring, was he contributing in other ways?  Well, among Caps forwards only four were on ice for more even strength goals, and those were the big offensive guns –Nicklas Backstrom, Alex Ovechkin, Troy Brouwer, and Mike Ribeiro.  Neither was he a penalty-killer, what with only Ovechkin, Perreault, and Wojtek Wolski getting less penalty-killing ice time per game (20 games minimum).  In fact, Chimera spent less time on special teams (21 seconds per game) than any Capital forward (20 games minimum). 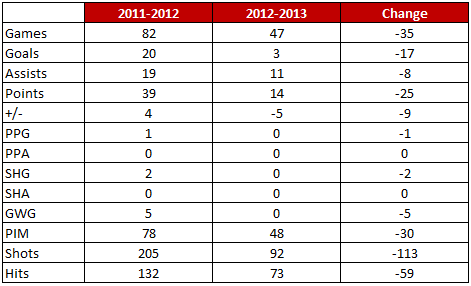 Game to remember… April 23rd vs. Winnipeg.  On a night when the Caps would clinch their last Southeast Division title, Chimera had his second two-point game of the season.  The first came on a nice bit of work between Chimera and Mathieu Perreault.  Mike Green dumped the puck in the Jet’s end, and Perreault beat defenseman Ron Hainsey to the puck, poking it into the corner to the waiting Chimera.  From the corner, Chimera returned the puck to Perreault below the goal line, then made a beeline for the Winnipeg net.  Perreault found Chimera at the side of the cage to the right of goalie Ondrej Pavelec.  Chimera got two whacks at the puck, the first stopped by Pavelec’ pad, but the second one finding the back of the net.  Chimera added an assist on what would be the game-winning goal by Perreault, giving him a two-point night and the Caps another division crown.

Game to Forget… February 12th at Florida.  Start the game as the left wing on the top line but skate a total of ten shifts, three of which end in goals for the opposition – their first three goals of the game, you do not so much as attempt a shot, and you get only one shift after the second period in what would be an overtime game in which you skate a total of 5:43 in ice time, yeah, that would be a game to forget.

Post-Season… The shots did not come early for Chimera in the first-round season against the New York Rangers, only five over Games 1-4, but he was productive – 1-2-3, plus-2 in those games.  But then, just like the rest of the club, he vanished in Games 5-7.  He did not record a point, despite ten shots on goal over those three games.  It probably says enough about the Caps that Chimera finished tied for third in total points for the Caps and was tied for the lead in goals scored with eight teammates, all with one apiece.

Jason Chimera came into this season almost certainly not as productive a player as his 2011-2012 numbers might suggest, but now we are left to wonder if he is as unproductive as his 2012-2013 numbers look. That is an important question to consider for the 2013-2014 season, the last for Chimera under his current contract ($1.75 million salary cap hit).  The easy answer is that he is somewhere in-between the last two seasons.  But if he is closer to his three-goal total for this year than his 20-goal total in 2012-2013, it will be a lot of money to sink into a player who could end up a fourth-liner on most nights, especially one who is not called upon to participate on special teams.  The Caps would probably like to have him provide the stable, regular 15-goal or so production per 82 games that he posted over his first 11 seasons.  But at the age of 34, is that a reasonable expectation?

Posted by The Peerless at 7:29 AM No comments: