For the first and only time in the regular season, the Washington Capitals will play a home-and-home set of games against an opponent.  It might be fitting that the opponent for these two games will be the Carolina Hurricanes, against whom the Caps have played 86 home and 86 road games since the teams first met, Carolina in their previous incarnation as the Hartford Whalers, back in 1979 (in keeping with the balanced history of these teams, that first game ended in a 3-3 tie).

When the Caps beat the Philadelphia Flyers on Sunday, it brought the Caps even over their last seven games (3-3-1) and allowed them to retain their lead in the Metropolitan Division, albeit by the thinnest of margins, a single point ahead of the New York Islanders.

Meanwhile, the Carolina Hurricanes are one of the best teams in the league at the moment.  The ‘Canes last lost consecutive games in regulation in mid-January, and since dropping a 4-1 decision to the Ottawa Senators for a second straight loss on January 18th, Carolina is 20-6-2.  That is the third-best record in the league over that span, trailing only the St. Louis Blues (20-6-3) and the Tampa Bay Lightning (22-4-2).

It might be coincidental, but the Hurricanes’ good fortune with this 28-game run seems to coincide with the acquisition of forward Nino Niederreiter from the Minnesota Wild for Victor Rask on January 17th. Over the 20-6-2 run, Niederreiter leads the team in goals (12) and is third in points (24).  He is tied with Justin Williams for the team lead in power play goals over that span (three), and his six power play points ranks third.  He has even shown a talent for pilferage, ranking second to Sebastien Aho among forwards in takeaways over those 28 games (22).

Niederreiter might have found a home in Carolina.  A former fifth-overall draft pick of the New York Islanders (2010), he played in only 64 games for the Isles over two seasons and managed only two goals and three points.  He was traded to the Minnesota Wild in June 2013 for forward Cal Clutterbuck and a 2013 third round draft pick.  In five-plus seasons with the Wild, he was a durable player (three games missed) and a productive one (110 goals and 228 points in 434 games), but ultimately, he was an expendable one who made his way to Carolina in that January trade with the Hurricanes.  Niederreiter already holds a place in NHL history as the all-time leading goal scorer among players born in Switzerland (124).  In 13 career games against the Caps, he is 5-2-7, minus-1.

Another player from somewhere else who might have found a home in Carolina is forward Teuvo Teravainen.  He leads the team in points over the 20-6-2 run (32) and in power play points (nine).  Teravainen is another first-round pick of another team, having been drafted 18th overall by the Chicago Blackhawks in the 2012 entry draft.  Caps fans might remember that Washington passed over Teravainen to take Tom Wilson with the 16th overall pick in that draft.  He spent parts of three seasons with the Blackhawks and never seem to find a fit. In 117 games with Chicago, he managed only 17 goals and 44 points in 115 games, somewhat disappointing given his widely thought of skill level.  He was traded to Carolina in June 2016 with Bryan Bickell for a 2016 second-round draft pick and a 2017 third-round pick.

Teravainen has found the Hurricanes more to his liking, posting a career-high 15 goals and 42 points in his first season in Carolina, and then besting both last season (23 goals, 64 points).  He is on a pace to challenge for another career high in goals (he has 19), and he already has new career highs in assists (51) and points (70).  Teravainen is 4-8-12, plus-2, in 12 career games against Washington.

It would appear that after six seasons toiling largely as a backup in Detroit and a brief, unimpressive stint with the Philadelphia Flyers to end last season, goalie Petr Mrazek has (yes, him too) found a home, or at least an accommodating environment in Carolina.  Currently in the walk year of his contract, a one-year/$1.5 million deal with the Hurricanes, Mrazek might be in the best stretch of his career.  In the Hurricanes’ 28-game run, he has had 15 starts and has posted a record of 11-3-1, 2.07, .927, with three shutouts.  He has not allowed more than three goals in any of his last 11 appearances, going 9-2-0, 1.63, and those three shutouts. 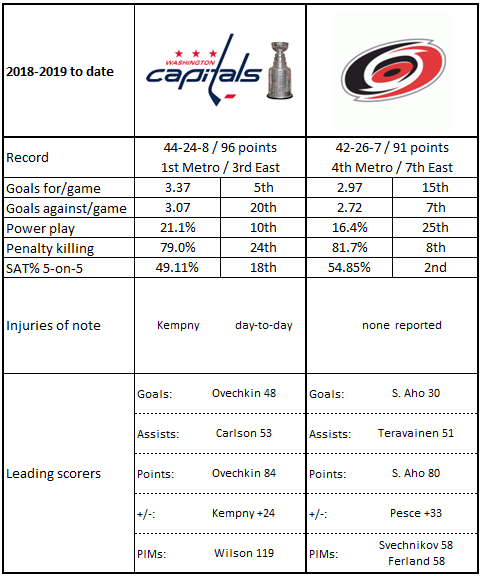 5.  One area where Carolina has been consistent between home and road is shot attempts.  Their shot attempts-for at 5-on-5 is 55.06 percent on the road in their 28-game run, best in the league.  At home over the same stretch, the Hurricanes are 53.50 percent, 11th.

1.  The Caps did some fine-tuning at the trading deadline with the acquisitions of defenseman Nick Jennsen and forward Carl Hagelin.  Since the deadline, the Cap shave been almost equally successful at home (9-2-2/20 points/third in the league) as on the road (8-5-0/16 points/tied for seventh).

It might seem like only yesterday that Justin Faulk was a 19-year old rookie battling against the Caps in the Southeast Division in 2011-2012 and finishing seventh in the Calder Trophy voting for top rookie that season, but now he is an eight-year NHL veteran, all of it with Carolina, and he is climbing the rankings of all-time franchise defensemen.   Only two defensemen in team history have dressed for more games than Faulk (552): Glen Wesley (913) and Adam Burt (626).  He is the all-time leader among defensemen in goals scored (82), by a large margin over second-place Wesley (51).  His 254 points is tops among defensemen to play for the franchise, as are his 38 power play goals and 17 game-winners.

The blemish on his record as a Hurricane is that he is a minus-100, the worst plus-minus ranking among any skater in team history.  In that context, this is one of, if not his best season of his career.  His scoring is a bit down, his 8-23-31 line to date matching precisely his scoring line of last season, and he does not carry quite the load of ice time he did with weaker teams (a second straight season of 22 minutes per game after five straight seasons averaging more than 23 minutes per game).  But he is a plus-9 this season, the best of his career, after going minus-85 over the previous four seasons.  Faulk has not gone consecutive games without a point in more than a month, and since the last time he did, he is 3-8-11, plus-5, in 17 games.  He is 4-8-12, minus-3, in 30 career games against the Caps.

At this stage of his career, and especially with the Caps, there are no numbers that are likely to impress the faithful with respect to Brooks Orpik.  He is not much of an offensive player (and never has been), and his underlying numbers (shot attempt-for percentage at 5-on-5, ratio of takeaways to giveaways) are not impressive.  However, much as it pains the empirical crowd, there is another element that cannot be entirely discounted.  The Caps added a defenseman at the trading deadline (Nick Jensen), they have lost one to injury, perhaps until the postseason (Michal Kempny), and to others have had intermittent struggles this season (the Matt Niskanen/Dmitry Orlov pair).  John Carlson has had another strong season, especially in the offensive end, but there is something to be said for a veteran defensive defenseman who seems to have an ability to manage a locker room.

And it is not as if he has been entirely silent in the offensive end, at least by his standards.  He has two goals, his first two since he posted his career high of three in 2015-2016 with the Caps.  He has eight points in 47 games, almost matching the total he had in 81 games last season.  He is a plus-3, an improvement on the minus-9 he had last season.  However, he does seem to be in a bit of a difficult stretch.  He does not have a point in his last nine games and is plus-1.  Orpik is 1-11-12, plus-6, in 48 career games against Carolina.

These games come at an interesting time for both teams.  If the Caps sweep them, it gets the Caps to 100 points, and it would put them in a decent position to cement their divisional lead.  If Carolina sweeps, it would all but clinch a postseason spot, even if Columbus keeps winning.  A split, and things remain murky for both teams as they head into the last days of the regular season.  Much of the season in Washington has been the carryover of a celebration of the Stanley Cup champion, while in Carolina it has been marked by “surges,” both in performance on the ice and in post-game antics.  Leave the choreography for the game against the Flyers on Saturday, 'Canes fans.