The Peerless Prognosticator is ON THE AIR!!! -- Game 65: Capitals at Bruins, March 5th

The Washington Capitals, having wrapped up their three-game home stand by dropping a 3-2 decision to the New York Rangers on Friday night, head to Boston to take on the Bruins on Saturday evening.

The Bruins are making what looks like a late-season push to solidify their standing as a postseason qualifier.  Boston comes into this game with four wins in their last five games and is just two points shy of the Tampa Bay Lightning and Florida Panthers for the lead in the Atlantic Division.

The Bruins have outscored their opponents by a 16-9 margin over their last five games, the scoring led by Patrice Bergeron (3-3-6).  It is part of a longer run of scoring on Bergeron’s part; he is 6-5-11, plus-5, in his last ten games and has not had consecutive games without a point in that span.  Bergeron remains one of the premier faceoff men in the game.  He has gone ten straight games with a winning percentage of 50 percent of better, andhe hasn’t gone consecutive games under 50 percent since late November.  Among players taking at least 500 draws, Bergeron ranks ninth in the league in overall winning percentage (56.9 percent).

Conspicuous by his absence in Bruin scoring over the last five games is defenseman Zdeno Chara.  At 38 years of age, the big guy is clearly slowing down, even if he does remain a formidable force in his own end.  On offense, though, he is without a point in his last six games, and he has just a pair of assists in his last ten games.  Chara is 7-19-26, plus-9, in 62 career games against the Caps. 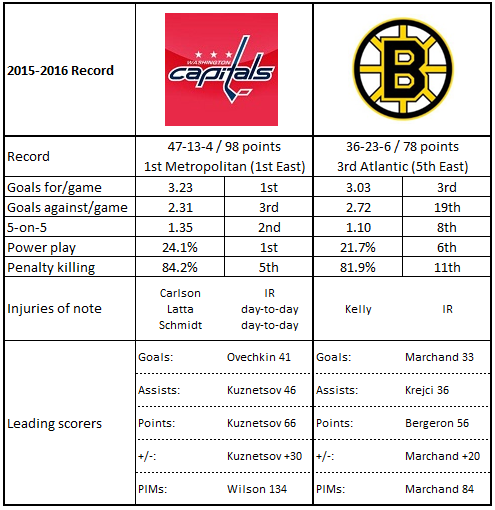 2.  Three goals for seems like a threshold of success for the Bruins (it might be for most teams).  They have only three wins in regulation this season in 26 games when scoring two or fewer goals (6-17-3 overall).  They are 30-3-1 when allowing two or fewer games, so from the Boston point ofview, it might be “first to ‘three’ wins.”

3.  The Bruins have a knack for taking a lead.  They scored the game’s first goal in 40 of their 65 games so far this season. They don’t have such a knack for holding those leads.  Their 28-11-1 record, while certainly a fine one in those instances, is the 17th-ranked winning percentage (.700).

5.  The Bruins are one of those teams whose 5-on-5 numbers are inconsistent.  They have a Corsi-for percentage at 5-on-5 overall of just 48.5, 19th in the league.  However, their 5-on-5 goal differential of plus-12 ranks sixth (numbers from war-on-ice.com).

5.  Two of the Caps’ three highest Corsi-for results at 5-on-5 in a game this season have come at the expense of the Rangers.  On November 3rd they were 65.3 percent to the good, and last night they were 63.5 percent.  They lost both games, 3-2 last night and 5-2 in November (numbers from war-on-ice.com).

Folks know the names Zdeno Chara, Brad Marchand, David Krejci, and Patrice Bergeron.  Ryan Spooner might not be as well known to Caps fans.  However, Spooner is second on the club in assists (32) and fifth in overall scoring (44 points).  In this, his first full season with the Bruins, his 12 goals is far clear of his career high of eight set last season, and his 44 points is more than his career total coming into this season (29).  He has been something of a power play specialist for the Bruins, ranking second on the team with 16 power play points, six of them being goals.  In five career games against the Caps, Spooner is 0-1-1, minus-3.

The Caps are a “coin-flip” team at the moment, 3-3-0 in their last six games, each game settled by one goal.  In fact, the last nine games for the Caps have been settled by one goal.  This is not the dominating team of its first 50 or so games.  Perhaps it is a product of it being in that dry patch of games in late winter when teams are either fighting for a playoff spot or fighting through the routine of 60 or more games that can cause focus to wander and intensity to wane.  The Caps, as perhaps one of the latter sort of teams, get a chance to refocus by taking their act to the road for four games, beginning with this game in Boston.  “Road trip” might be just the tonic for a team such as the Caps.

Posted by The Peerless at 8:13 AM No comments: