Week 4 of the season for the Washington Capitals was about as good as it gets.  A perfect record, balanced scoring, solid defense and goaltending (for the most part; we’ll get to that). But it was necessary, given how hot the New York Rangers and Pittsburgh Penguins remain.  At week’s end the Caps, Rangers, and Penguins were clearly the class of the Metropolitan Division.  Here is how it unfolded. 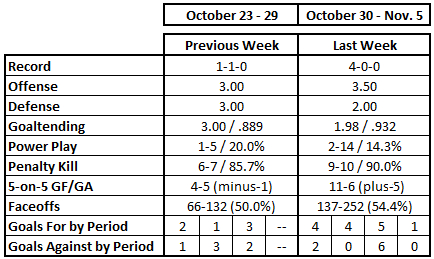 Winning four games in a week is no mean feat.  Last season, on their way to a 56-win season, the Caps had seven four-game weeks (one was a five-game week) and swept the week just once (Week 7 of the 2015-2016 season).  The sweep of the week extended the Caps’ winning streak to five games, something they did do with some frequency last season, posting winning streaks of five or more games five times.  The 8-2-1 record with which the Caps finished Week 4 resulted in one of the odd consistencies of this team.  Over their last 106 regular season games dating back to Game 70 of the 2014-2015 season, the Caps have a record of 73-23-10.  That works out to a per-82 game record of 56-18-8, precisely the record they posted in 2015-2016.  Sustaining that level of production over more than 100 regular season games is nothing short of amazing.

The Caps got goal scoring form top-six forwards (or at least top-six-ish in Marcus Johansson), they got goal scoring from that “secondary” group.  They got balance in points recorded, getting points from 15 different skaters, 11 forwards and four defensemen.  Alex Ovechkin, Marcus Johansson, and T.J. Oshie led the Caps with three goals apiece.  Although he was held without a goal in the last two games of the week, Johansson still has five goals in his last five games, and six in his last eight games.  He is shooting more.  After posting four shots on goal in his first three games of the season without potting a goal, he has six goals on 19 shots in eight games.  Of 213 players with at least 20 shots on goal so far, Johansson is fifth in shooting percentage (26.1 percent).  With Oshie and Ovechkin getting three goals apiece, the Caps now have three players with more than five goals this season.  No team has more (the Rangers and Penguins also have three).

Nicklas Backstrom and John Carlson led the Caps in assists with four apiece.  For Carlson, the helpers that began with an assist in the first game against the Winnipeg Jets this week broke a six-game streak without a point.  Backstrom’s three assists lifted him into the top ten in helpers for the season (tied for ninth with eight assists).

The Caps, for the most part, continued to limit opponents’ opportunities by suppressing shots on goal.  Washington held Calgary and Florida to fewer than 25 shots, making it five times in 11 games the opponents failed to hit the 25-shot threshold against the Caps.  Washington is tied for third in games allowing 25 or fewer shots (five).  Only Los Angeles and San Jose, with seven apiece, have done it more often.

There was a certain symmetry in offense and defense in Week 4.  Just as there were 15 skaters recording points on offense, so were there 15 skaters on ice for goals against. The only skaters spared were Brett Connolly, Andre Burakovsky, Zach Sanford, and Daniel Winnik.

One gets the feeling that the Caps are this close to breaking out on the man advantage.  Week 4 was not that week to do it, though.  Getting 14 opportunities was a good thing, the most they had for a single week since they had 17 in Week 20 last season.  But with two goals scored on those opportunities, the Caps have yet to score more than two power play goals in a week.  Only seven teams have fewer than the five power play goals the Caps have so far.

But the reason one might think they are close to breaking out.  The Caps managed 29 power play shots on goal in 23:07 of man advantage ice time.  Alex Ovechkin had ten of those shots, scoring one of the goals (in overtime in the second of the games against Winnipeg).  That the Caps shot 2-for-29 (6.9 percent) is something unusual to say the least.  But what the Caps did not get much of on the power play in Week 4 was shots from the middle.  T.J. Oshie had just two shots in four games, suggesting that teams are forcing the Caps to work the puck around the perimeter.  If the Caps can adjust, that 6.9 percent shooting percentage could improve. 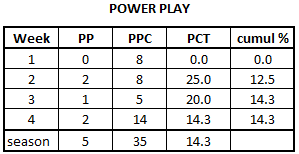 It was almost a perfect week – the Caps allowed the Florida Panthers a power play goal in the last game of the week – but nine out of ten shorthanded situations killed is still a good week. After going just 13–for-18 killing penalties in their first six games (72.2 percent), the Caps are now 12-for-13 in their last five games (92.3 percent).  The Caps did a fairly good job of limiting shots on goal, holding opponents to 15 power play shots on goal in 16:04 of ice time.  And it isn’t the easiest thing in the world to go a perfect 10-for-10 killing power plays.  Last season he Caps had three perfect weeks, but all of them were accomplished facing fewer than ten opponent power plays.

It was a pretty good week in the circle for the Caps.  They lost the overall battle to the Calgary Flames in the first game of the week (46.7 percent) but won the last three games, finishing over 55 percent in all of them.  The Caps were consistent across the zones as well, winning in the offensive end (55.2 percent), the defensive end (53.3 percent), and in the neutral zone (54.4 percent).  Six players took at least ten draws for the week, and five of them finished over 50 percent.  Justin Williams led the quintet with 10-for-14 (71.4 percent) with T.J. Oshie (69.2 percent), Jay Beagle (58.8 percent), Nicklas Backstrom (54.8 percent), and Lars Eller (54.0 percent) doing the honors. Evgeny Kuznetsov was the only Caps taking more than ten draws (26-for-60) and winning less than 50 percent of them (43.3 percent).  The odd part of that is that Kuznetsov’s overall winning percentage for the season improved to 41.9 percent, but he is still 90th of 98 players taking at least 100 draws in winning percentage.

Balance was the key for the Caps as far as goals by period was concerned, at least on offense.  Splitting 13 goals almost evenly across the three regulation periods and adding an overtime goal saw to that.  The problem, though, was a new one.  Over the first three weeks, allowing second period goals was the problem.  In Week 4, though, the Caps shut out opponents in four straight games in the middle period.  The third period was the problem, allowing six goals overall, five of them to the Winnipeg Jets who came from two goals down and three goals down in the third period of their two games to tie the Caps before falling on a late Jay Beagle goal in one contest and an overtime goal by Alex Ovechkin in the other.  The Caps still rank tied for fifth in fewest third period goals allowed (nine), but they did slip this week.  The perfect second period left the Caps tied for eighth in fewest second period goals allowed.  They are the only team to allow fewer than ten goal in all three regulation periods so far. 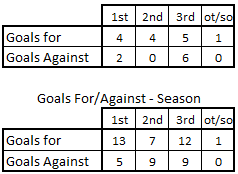 Sure, giving up multi-goal leads in the third period twice is a fate to be avoided.  Yes, the power play has yet to really break through.  OK, the possession numbers might have been better.  But four wins is four wins.  Guys from whom much is expected (Alex Ovechkin: 3-3-6, plus-1; Nicklas Backstrom: 1-4-5, plus-1; T.J.Oshie: 3-0-3, plsu-3) did as expected.  There was the secondary production (Jay Beagle: 1-2-3, plus-2; Marcus Johansson: 3-1-4, plus-1; John Carlson: 0-4-4, plus-3; Evgeny Kuznetsov: 0-2-2, plus-1; Andre Burakovsky: 0-2-2, plus-2).  And there was the unexpected (Karl Azner, Brooks Orpik, and Nate Schmidt (2) chipping in assists).  The Caps continue to be stingy in allowing shots (even if getting out-shot in a game for the first time this season, 45-27, in the first game against Winnipeg). They continue to get solid goaltending.  It is a team that is getting into a groove.  Maybe not quite there, yet, but it is a formidable team for any team to face at the moment.

Posted by The Peerless at 7:35 PM No comments: