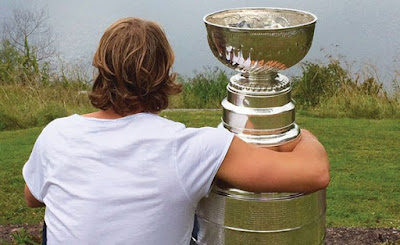 We end the look ahead to the Washington Capitals’ 2016-2017 season with “Five Bold…Perhaps Deranged Predictions,” guaranteed to make you think, or perhaps just annoy you.  Let’s get right to the big one…

1.  Alex Ovechkin will not only not record 50 goals this season, but we have seen his last 50 goal season.

This is not to say Ovechkin will slide down among the also-rans in the league goal-scoring rankings, nor does it mean that Ovechkin has necessarily won his last Maurice “Rocket” Richard Trophy as the league’s top goal-scorer.  We think he will, in fact, win the Richard Trophy this season (keep in mind, he is the only player over the last three years to finish with 50 goals in a season, which he did in each year).  However, time takes its toll on every player, sooner or later, and the first indications of time’s march on Ovechkin will be seen this season.

2.  The Capitals will have two finalists for individual awards this season who have not been one in their careers to date.

It says here that John Carlson will be a finalist for the Norris Trophy as the league’s top defenseman, and that Evgeny Kuznetsov will be a finalist for the Hart Trophy.  Carlson is the easier case to make.  This might be the season in which a defenseman can thread the needle between P.K. Subban and Shea Weber, players traded for one another playing in new cities this season, to grab a finalist nod.  Last year’s finalists – Erik Karlsson, Drew Doughty, and Brent Burns – certainly will be in the mix.  Others might include Philadelphia’s Shayne Gostisbehere, Nashville’s Roman Josi, Dallas’ John Klingberg, and Pittsburgh’s Kris Letang.  However, Carlson has displayed very consistent improvement in his per-game scoring on a year-to-year basis, and despite missing 26 games last season averaged a career best 0.70 points per game.  Health, and the opportunity to hone his game in the World Cup, could give him a head start of taking the next step to elite defenseman status.

Kuznetsov is the harder case, or at least not an obvious one, especially playing a position (center) crowded with players such as Sidney Crosby, Evgeni Malkin, and John Tavares, who could challenge to be a Hart finalist, not to mention the likes of Patrick Kane or Jamie Benn.  The argument for Kuznetsov is admittedly speculative, but this is a player who more than doubled his point total last year over his first full season preceding it (from 37 points to 77).  He led the Caps in assists (57) and total points (77) last season.  The wild card is whether and how much he can improve on the 20 goals he recorded last season.  If that number is 25-30, and he improves on his fourth-place finish in assists, he could sneak into the discussion of Hart finalists.

3.  The Capitals will repeat as Presidents Trophy winner.

4.  The Capital prospect most likely to make an impact this season is…

Not Zach Sanford.  Sure, he is the only rookie to make the club out of training camp, but this is our chance to go off the board here, and we’ll do just that.  Jakub Vrana was 16-18-34, plus-7 in 36 games for the Hershey Bears last season.  He had points in 14 of the Bears’ last 19 games.  In the postseason he was 8-6-14, plus-8 in 21 games.  Vrana might spend most of his 2015-2016 season in Hershey further acclimating himself to the North American game, but he is going to show Capitals fans why it is that his stay in Hershey is not likely to extend beyond this season.

5.  The road to the Stanley Cup will go through Pittsburgh…again, but with a happier ending.

Just as they did in 2012, when the Caps eliminated the Boston Bruins, the Capitals will eliminate the defending Stanley Cup champions in the first round of the postseason, although this time it will not take a Joel Ward (or anyone else) overtime goal in Game 7 to do it.  Three times, the team winning the second of their consecutive Presidents Trophies won the Stanley Cup (Edmonton in 1987, Calgary in 1989, and Dallas in 1999).  Washington will make it four.

Posted by The Peerless at 10:20 PM No comments:

“Your own positive future begins in this moment. All you have is right now. Every goal is possible from here.”
― Lao Tzu

Each of the Washington Capitals’ last two seasons ended with a goal in overtime, both on the road, both with the deafening roar of opponents’ fans spilling down on them.  Both of them with goaltender Braden Holtby face down in his own crease, the puck from the season-ending goal behind him.  Don’t even try to imagine what that feels like.

It was a sour ending for what had been a sweet season for Holtby, who set a club record for wins in a season (48) and tied an NHL record for victories in a season.  He jumped into second place in all time wins in Capitals franchise history (149).  He posted his best goals against average in a season in which he appeared in more than 20 games (2.20).  For the fourth straight season he posted at least three shutouts and has the second-most such seasons in franchise history (Olaf Kolzig: 6).  He extended his franchise high in .920-plus save percentage seasons with his third (minimum: 30 games).  Holtby had just nine losses in regulation in 66 games all season, the second fewest number of losses in regulation time for a goaltender appearing in at least 60 games in a season, just one more than the nine regulation losses Ken Dryden suffered in 64 games with the 1971-1972 Montreal Canadiens.  It was a regular season good enough to make him the third goaltender in club history to win the Vezina Trophy as the league’s outstanding netminder (Kolzig, Jim Carey).

Holtby took his place among the elite goalies in the league in 2015-2016.  By season’s end, his 135 wins over his four full seasons in the league led all NHL goaltenders.  His 20 shutouts (he had three last season) was better than all but one goaltender (Marc-Andre Fleury: 21).  Over the last four seasons, he ranks fifth among NHL goaltenders in complete games played (more than 55 minutes of ice time) in which he allowed fewer than two goals.  He was one of four goalies last season with more than 20 such games last season.

Braden Holtby’s dominance last season was amazing.  The 103 standings points he accounted for with his 48 wins and seven overtime/shootout losses was more than all but two entire teams in the league in 2015-2016 (not including the Caps).  He did not lose consecutive decisions until he took overtime loss decisions in his 64th and 65th games of the season (they happened to be the only consecutive games in which he allowed more than three goals).  He did not lose consecutive decisions in regulation all season (he has gone 79 regular season games, and counting, without losing consecutive decisions in regulation, dating back to the 2014-2015 season).  He was also a stopper.  When losing a decision, Holtby’s record in his following appearance was 16-0-1, 1.76, .932, and only once in those 17 games did he allow more than two goals.

The short answer to that question is “no.”  Any Caps fans who would see a 40-plus win season for Holtby without approaching last year’s win total as a “disappointment” does not understand just how special last season was for Holtby and the Caps.  But for the time being, Holtby has the benefit of a team in front of him that can score, and deep and improving defense, and a goaltending coach in Mitch Korn that has tapped the rich vein of skill and focus that has helped raise Holtby’s game to an elite level.  To that extent, a season hovering around 40 wins (he has two of the 26 40-plus win seasons since the 2004-2005 lockout), a goals against average under 2.30, and a save percentage over .920 can be a “normal” level of production for Holtby in his prime.

There is a “new normal” in which he and the Caps would be more interested in finding, though.  Holtby is the only goaltender in more than 25 years to have appeared in at least 20 postseason games and post a goals against average of less than 2.00 (1.87) and a save percentage higher than .930 (.937).  Even if you look at the three second round series in which he has played (and in which the Caps were eliminated), you wonder what the problem is.  In 20 second round games, he has a goals against average of 2.06 and a save percentage of .933 (both numbers are better than the playoff Matt Murray posted for the Penguins in winning the Cup last spring).  He also has a win-loss record of 8-12 in those 20 second round games (7-11 in one-goal decisions, 1-6 in overtime).  Only once in eight games in which he allowed three or more goals in a second round game did he earn a victory (a 4-3 overtime win over Pittsburgh in Game 1 last spring).  More wins with that level of performance is not unreasonable and would certainly be welcomed as a new normal.

Over the last four seasons, two goaltenders have appeared in at least 100 regular season games, have a goals-against average of 2.40 or lower, a save percentage of .920 or higher, and 20 or more shutouts – Carey Price and Braden Holtby.  That is a pretty choice neighborhood.  In the postseason, two goalies have appeared in at least 20 games over the same four years, have a goals against average under 2.00, have a save percentage over .930, and posted four or more shutouts – Tuukka Rask and Braden Holtby.  If you are asking Holtby to do more, you might be a bit picky.

But if wins are not the proper measure of a goaltender’s skill or worth in the regular season, it’s the only measure that applies in the postseason.  We missed that conversation about the best postseason goalies over the last few years that included mention of Holtby, although his numbers certainly suggest he could stand among others in that group.  What it suggests is that while goalie is the most important position in the postseason, having the incumbent shine is not a sufficient condition for postseason success.  In that respect, all the disconnects between Holtby’s individual performance and that of the Caps in the playoffs are a part of the past.  His and the Caps’ positive future begins in this moment. All they have is right now. Every goal is possible from here, even a Stanley Cup.

Posted by The Peerless at 2:07 AM No comments: