The Washington Capitals started Week 9 with an air of uncertainty, having played their previous three weeks to a combined .500 record (4-4-1).  It was getting time to show that they were comfortable in a Barry Trotz scheme and that they could turn that new found comfort level into wins.  By the end of Week 9, three were signs that the light was going on over the collective heads of the team. 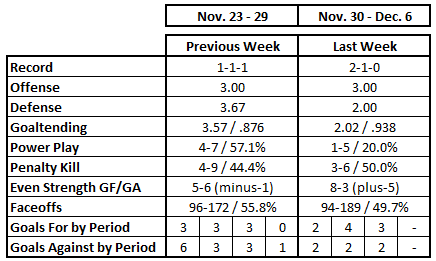 When the Caps ended Week 8 by dropping a decision to the Toronto Maple Leafs by their largest goal margin of the season (6-2), they had the look of a team that was lethargic and lacking focus.  Then the Caps fell behind the Vancouver Canucks, 3-1, in the second period of their first contest of Week 9, it looked as if the Caps were in a full dive.  Starting with John Carlson’s goal late in that second period, though, the Caps outscored opponents, 8-3 over the next seven-plus periods of hockey and won or tied each of the six periods in the last two games of the week. 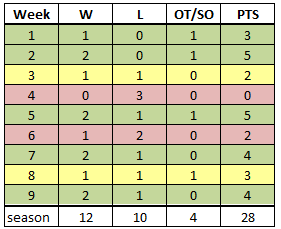 On the other hand, the Caps got scoring from some unexpected sources.  Jay Beagle had goals in each of the two games to end the week, the first time in his career he scored goals in consecutive games.  Brooks Laich scored a pair, his first two goals of the season.  John Carlson had a two-goal game, the first multi-goal game of his career.  Add in single goals by Karl Alzner (breaking a 42-game streak without one), Evgeny Kuznetsov (promoted from the fourth line to the second in place of scratched Andre Burakovsky against New Jersey), and Eric Fehr (breaking his own six-game streak without a goal), and it was a week for the support troops.

It was something of an odd week for the Caps and a lesson in looking at numbers at too high a level.  Looking at the possession numbers at 5-on-5, the Caps had their best game of the week in their lone loss, finishing with a 55.88 Corsi-for percentage in their 4-3 loss to Vancouver.  Their worst game of the week came against the New Jersey Devils – a 37.50 Corsi-for percentage at 5-on-5 (numbers from war-on-ice.com).  That New Jersey game dropped the Caps from a 53.74 Corsi-for percentage for the first two games of the week at 5-on-5 to 49.01.  When tied, though, the numbers behaved as one might have expected.  The Caps were below 50 percent against the Canucks (49.06), while they did well in their two wins (58.06 against Carolina, 52.08 against New Jersey).

The flip side of this is that Justin Peters has not started and finished a game since November 15th, a span of nine games and 21 days.  Given the importance of the upcoming schedule (ten Eastern Conference games to end the calendar year, seven of them against division rivals), Holtby is likely to be leaned on heavily.  That he is in a good place, consistency-wise, is a good sign as the Caps plunge ahead with that schedule, but Peters needs to demonstrate he can provide reliable relief, too.

Although Week 9 was an efficient week in one respect – 20.0 percent, making it eight weeks in nine that the Caps were 20 percent or better – it was not in others.  The Caps were 1-for-7 shooting in 9:46 in total power play time.  The takeaway number here might be “1.”  Alex Ovechkin managed one power play shot on goal in 9:27 of power play ice time.  It would be Nicklas Backstrom and Evgeny Kuznetsov leading the team in shots with two apiece (Kuznetsov getting the lone goal).  What makes this worthy of notice?  Those guys play the right wing wall on the power play, suggesting that teams are giving away the shot from that side to prevent the back door one-timers to Ovechkin. 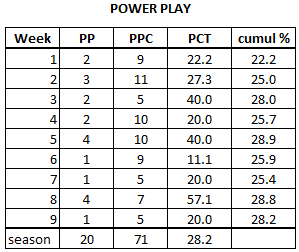 The Good… denying the Carolina Hurricanes as much as a single power play opportunity and allowing the New Jersey Devils only two to end the week.

The Bad… the second straight week that the Caps were at or below 50 percent on penalty killing overall.

The Ugly… allowing the Vancouver Canucks three power play goals on six shots in 4:48 of power play time in the first game of Week 9.

As a Caps fan one would like to take away the fact that the week ended a lot better than the way it started.  It does not hide the fact that the Caps finished the week 28th in the league in penalty killing, and Braden Holtby is 27th of 38 goalies appearing in ten or more games in shorthanded save percentage (.855).  It is not that he has faced uncommon shot burdens.  He is 23rd among that group of goaltenders in total power play shots faced (76).  If there is an aspect of Holby’s game that can use some shoring up, this is it.  He is, after all as they say, often required to be the team’s best penalty killer. 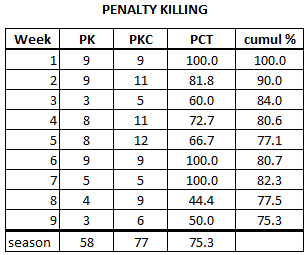 It was a very good week for the Caps in this regard.  They upped their total number of 5-on-5 goals for the season by more than 15 percent (from 38 to 44).  They also displayed a consistency on the other side of the ledger, allowing just one even-strength goal in each of the three games. They won or tied in even strength goals in each of the three games as well.  If that is a trend, it would be a good one to have, if the Caps can maintain a dominant power play and improve their penalty killing.

Week 9 was a bit of an odd week in the circle for the Caps.  Sure, Nicklas Backstrom took the lion’s share of the total draws (69 of 189, of which he won 37: 53.6 percent), he usually does.  It was the rest of the team that looked a bit odd.  Eric Fehr, the converted winger, took the second highest number of faceoffs (43, inning 20 for a 46.5 percent win share).  The second line?  The week split between Andre Burakovsky and Evgeny Kuznetsov in that role, but between them they took only 16 faceoffs, winning seven (43.8 percent).   Meanwhile, there was Michael Latta taking 26 draws from the fourth line, winning 12 (46.2 percent).  It was quite a bit to go on in a week in which the Caps were one draw under 50 percent.

The Caps came into the week as a team that did not perform as well late as they did early in games.  Going into Week 9 the Caps were a minus-5 in goal differential in the third periods of games.  What they did was win the third periods, 3-2, and the second periods for good measure, 4-2.  That was the difference in the week for the Caps, who got the game-winning goal late in the third period of their win over Carolina (nullifying the goal the Hurricanes scored earlier in the period to tie the game) and getting a pair in the second period against the Devils to put New Jersey behind the eight-ball going into the last 20 minutes, down 3-1 in what would be a 4-1 Caps win.  It was evidence, at least late in the week, of playing the “60 minute game” with more focus.

Maybe Week 9 was a tease, maybe it was the first step in that long-awaited winning streak the Caps have hinted at from time to time (and failed to produce).  Either way, closing the week outscoring opponents 6-2 in two games, being perfect in limited shorthanded situations faced (2-for-2), and getting a power play goal in four opportunities, while finishing on the good side of the close-score possession numbers is what you are looking for to sustain a level of success.  And, the Caps did this largely without much in the way of offensive contributions from it first line.  In that lies a caution.  Secondary scoring is “secondary” for a reason.  Sustaining a level of success will be difficult if the “primary” scoring is lacking.  That will be something to look for in Week 10.

Posted by The Peerless at 10:35 AM No comments: