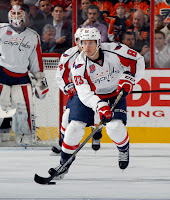 “Chaos is inherent in all compounded things. Strive on with diligence.“
-- Buddha

Ten skaters, two goaltenders, four officials, and one puck.  Even in an enclosed space 200 feet long and 85 feet wide, those are ingredients for chaos.  And part of the chaos are those elements, large and small, obvious and subtle, that combine to favor one team or another.  Mastering any one of them is a sought-after characteristic of an NHL player, be it scoring goals, having the vision to orchestrate an offense, having the fortitude and the physical attributes to intimidate opponents, or even to master one of the arcane but often ignored facets of the game.

Washington Capital forward Jay Beagle is not in the National Hockey League because he has a scorer’s hands or a passer’s vision.  He is in the NHL because he has diligently mastered some of the less appreciated skills that are important to the success of a team.  One of them is faceoffs.  Since 2008-2009, his first season in the NHL, Beagle ranks eighth among active players in faceoff winning percentage at 55.6 percent (minimum: 1,000 faceoffs taken).  It is a skill that is sometimes overlooked, other times dismissed, sometimes considered critical only after you lost one that eventually ended up in the back of your net.  This past season, Beagle finished third in faceoff winning percentage among 114 skaters taking at least 500 draws (58.1 percent), behind only Ryan Kesler (58.5 percent) and Jonathan Toews (58.6 percent).  The difference between Beagle finishing third and first was three faceoff losses in 637 draws taken.  It was not much.

Then there is penalty-killing, another of those skills at times overlooked, except when the opponents score a power play goal.  On the league’s second-best penalty killing unit, Beagle averaged 1:59 in shorthanded ice time, second among forwards who finished the season with the team and first among those who played the entire season for the Capitals.  It was the second-highest average shorthanded ice time he recorded in his six full NHL seasons, topped only by the 2:07 per game that he recorded in 2012-2013. 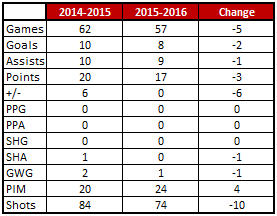 Fearless’ Take… Only once in six full seasons has Beagle finished a season below 55 percent in faceoff wins (51.7 percent in 2013-2014), and never in those six seasons did he finish with more charged giveaways than credited takeaways.  This season he was 58.1 percent in faceoffs overall and 20-12 in his takeaway-to-giveaway ratio.

Cheerless’ Take… It would be nice if he could put up those numbers in those obscure categories in more games.  He’s had something of an injury bug the last two seasons.  Two years ago it was illness, an upper body injury, and a shoulder injury that limited him to 62 games.  This season it was a hand injury that limited him to 57 games.  And those possession numbers weren’t so hot.  Maybe that’s the 3rd/4th liner in him, but he had the fourth-worst Corsi-for/Relative at 5-on-5 among forwards appearing in at least half of the Caps’ games (minus-1.84; numbers from war-on-ice.com).

Odd Beagle Fact… When the Caps lost to the New York Rangers, 3-2, on March 4th, it was the first time that the Caps lost a regular season game in regulation in which Beagle scored a goal in his career.  To that point, the Caps were 22-0-5 in games in which Beagle lit the lamp.  He started a new streak on April 1st with a goal in a 4-2 win over the Colorado Avalanche.

It is not often that a “grinder” gets a game-winning goal, and off a nasty snipe to boot, but that’s just what Jay Beagle found at the bottom of his stocking on the day after Christmas.  Early in the second period he took a pass from Tom Wilson at the top of the right wing circle, took one step in as he settled the puck, and rifled a snap shot over the glove of goalie Mike Condon into the top near corner.  It was the game-winning goal in the Caps’ 3-1 win over the Canadiens, Beagle also finishing a plus-2 on the night.

On a late November night at Verizon Center, Jay Beagle had the misfortune to be on the ice for the first goal of the game and the last one, both of them scored by the Dallas Stars in a 3-2 loss.  The game winner came mid-way through the third period as Jason Chimera tried to thread a pass past Jason Spezza to Beagle, who had taken a step toward the blue line in anticipation of a breakout.  The Puck made it only as far as Spezz, though, who filled into the space Beagle vacated, snapping the puck past goalie Philipp Grubauer for the winning margin.  It was one of only two games this season in which Beagle finished a minus-2.

It says a lot that Jay Beagle finished tied for fourth in goal scoring for the Caps in the postseason, three in 12 games.  It was as many goals as he had in 37 career playoff games before this season.  It might say something else that he had two of those goals in the first three games of the first round series against the Philadelphia Flyers, then wrapped up the postseason with one goal on 12 shots in nine games, that one coming in an overtime loss in Game 4 to the Pittsburgh Penguins.  There was this play, though, early in overtime of Game 6…

Not every great play by a skater is a goal, and not every great save is made by a goaltender.  You do what you have to do, and sometimes a little luck plays into it, too.

Hockey is like the quote the Tom Hanks character uttered in “A League of Their Own” in describing baseball:

“It's supposed to be hard. If it wasn't hard, everyone would do it. The hard... is what makes it great.”

And that is what makes a player like Jay Beagle one worth rooting for.  Beagle is not going to enjoy a long NHL career on the basis of his laser wrist shot or his ability to see the game better than anyone else to set up teammates for goals.  His stock and trade is doing the less glamorous jobs well – taking faceoffs, matching up against the other team’s best players, killing penalties, and making the odd save.  In his way, Beagle’s ability to carve out a niche for himself doing those deeds is testimony to just how hard the game is, but at the same time having room for players who out of diligence and hard work do those other jobs well.  And that is what makes Jay Beagle find his place in the chaos.