The Peerless Prognosticator is ON THE AIR!!! -- Game 38: Predators at Capitals, December 31st

The Washington Capitals wrap up the 2018 portion of the season on Monday afternoon when they host the Nashville Predators in an afternoon tilt at Capital One Arena.  The Caps will end the year taking a four-game winning streak into this contest, part of a 16-3-0 run since November 16th that propelled them to the top spot in the Metropolitan Division.

Meanwhile, the Predators have fallen on hard times lately, having lost six straight games (0-5-1) overall.  A lack of scoring has been the obvious problem, Nashville recording only 10 goals in those six games.  It is part of a longer scoring drought that has seen the Predators put up only 25 goals in their last 12 games and not scoring more than three goals in regulation over that span.

During this 12-game scoring drought, Nick Bonino leads the club with four goals.  Caps fans will remember Bonino as the player who ended their 2015-2016 season while with the Pittsburgh Penguins.  It was his goal at the 6:32 mark of overtime in Game 6 of the second round of the playoffs that sent the Caps home for the summer and helped the Penguins toward the first of two consecutive Stanley Cups.  Bonino is now with his fourth NHL team, signed as a free agent by Nashville in July 2017.  Although he is more of a grinder/secondary scorer, he did post 22 goals with the Anaheim Ducks in 2013-2014.  His goal scoring has not been especially supportive of Predators success this season, Nashville having a modest 3-4-0 record in games in which he recorded a goal this season.  Bonino is 4-3-7, minus-8, in 17 career games against the Capitals. 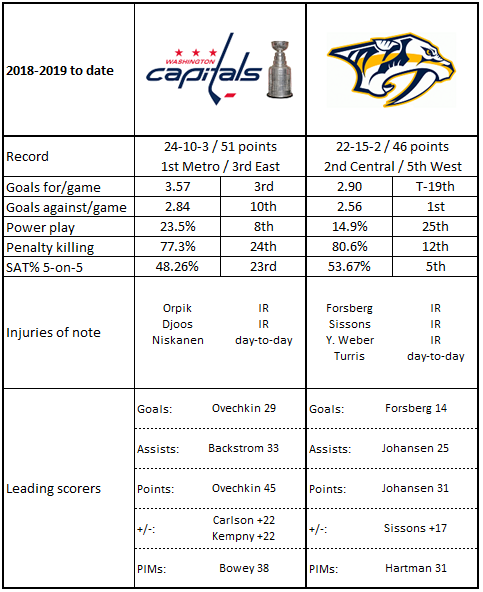 1.  Nashville has had two very different seasons on the road.  They went 8-0-0 in their first eight road games, but they are 0-8-2 in their last ten road contests.

2.  The Predators are the only team in the league without a win on the road since November 12th, when they started their current road losing streak.

5.  Perhaps the strangest fact of Nashville’s 0-8-2 record in their last ten away games is that they rank sixth in shot attempts-for percentage at 5-on-5 (52.34).

2.  Over that same span, the Caps are tied for sixth in goals scored (73, with Pittsburgh) and have allowed the fewest number of goals (45).

4.  Since November 16th, only the Calgary Flames have more empty net goals (seven) than the Caps (six).

Since November 12th, when Nashville started their 0-8-2 run on the road, 735 skaters have dressed in the NHL.  Only one of them – Evgeni Malkin – has a worse plus-minus (minus-12) on the road than Nashville’s Ryan Johansen (minus-11).  Say what you will about plus-minus, but that is not a good number.  It really has been an odd set of circumstances for Johansen, who is 1-7-8 in those ten road games and has points in six of them.  From a broader perspective, though, it is consistent with his career profile, which definitely tilts toward higher performance in home games.  He has 207 points in 277 career home games, but only 166 in 274 road games.  He is a career plus-25 on home ice, but only minus-17 in career road games.  The fact that stands out about Johansen over this 0-8-2 run is that he was on ice for 18 of 37 goals against.  Things happen when he is out there, not all for the good recently.  Johansen is 5-11-16, plus-2, in 18 career games against Washington.

When John Carlson snapped a shot the length of the ice into an empty net to secure a 3-1 win over the Carolina Hurricanes last week, it broke a 26-game streak without a goal.  The flip side of that streak without a goal is that Carlson recorded 22 assists over those 26 games and was a plus-16.  Only two defensemen had more assists in that span (Brent Burns and Mark Giordano with 23 apiece), and despite going without a goal Carlson was tied seventh in points among defensemen in that stretch of games.  His plus-16 was seventh among blueliners in that stretch.  More important, the Caps were 11-2-0 in games win which Carlson recorded a point over those 26 games.  Carlson will go into this game as one of two defensemen in the league who have averaged more than a point per game this season.  His 1.03 points per game trails only Toronto’s Morgan Rielly (1.13).  Carlson is 0-8-8, minus-5, in 12 career games against Nashville.

The Capitals held the top spot in the Metropolitan Division on January 1st, and regardless of the outcome of this game, they will hold it as the clock strikes midnight on 2018 with their first Stanley Cup won in-between.  It is the year Caps fans might not want to end.  But end it will, and with a win the Caps will reach the 50-win mark for the calendar year (50-23-7).  It will be a challenge, despite the Predators missing some key pieces.  Filip Forsberg is on injured reserve with an upper-body injury, and Kyle Turris is day-to-day with an upper-body injury.  P.K. Subban just returned to the Predator lineup last Thursday after being out of the lineup for more than a month with an upper-body injury.  Still, Nashville is like that dormant volcano that can erupt at any time.  Caps fans will be hoping that does not happen until the new year begins.

Posted by The Peerless at 12:06 AM No comments: