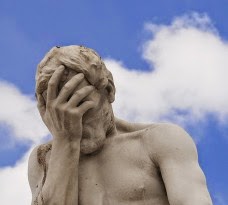 On Friday, January 24th, the Washington Capitals visited the New Jersey Devils.  In that game the Devils scored goals in each of the first and second periods, then held on after the Caps halved the lead in the third period to escape with a 2-1 win.  It was the last in a seven-game losing streak for the Caps (0-5-2)

Last night the Caps visited the Devils once more in what would be a mirror image of that late January game, scoring first on Alex Ovechkin’s 49th goal this season, but letting the lead and the game get away as the Devils scored single goals in the second and third periods to escape with a 2-1 win to preserve their flickering playoff hopes.

For the Caps, it probably spells the end of their playoff chase.  The loss -- their fifth in a row (0-3-2) -- leaves Washington four points plus a tie-breaker behind the Columbus Blue Jackets for the last wild card spot in the playoffs.  Making the task even more daunting is that in addition to the Blue Jackets, the Caps have these Devils and the Toronto Maple Leafs to climb over to reach the post season and only five games left in which to do it.

Ovechkin got it started when Mark Fayne failed to clear the puck for the Devils out of his own end.  Ovechkin picked off his attempted pass through the middle, but Patrik Elias knocked the puck off his stick.  Elias and Mikhail Grabovski dueled for the loose puck in open ice, Grabovski winning that match up. Grabovski returned the puck to Ovechkin in the low slot, and his snap shot beat goalie Cory Schneider to the blocker side to give the Caps a 1-0 lead at 10:12 of the first period.

And that would be it for the Caps’ offense.  Tuomo Ruutu got the Devils even mid-way through the second period when he tipped a drive by Eric Gelinas from the left point.  It was the product of a continuing problem for the Caps, an inability to control the puck in their own end and skate it or chip it out of danger.

That would be how the teams would remain until the clock wound down to the five-minutes remaining mark of the third period.  At that point, another recurring theme reared its ugly head – letting teams advance with speed through the neutral zone.  Count with me, will you?  From the Devils’ goal line Peter Harrold sent a pass up to Ryan Carter just inside the Devils’ blue line.  Carter skated out from the wall near the players bench and turned up ice.  Just before getting to the red line, Carter passed the puck off to Marek Zidlicky.  From there, Zidlicky put on the brakes and returned the puck to Carter steaming down the middle at the Caps’ blue line.  Carter sped past Jay Beagle, and before Mike Green could sweep the puck off Carter’s stick, Carter ripped a wrist shot low over goalie Jaroslav Halak’s left pad.  180 feet, three passes, one goal.

-- New Jersey won this game despite losing Patrick Elias in the first period, Adam Henrique in the second, and Jacob Josefson in the third period to injuries.  The Devils finished the game with eight healthy forwards.  As it was, Travis Zajac skated almost 24 minutes, Jaromir Jagr skated more than 25 minutes.  For Jagr, the 25:28 was his highest ice time total in a regular season game since skating 26:18 for the New York Rangers in a 2-0 loss to Ottawa on October 6, 2007.

-- Alex Ovechkin’s goal was his first even strength point since February 27th against Florida.  By our count, that was 251:16 in even strength ice time between points.

-- The Caps had their chance, chances actually, early.  They had 52 seconds of a 5-on-3 power play early in the first period and the opportunity to put the Devils in a hole.  They did not get a shot on goal.

-- Mikhail Grabovski recorded his first point for the Caps since January 14th, so there was that.

-- Marcus Johansson is all of a sudden a gattling gun…well, by his standards.  This was the third game in four that he recorded at least three shots on goal (he had three).  That makes 11 shots in four games, more than ten percent of his season total (102).

-- Nicklas Backstrom was the only Cap to finish the night on the right side of 50 percent in the circle (9-for-14).

The Capitals could find themselves eliminated from the playoffs as soon as Tuesday, unless they get help…from teams like the New York Islanders (who both the Caps and Columbus play this weekend).  That is what it has come down to.  Of course, the Caps have not done a very good job of helping themselves this season, and that is why it has come down to this.  Last night was merely the latest chapter in a volume of this franchise’s history that no one is going to want to read in the future.