“At times it is folly to hasten at other times, to delay. The wise do everything in its proper time.”
-- Ovid

It is an article of faith in the NHL that defensemen take longer to develop than do forwards.  That is something Washington Capitals fans might want to put on a Post-It note and affix to their keyboards before tweeting about Madison Bowey.  He was the 18th defenseman taken in the 2013 entry draft, and when the 2017-2018 season ended, he was one of just 24 of the 69 defensemen taken in that draft to skate in at least one NHL game.  The 51 games in which he appeared is more than five of the 17 defensemen taken ahead of him in that 2013 draft.  In that respect, the third-round/53rd overall pick in the 2013 draft might be thought of as “on time” in his developmental arc.

The 2017-2018 season might have been a complete immersion into life in the NHL, but circumstances and a sense of urgency intervened as the season wore on for Bowey and the Caps.  He did not make his NHL debut until Game 6 of the regular season, subbing for injured defenseman Matt Niskanen against the Philadelphia Flyers, and it was not the most auspicious of entrances.  Rookies do not dream of skating a shade less than 15 minutes, make no marks on their score sheet line, and end up on ice for three goals in an 8-2 pasting in the other team’s home opener.  That was Bowey’s introduction to the NHL.

Consider it an education.  And he did learn.  He would not be a minus-3 again.  In fact, he was a minus player in only 12 of the other 50 games in which he played.  And there is the important point.  Bowey played in 51 games this season.  In fact, he appeared in 51 of 55 games following his five-game absence to start the season.  However, the Caps found themselves at a crossroads when the trading deadline approached.  After the Caps lost to the Chicago Blackhawks, 7-1, in what in retrospect might have been the most illuminating loss of the season, the Caps were faced with a choice of continuing to dress Bowey (who had only his second game worse than minus-1 against the Blackhawks when he finished minus-2), or they could seek an upgrade in the trade market.

The Caps chose the latter, trading for defensemen Michal Kempny and Jakub Jerabek two days apart.  Bowey appeared in two more games for the Caps, but his season ended with his appearance in a loss to the Tampa Bay Lightning on February 20th.  He was reassigned to the Hershey Bears in the AHL on February 26th and did not dress again for the Caps this season. 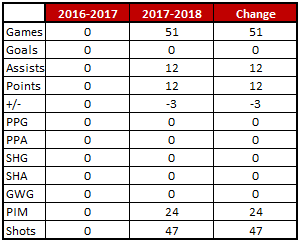 Fearless’ Take… As if to drive home the point that development of defensemen requires patience, Madison Bowey was just the 13th defenseman in Caps history to appear in at least 50 games in his first season with the club (which must be distinguished from “rookie” season, Bowey being the 18th “rookie” in franchise history to do so) and only the fifth since the 2005-2006 season (Mike Green, John Carlson, Dmitry Orlov and Christian Djoos being the others).

Odd Bowey Fact… Madison Bowey is the only one of 18 rookie defensemen in Capitals history to appear in at least 50 games (51) and fail to record at least one goal.

Sometimes, it’s about the team and being part of a team effort.  The Caps opened the season going alternating losses and wins on the road, taking a 2-3-0 record to Boston in early November.  On the other hand, the Bruins had not lost in regulation on home ice in almost a month, since their only regulation loss at TD Garden on October 9th against the Colorado Avalanche.  The Caps got the early jump on the Bruins, scoring twice in the first period on goals by Tom Wilson and Alex Ovechkin.  The Bruins halved the deficit on a goal by David Pastrnak early in the second period, but the Caps restored their two goal advantage late in the period of Tom Wilson’s second goal of the game.  The Bruins managed to make thing interesting with a power play goal by Pastrnak with less than three minutes left, but the Bruins could get no closer.  Bowey had one of his better all-around games of the season, recording three shot attempts (two on goal) and two hits to go with the team’s only plus-3 in 14:39 of ice time.

It would be the last game Madison Bowey would dress for the Caps in the 2017-2018 season.  What made it forgettable was not that any one thing went horribly bad, but that it was a game that resembled several others in the run up to his reassignment.  His 14 shifts was the fewest among defensemen in that game, and his 10:24 in ice time was his third-lowest of his season.  He finished with two shot attempts (one on goal), two hits, and he was on the ice for the Lightning’s second goal of the game, that by Chris Kunitz, part of a disastrous first period in which Tampa Bay scored three goals on eight shots on their way to a 4-2 win.

Postseason… Bowey did not dress for the postseason.

It’s all part of a process.  Not a lot of defensemen jump into the lineup and skate 20 minutes a night for 75 or more games as a rookie (then again, not a lot of rookie defensemen get their names engraved on the Stanley Cup; his 51 regular season games presumably make him eligible).  For the record, in the 12 full seasons since the 2004-2005 lockout (not including the abbreviated 2012-2013 season), only 20 defensemen in their first NHL season appeared in 75 or more games and logged at least 1,500 minutes in ice time.  Madison Bowey will be only 23 years old when the 2018-2019 season opens.  If Brooks Orpik, having been bought out by the Caps yet still a possibility as an unrestricted free agent, does not return to the Caps for next season, Bowey would be considered at the very least a favorite to get one of the six slots on defense, if not the favorite.  It should not be lost on fans that Bowey was held to just 34 games in the 2016-2017 regular season with the Hershey Bears in the AHL due to injury, a lacerated ankle tendon, an injury from which he might still be coming back.   If he is fully recovered and was able to use his reassignment wisely to make progress on his development arc, he might be a player to watch to see if he makes a significant jump forward in his role with the Caps.