Week 16 for the Washington Capitals seemed to include a lot more than a week’s worth of action.  In three games Caps fans witnessed goals galore despite a struggling power play, stinginess in the defensive end despite the struggles of their number one goalie, a glimpse of the future in goal, and records falling like autumn leaves courtesy of The Captain.  When it was over, the Caps were once more atop the league standings, a good place to be as they start their eight day bye/All-Star Game break. 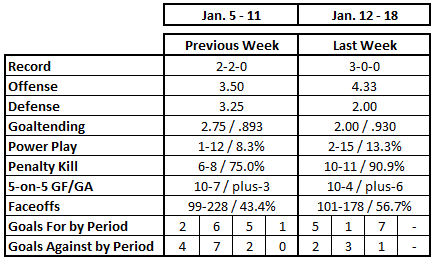 It was a perfect week in the record book for the Caps, but it did not quite seem like one.  They jumped out to a 2-0 first period lead on the Carolina Hurricanes to start the week, but they could not add to that advantage to put the Hurricanes away decisively.  They duplicated their first period effort against New Jersey, getting out to a 2-0 lead, but they let the Devils crawl back within a goal twice before putting that game away late.

And then there was Saturday’s game against the New York Islanders. For the third time in three games the Caps scored first, but the Islanders came back to take a 2-1 lead into the first intermission and doubled their scoring output in the second frame to take a 4-1 lead and chase goalie Braden Holtby to the tunnel where backup goalies are seated at Nassau Coliseum.  It looked as if the Caps would post a winning week, but would end it with an effort that screamed “let’s get an early start on the break.”

But then, Carl Hagelin scored less than three minutes into the third period.  Alex Ovechkin got his second of the game less than three minutes later with a highlight reel goal.  Nine minutes after that, Tom Wilson tied the game by putting his frame in front of a Dmitry Orlov drive and redirecting it in.  Less than two minutes later, the Caps took the lead again with some opportunistic work and a nasty wrister from Jakub Vrana.  Ovechkin put the icing on the cake with an empty netter to complete the comeback and give the Caps a perfect win-loss week, their first since going 3-0-0 in Week 10.  It gave the Caps 33 wins at the break, tied for the second-most wins through 49 games in team history, with the 2016-2017 team.  Only the 2015-2016 team had more wins after 49 games (36). 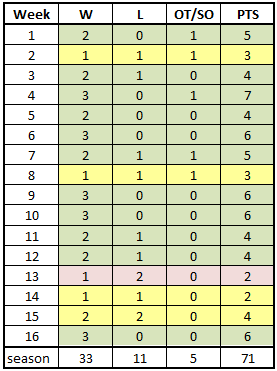 There was the good and the bad, even when averaging more than four goals a game for the week.  The good – the really good, in fact – was Alex Ovechkin posting eight goals in three games and recording three straight multi-goal games for the first time in his career, including a pair of hat tricks to end the week.  He scored the team’s first four goals of the week and had the game’s first goal in all three games.  With eight goals for the week, Ovechkin out-scored nine teams in the league for the week.

Jakub Vrana was the other Capital with a multi-goal week, putting the Caps up by a pair of goals in the third period of their 5-2 win over New Jersey in the middle game of the week and then potting the game-winner in the Caps’ stunning comeback win over the Islanders to close the week.  Both goals came at even strength, giving Vrana 21 of his 22 goals for the season at evens, tied with Buffalo’s jack Eichel for third-most in the league.

Carl Hagelin had a pair of timely goals, putting the Caps up by three goals in their 5-2 win over New Jersey and then starting the big comeback against the Islanders with an early third period goal.  The goals in consecutive games came at a welcome time for the Caps and for Hagelin, who had only one goal in his first 36 games before potting goals in consecutive games to end the week.

Tom Wilson broke a cold snap of his own with the Caps’ other goal for the week, his goal against New York breaking a seven-game streak without one and a run of just one goal in 13 games.  But that would do it for the goal scorers, four players accounting for all of them and Ovechkin accounting for almost two thirds of them by himself.  Scoring balance is a term that cannot be used to describe the Caps’ offensive output, the other 14 skaters going 0-for-60 in shooting.

There was not a lot more balance in points for the week, either.  Eleven skaters did record points, but four of them were held to a single point.  Ovechkin led the team with eight points, all goals, while John Carlson was next in line with five points, all on assists.  Carlson finished the week not only as the only Capitals defenseman to post more than 50 points in the team’s first 49 games of a season in Capitals history (Mike Green had 50 points in 48 of the team’s first 49 games of 2009-2010), he became the only Capitals defenseman to hit the 60 point mark through 49 games and only the fifth NHL defenseman to do it since 1979-1980.

In a more modest achievement, Nick Jensen recorded an assist in the win over the Islanders to close the week, snapping a 40-game streak without a point.

The Caps had a decent week on the defensive side of the puck, holding Carolina and the Islanders under 30 shots on goal.  Even with allowing New Jersey 34 shots, what might be viewed as a “score effect” outcome given the Caps holding a lead from the 15:17 mark of the first period through the end of the contest in a 5-2 win, the Caps extended their run of holding opponents under 30 shots to six of their last seven games and 14 of their last 16 contests.

The Caps also did a credible job in holding down even strength shot attempts.  They allowed 103 shot attempts by their three opponents at 5-on-5 for the week and extended their double-digit shot attempts differential to four games in the process (plus-51 overall).  The Caps did not finish the week with a negative shot differential in any situation (tied, close, ahead, behind) in any of the three games.

“MedStar, we have a problem.”  It does not have quite the ring of the famous (apocryphal) message from Apollo 13 to NASA Mission Control in 1971, but there is a problem that the Caps are going to have to address out at MedStar Capitals Iceplex over the break, and it is at the most important position on the ice.  The good news is that Ilya Samsonov put his stamp firmly on Week 16 in a good way, pitching a shutout, providing a solid effort in the middle game, and then coming into the last game of the week in relief and keeping the Islanders off the board to give his teammates a chance to come back.  He finished the week with a record of 10-0-0 (one no-decision), 1.60, .941, with one shutout in his last 11 appearances.

On the other side there is Braden Holtby, who is firmly positioned in a slump of the sort that has been rare in his career.  Given a 1-0 first period lead against the Islanders in his only start of the week, Holtby was the victim of unfortunate bounces and his own play to give up four goals on 22 shots through 40 minutes before being relieved by Samsonov to start the third period of the Caps’ game against the Islanders on Saturday.  He was taken off the hook for the decision, but that does little to make things better regarding his play of late.  In his last 11 appearances he is 3-7-0 (one no-decision), 3.75, .866, and he has been pulled twice.  And here is a fact that might chill a Caps fan to the bone if you are looking ahead.  Holtby’s record against Metropolitan Division opponents this season is 2-7-1 (one no-decision), 3.48, .875.  If his numbers generally do not improve, and his Metro numbers specifically, it is going to be a lot of pressure on a rookie goalie to sustain his own numbers and not succumb to a “wall” he might face with a level of workload he has not yet seen as a pro.

Another problem area that merits attention during the break is the power play.  Bouncing along at 15 percent or so is just something that should not happen with this skill level.  But there the Caps are, 10-for-71 (14.1 percent) over the last seven weeks, second-worst in the league (Columbus: 8-for-62/12.9 percent). 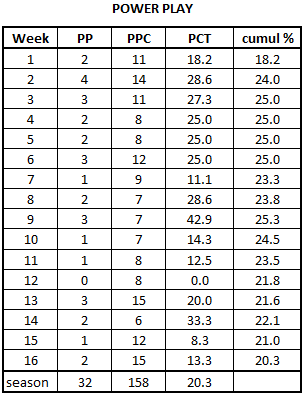 On the other side of special teams, the penalty kill returned to an efficient element after a couple of down weeks.  The ten kills in 11 shorthanded situations made the Caps 61-for-71 over the last seven weeks, the 85.9 percent penalty kill being second in the league in that span (Tampa Bay: 64-for-72/88.9 percent).  Even the Islanders scoring a power play goal, breaking a five-game streak without allowing one, did little to diminish the result.

The Caps were not particularly efficient in denying power play shots, giving up 15 in 16:42 of shorthanded ice time, but the plus-7:38 in special teams ice time differential made for a generally successful week. 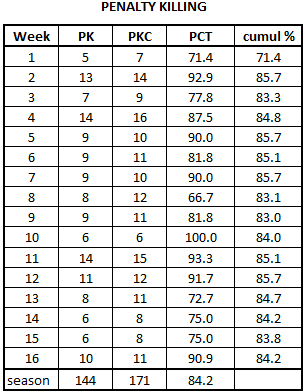 Week 16 was that rarity in the circle for the Caps.  They won all three zones in all three games.  They were especially productive in the ends, where they went 39-for-66 in the offensive end (59.1 percent) and 34-for-58 in the defensive end (58.6 percent).  It was not against the stiffest of competition in that regard, Carolina the only team of the three opponents to finish the week in the top ten in faceoff winning percentage (51.0 percent/10th), but one fights the opponent in front of them. 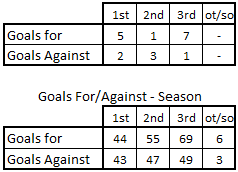 The perfect win-loss week pushed the Caps well past where they were through 49 games last season – six more wins (33 to 27) and 11 more standings points (71-60).  That is, in turn, and product of a 22-goal improvement in net goals (plus-32 this season to plus-10 through 49 games last season).  And drilling down further, there is the net improvement of 231 shots (113 more shots on goal and 118 fewer shots allowed) and a particularly noteworthy improvement of 254 fewer shot attempts allowed at 5-on-5.  These might be thought of as the basic, the simple foundational elements that have contributed to the Caps’ improvement in wins, losses, and standings points over last season. 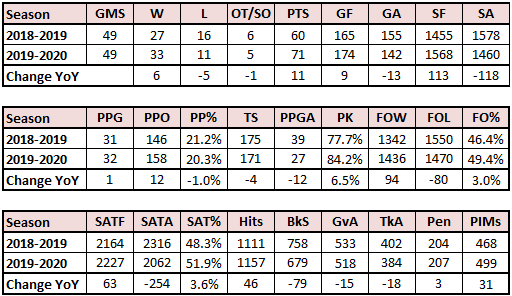 Sometimes the differences from year to year are subtle movements, getting a win instead of an extra time loss, scratching out a point in an extra time loss instead of losing in regulation.  However, as the Caps head into their eight-day break, the differences are not all that subtle.  This year’s club has traded losses in regulation for wins.  True, the Caps do have three Gimmick wins, a total that is tied for fifth-most in the league, but this is also a club with 18 multi-goal wins; only Colorado (22) and Toronto (20) have more.  Although the Pittsburgh Penguins have replaced the New York Islanders as the Caps’ chief competition for another Metropolitan Division title, the Caps’ pre-All-Star Game performance makes it hard for the Penguins, or anyone else, to overtake them.  But they do have issues to be addressed – the power play and goaltending among them (what keep the Captain from rating this a perfect week) – over the break to ensure that the last 33 games – and beyond – are as successful as the first 49 contests.