The Peerless Prognosticator is ON THE AIR!!! -- Game 21: Blackhawks at Capitals, November 21st

On Wednesday night, the Washington Capitals will take to the ice in a Thanksgiving Eve matchup against the Chicago Blackhawks that pits two teams looking to find momentum.  On Monday night, the Caps came back from two goals down to force overtime and grab a 5-4 win over the Montreal Canadiens at Bell Centre to atone for their 6-4 loss in Montreal to start the month and win consecutive games for only the second time this season.

Meanwhile, the Blackhawks come into this game looking for a spark, any spark.  After winning consecutive games in regulation for the first time this season in late October to give them a 6-2-2 record, they lost eight in a row (0-6-2) before winning two of their last three games coming into this contest, leaving them 2-6-3 in their last 11 games.

Patrick Kane has a hand in 11 of those 19 goals (3-8-11).  And this run is not a case of merely being on a hot streak, unless you think he has been on one all season.  He has points in 16 of the 20 games played to date, seven of them multi-point efforts.  His 25 points in 20 games is, for the moment, the second highest points-per-game (1.25) of his career (he had 1.29 points per game in 2015-2016, tops in the league that season).  Kane continues to impress, but he already deserves a place among the best players in the history of the franchise.  Before this season is over, he will likely be among the top ten players in Blackhawk history in games played (he needs 40 to pass Denis Savard for 10th place).  He is already fifth in team history in goals scored (324), fifth in assists (25 short of Doug Wilson for third place), fifth in points (853), and fourth in game-winning goals (55).  This season, he already has four multi-point games in nine contests on the road.  Kane is 4-5-9, minus-10, in 14 career games against Washington.

Henri Jokiharju was taken with the 29th overall pick in the 2017 entry draft.  The defenseman from Oulu, Finland, by way of the Portland Winter Hawks in Canadian junior, is the youngest player on the Blackhawks’ roster.  Of the 79 defensemen taken in that 2017 draft, he is one of only five to have dressed for at least one NHL game.  His ten points (all assists) leads his draft class in scoring and, perhaps surprisingly, is tied for the team lead among defensemen this season (with Brent Seabrook).  Jokiharju is at or near the top of his rookie class of defensemen in a variety of categories.  He is tied for the lead in that group in games played (21 through Monday night), tied for the lead in points (10), leads in assists (10), leads in shots on goal (47), is tied for sixth in credited hits (24), is tied for ninth in blocked shots (19), and is second in average ice time (21:21 per game).  He has cooled down some from a hot start, though.  After posting five points in his first three games this season, he is 0-5-5, minus-4, in his last 18 contests.  This will be Jokiharju’s first appearance against Washington.

Corey Crawford is in his 12th season as netminder for the Blackhawks.  He, like Kane, figures prominently among the leaders in franchise history in a number of categories.  He is third in games played by a goaltender in franchise history with 421 appearances, trailing only Glenn Hall (618) and Tony Esposito (873).  He is third in wins (235), trailing only Hall (276) and Esposito (418).  Crawford is the all-time leader among goalies with more than 75 appearances in goals against average (2.37), while his save percentage (.919) is tops among that group since that statistic has been recorded.  Crawford missed the first five games of this season as the result of a concussion he suffered in the 2017-2018 regular season that kept him out of the lineup for the entire 2018 portion of the Blackhawks’ schedule.  Since returning to the lineup on October 18th against Arizona, he has been a bit of a bad luck netminder.  Despite a 2.44 goals against average and a .922 save percentage, he has only a 5-6-1 record.  Part of the problem is his inconsistency to date.  In his 12 appearances he allowed three or more goals six times and allowed one or none (he has one shutout) six times.  Unsurprisingly, he is 5-0-1 when allowing one or no goals, 0-6-0 when allowing three or more, the Blackhawks not being the sort of team at the moment that can outscore his off nights.  Crawford is 3-4-2, 3.54, .884 in nine career appearances against the Caps. 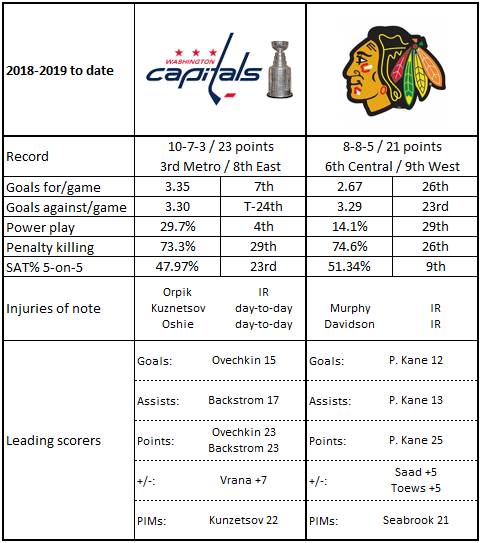 2.  About the only thing that has saved Chicago this month is that no team has been shorthanded fewer times (19, tied with San Jose) or taken fewer penalties (21).

3.  Chicago has played in a strange place between good and bad news.  On the bad side, they have six losses this season by one goal.  The good side, five of those losses were in extra time (no team has more such losses), so they did earn a standings point in each of them.  Odd related fact: the Blackhawks went to extra time in each of their first five games this season (3-0-2).

4.  If this game is a blowout, chances are it will not be the Blackhawks on the high side of the goal scoring.  Chicago has the third-worst winning percentage in games decided by three or more goals this season (.286).  Only Carolina and the New York Rangers are worse (.250).

5.  If the Caps score first, it will be a good sign.  Chicago is one of five teams in the league with a single win when the opponent scores first, worst in the league, and only Los Angeles has a worse winning percentage (.083) than Chicago (.111).

1.  The Caps played their seventh extra time game of the season on Monday night and earned their fourth win (4-3).  After 20 games last season the Caps were 4-1 in extra time after 20 games.

2.  The Caps allowed Montreal 44 shots on goal on Monday night at Bell Centre in the 5-4 overtime win.  They also allowed 44 shots on goal in the 6-4 loss on the same ice sheet on November 1st.  Those are the most shots allowed by the Caps in a game this season and half of the four instances of allowing more than 40 shots on goal.

3.  When Jakub Vrana recorded an assist against Montreal on Monday night, he became the eighth player to hit the ten-point mark this season through 20 games.  At this point last season, the Caps had six players with ten or more points.

4.  Through Monday’s games, only the Ottawa Senators had allowed at least one power play goal in more games (17) than Washington (15, tied with Philadelphia).

5.  Alex Ovechkin scored his 236th career power play goal on Monday night, tying Mario Lemieux for seventh place on the all-time list.  If those were the only goals he had in his career, he would rank 33rd among all active players, tied with Tyler Seguin.

It doesn’t matter what color jersey he wears, and he’s worn five of them, Chris Kunitz is among the most hated players in Capitals Nation in this era.  And it is not as if he hasn’t had a lot of years to cultivate that reputation.  Now in his 15th NHL season after being signed as an undrafted free agent by the Mighty Ducks of Anaheim in April 2003, Kunitz is the fifth-oldest skater to have dressed in the NHL this season at the age of 39.  He is in his first season in Chicago after spending last season with the Tampa Bay Lightning, and based on his performance to date, perhaps the end of his career is in sight.  He has two assists in 19 games this season while averaging a career low 10:52 in ice time per game.  Kunitz has never accumulated penalty minutes proportionate to his reputation as an agitator (he hasn’t averaged a penalty minute per game in more than a decade, not since 2007-2008 with Anaheim), but this season he has only one penalty for two minutes in his 19 games of work.  And, he has been a bit of an on-ice liability, even if indirectly.  He is in plus territory only once this season (plus-1 in a wild 7-6 overtime loss to Toronto on October 7th) and is a minus-7 overall.  Kunitz is 12-8-20, plus-5, in 36 career games against the Capitals.

Tom Wilson has waited a long time to make his season debut on home ice.  He served 16 games of a 20-game suspension to start the season (reduced to 14 games, so he did recoup some of the lost wages), and then he returned to the ice in time to accompany his teammates on a four-game road trip.  That it was a successful trip (3-1-0) seems not to be a coincidence with Wilson’s return.  While he spent his first five NHL seasons developing a reputation for a hard-nosed (or “dirty,” depending on who you root for) player, he has developed as an offensive complement on the top line to Alex Ovechkin and Evgeny Kuznetsov (or Lars Eller, who has filled in for Kuznetsov in his absence due to injury).

His early career development has displayed consistent improvements in goals, assists, points, and shooting efficiency.  But more than that, and in a manner that contemporary empirical measures might not be sufficiently sophisticated to capture, he has been what we here at “Peerless Central” refer to as the “emulsifier” between the oil of a Kuznetsov and the vinegar of an Ovechkin.  He is not, and seems unlikely to become considered among the elite power forwards of this generation, but he seems to be that player who skills marry well to those of his linemates that make the whole even more than the sum of the parts.  Certainly the early returns on his season to date suggest that.  In ten career games against the Blackhawks, Wilson is 4-4-8, plus-6.

Coming home from a road trip, the night before a holiday.  It would seem that there are sufficient distractions surrounding this game to put the outcome in doubt.  However, Chicago has plenty of problems of their own.  They recently dismissed a legendary coach in Joel Quennville (who was 6-6-3) for a rookie coach in Jeremy Colliton (2-2-2), who is younger than a few of his players.  It is a team that cannot score, especially on the road (ten goals in their last six road games and shut out twice).  Their goaltender is trying to get back into a rhythm after spending the better part of a year recovering from a concussion.  And, they haven’t won on the road in a month (0-5-1), not since a 4-1 win over the Blue Jackets in Columbus on October 20th.  Even with the distractions, this is a game that the Capitals should win to achieve their first three-game winning streak of the season.