The Peerless Prognosticator is ON THE AIR!!! -- Game 6: Capitals at Oilers, October 22nd

For Edmonton, winning has been an infrequent indulgence in recent years. They have not reached the post-season since losing in the Stanley Cup final to the Carolina Hurricanes in 2006. In their last five seasons and five games into this one they have an aggregate record of 133-202-47. On an 82-game basis, that works out to 29-43-10. That is how, since 2007, a team gets seven top-ten picks in the space of eight drafts, three in succession being first overall draft picks (2010-2012).

This edition of the Oilers, even with the three first overall draft picks – Taylor Hall, Ryan Nugent-Hopkins, and Nail Yakupov – in the lineup, has had trouble scoring goals. Hall accounts for four of the 14 goals scored by Edmonton in five games. Yakupov and Nugent-Hopkins have one apiece; the other 19 skaters accounting for the other eight goals.

There are two faces that Caps fans will recognize. Matt Hendricks and Boyd Gordon were faithful foot soldiers for the Caps and play similar roles for the Oilers. Neither is expected to generate much offense, their games being more of feisty grittiness (Hendricks) and responsible steadiness (Gordon). One thing Caps fans might have expected is for Hendricks to employ the “paralyzer” trick shot he used to such effectiveness in Washington with similar results in Edmonton. The Oilers have participated in just one shootout so far, Hendricks not being called upon to join in. He took only one turn in the apres-hockey portion of the game in 33 games with the Oilers last season.

At the other end of the rink the results have been, well, less than hoped for. Ben Scrivens and Viktor Fasth each have goals against averaged north of 3.50 and save percentages south of .900. And, it is not as if the defense in front of them has shined. Plus-minus has limited utility on an individual basis, but when seven of eight defensemen are in “minus” territory (Martin Marincin is “even” in two games), it says something unkind. They’re not too good. And this is with a group that includes a free agent they sought (Mark Fayne), a quasi-free agent (Nikita Nikitin, whose rights were traded to Edmonton from Columbus for the right to negotiate a contract), and another of those top-ten draft picks (Darnell Nurse). For Oiler fans who clung to the hope of what so many high-end draft picks might bring, the last few years have been bitter medicine. Here is how the teams compare in their numbers to date this season: 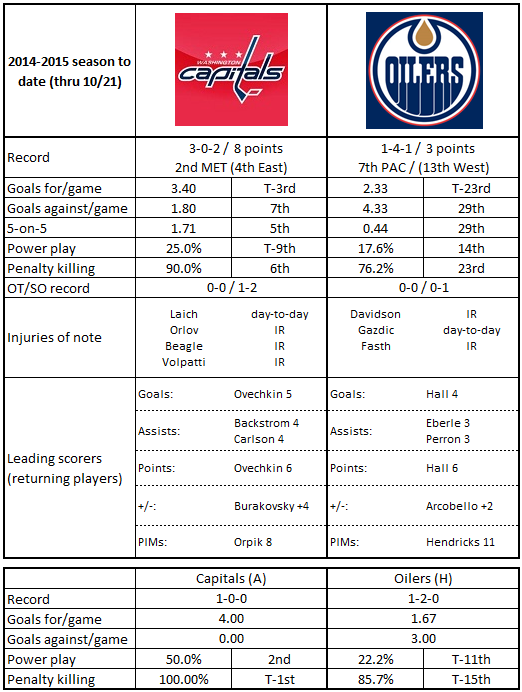 -- One thing Edmonton has going for it is consistency. The benefit here for Caps fans is that some of that consistency is not kind to the Oilers. So far, Edmonton has a goal differential of minus-3 in the first period of games, minus-3 in the second period, and minus-6 in the third period. They have been outscored overall, 26-14, in six games.

-- It’s bad enough to fall behind early in games often. It’s worse when you can’t win on those rare occasions when you do get ahead early. In six games the Oilers have scored first twice. They won neither game. They are one of three teams who have scored first in at least one game (Arizona has yet to do so) not to have won. Edmonton is 0-1-1, Philadelphia and Carolina both are 0-0-1. Geez, even Buffalo won the only game in which they scored first.

-- Only the Winnipeg Jets have fewer power play opportunities per game in the early going 2.80 per game) than the Oilers (2.83 per game). You might think that allowing only 3.50 power play chances a game (tied for 11th fewest) would help, but there is that 76.2 percent penalty killing to deal with.

-- Edmonton is still trying to settle on a lineup that works. They have dressed 22 skaters in six games. Only Boston (24) and the New York Rangers (23) have dressed more.

-- What a difference a year makes in terms of starts for the Capitals. Last year the Caps were 1-4-0 in their first five games and had to come back from three goals down to win in a shootout for their lone win. They were outscored, 20-12, and had a penalty kill of just 78.9 percent. Through five games this season the Caps are 3-0-2, outscored their opponents by an 18-9 margin, and have a penalty kill of 90.0 percent.

-- Starting well has been a theme for the Caps. They scored the first goal in four of their first five games and took a lead into the first intermission three times (tied once). The Caps are the last team in the Eastern Conference without a loss in regulation time and one of only three in the league going into Tuesday’s games (Nashville and Chicago are the others).

-- Seventeen of the 20 skaters to dress for the Caps have points through five games. Defenseman Nate Schmidt is the only player to have appeared in more than two of those games without recording a point (but he is a plus-3, tied for second on the team).

It seems like a long time ago that Taylor Hall was drafted first overall by the Edmonton Oilers. It was only just in 2010 that it took place, though. Four years since his selection, his skill is not in question. He is third in his draft class in goals (96, one behind both Tyler Seguin and Jeff Skinner), first in total points (231, 18 more than Seguin and 46 more than Skinner). He was the first of three consecutive number one overall draft picks for the Oilers (Ryan Nugent-Hopkins and Nail Yakupov being those next in line) and one of six straight top ten draft picks (and counting). By virtue of being the longest tenured in this chain (Marcus Paajaarvi, drafted 10th overall in 2009, is no longer with the Oilers), Hall is almost by default the go-to guy for ensuring success. He has not disappointed early. His four goals and six points lead the team, but unfortunately he has not led it very far, either early this season or over his four previous seasons with the club. At 22 (he will turn 23 in early November) the clock is not yet ticking on his career, but he is one of a collection of very skilled young forwards who have been unable to translate that skill into wins on the ice. He has faced the Caps only twice with a scoring line of 1-0-1, minus-3).

It’s back home for Jason Chimera, a native of Edmonton, who happened to be drafted by his hometown team in 1997 (5th round/121st overall). He played in four seasons with the Oilers, appearing in 130 games before he was traded to the Phoenix Coyotes in June 2004 in one of the busiest, if least consequential deals in recent history (Chimera and a third round pick for a second and a third round pick in 2004; of the three draft picks moved, only one yielded a player who appeared in an NHL game: Liam Reddox).  Of more recent relevance, Chimera, with one goal in five games, is getting off to roughly the same start he had last season (one goal in his first nine games), and the start he had in 2012-2013 (one goal in his first 40 games), and the start he had in 2010-2011 (three goals in his first 35 games). He is not the fastest of starters. Part of it is shooting; he has only nine shots on goal in five games. It’s early, of course, which means this is not a cause for worry, but it would be nice to see him breakout against the hometown team. In 20 career games against the Oilers, Chimera is 3-7-10, plus-4.

Going west is always an issue, it seems, for the Capitals. Last spring’s successful California trip is the exception. The Caps are 2-8-0 in their last ten trips to Edmonton, although they have won two of their last three contests at Rexall Place. The Oilers won their first game of the season on Monday, a 3-2 win over highly-regarded Tampa Bay, so they cannot be overlooked as the feckless group that went 0-4-1 in their first five games and that was outscored, 24-11.

Ben Scrivens has been sharp in goal in his last two outings, allowing only three goals on 53 shots (.943 save percentage) while splitting two decisions. What he has not had is much experience against the Caps, and not very effective experience, either. In two career appearances against Washington he allowed seven goals on 63 shots (.889 save percentage) in 119 minutes, splitting his two decisions. For the Caps, who going into Thursday’s games have the third best scoring offense in the league, it will be a matter of reminding Scrivens and the Oilers that their defense has been often as bleak as their winters. The Caps have not scored more than four goals in Edmonton since taking a 6-5 decision on October 23, 1991. We’re thinking it’s about time.