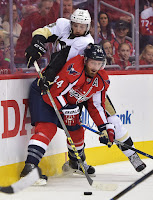 “In rivers, the water that you touch is the last of what has passed and the first of that which comes; so with present time.”
-- Leonardo da Vinci

If you last that long in the NHL without much of an offensive profile, you can’t be accused of shirking hard work at the other end of the ice and turning that hard work into results, usually of the sort that do not get a lot of attention.  First, how sparse is that offensive profile?  In 2016-2017, Orpik did not record a goal for the fifth time in 14 seasons and for the second time in three seasons in Washington.  With 14 assists, he had fewer than 15 assists for the tenth time in his 14-year career.  And, for the 13th time in 14 seasons, he finished with fewer than 20 points (14).

On the other hand, he recorded 2.3 hits per game, putting him in the top 35 of defensemen dressing for at least 40 games this season.  He had 1.7 blocked shots per game, putting him in the top third in that defenseman group.  While this might sound a bit modest, Orpik was the seventh-oldest defenseman to dress in the league this season.  And most of the others older – Mark Streit, Andrei Markov, Brian Campbell among them – have a larger presence in the offensive end of the ice, where the wear and tear on the body is not quite as acute.

As it was, despite averaging the lowest amount of ice time of his career (17:47) since 2007-2008, he did record more than 175 hits for the eighth time in ten seasons since the league started recording that statistic, and he recorded more than 125 blocked shots for the fifth time in those ten seasons. 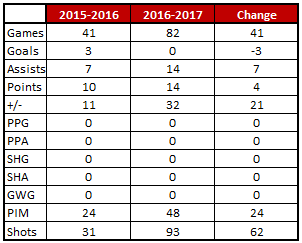 Cheerless’ Take…  Orpik has this weird possession thing.  He skated at least 50 5-on-5 minutes with six different defensemen, which by itself suggests either he is veteran enough to pair with anyone (or the team couldn’t find a consistent partner).  But looking at Corsi-for when together and when apart (numbers from stats.hockeyanalysis.com), it’s hard to say that one or another kind of defenseman is a good or bad fit.  He was 56.3 percent Corsi-for at fives with Nate Schmidt, but 44.8 percent with Dmitry Orlov.  Those two guys are sort of up-tempo, offensively oriented defensemen.  One thing you could say though… pairing him with Karl Alzner didn’t work.  They were 37.4 percent Corsi-for playing together.

Odd Orpik Fact… No player recorded as many shots on goal this season (93) without scoring a goal as did Brooks Orpik.  Next in line was Ottawa defenseman Marc Methot, who had no goals on 69 shots.

Brooks Orpik came into this season having faced the Philadelphia Flyers more often in the regular season (62 games) than against any other opponent.  When he took the ice against them on January 15th, it was the second time this season and 64th time in his career he faced the Orange and Black.  He skated just 16 minutes in the teams’ first meeting, a 3-2 Gimmick loss in Philadelphia on December 21st.  The return match in Washington was a different story.  The Caps used a four-goal third period to subdue the Flyers, 5-0, and Orpik contributed an assist on the fifth and final goal in the third period.  But his contributions in support of goalie Philipp Grubauer’s shutout were more at the other end of the ice.  In 21:43 of ice time, his second-heaviest workload on home ice this season, he had four hits and three blocked shots, one of only four games this season in which he had at least four hits and three blocks, and in 16:48 of ice time over the last two periods helped hold the Flyers to just 11 shots on goal (they had 24 for the game).

When you are a stay-at-home defensive defenseman, there are going to be times you get more ice time and times you get less, that that can be a function of how things go early in a game.  On March 6th, the Caps hosted the Dallas Stars, a team against which they have had a devil of a time at Verizon Center.  A team against which the Caps were winless in five straight on home ice (0-4-1).  Less than two minutes into the game, it looked like it would be 0-5-1 when Devin Shore put the Stars on top.  When Radek Faksa and Jason Spezza scored goals less than two minutes apart in the second period, it put the Caps in risk-taking mode on offense and that cut into Orpik’s ice time.  The Caps did make a game of it, getting pair of goals to draw within one, but Dallas scored an empty netter to put the game away in the last two minutes.  In the 4-2 loss, Orpik skated a season low 14:46 in ice time and had just 19 shifts, one of 12 games this season he had fewer than 20 shifts.   He sat the last 4:43 of the contest, and although he did record an assist, he had a relatively quiet two hits and one blocked shot as the Caps fell to 0-5-1 in their last six home games against Dallas.

The Caps had the challenge, and Brooks Orpik the misfortune, of playing speed teams in each of the first two rounds of the playoffs.  It took its toll on Orpik, who finished his postseason with his worst plus-minus in 11 trips to the playoffs.  He was a plus player in just one of 13 contests (plus-1 in the series clinching 2-1 overtime win in Game 6 against Toronto).  Perhaps reflecting the poor matchups his presence in the lineup afforded, his ice time diminished significantly as the postseason wore on.  He averaged less than 11 minutes over the last four games of the second round series against Pittsburgh.

It might be fair to say two things about Brooks Orpik.  One the one hand, he is one of the hardest working, most diligent players there is in terms of getting himself ready to play.  What else could one conclude for a player who, playing a rugged style at a demanding position, has been able to dress for 70 or more games in nine of his 12 full seasons in the NHL?  On the other hand, Father Time is tapping him on the shoulder.  Being a warrior for more than a thousand regular season and playoff games in the NHL takes its toll, and this is what folks might have had in mind when they thought that in his five-year deal signed with the Caps in 2014, he would be much more valuable in his first two or three seasons than he might be in the last two or three years of that deal.

Orpik, should he return to the Caps next season, is at the point in his career where he still has value, if his situations are managed actively.  The postseason revealed what might be a vulnerability to younger, faster skill players whose careers stretch out before them.  The best days of Orpik’s career are likely behind him, but what a body of work he has put together.  If he should depart, it would be unfortunate that the last memory of Orpik – what literally would be his last shift as a Capital – ended in fight against the Caps most frustrating rival in a series-deciding game that even he could not prevent from ending in another loss.