The Peerless Prognosticator is ON THE AIR!!! -- Game 41: Islanders at Capitals, December 31st

The curtain comes down on the 2019 portion of the season, and the Caps wrap up the first half of their regular season schedule when they host the New York Islanders on New Year’s Eve in a matinee matchup at Capital One Arena.  The Caps will be looking to extend their home winning streak to four games, one short of their season high, while the Islanders try to extend their own run of success on the road (4-1-0 in their last five road games). 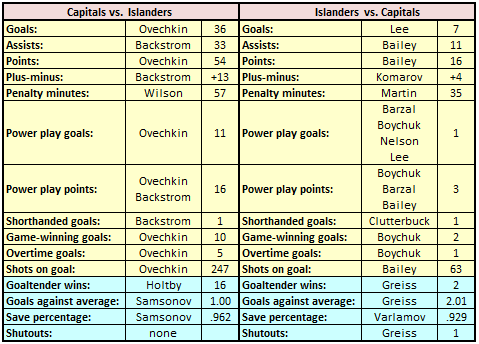 The Islanders are not a young team by today’s NHL standards.  At the start of the season they were the third-oldest, by average age, in the league, the average age of the roster being almost a year and a half older than the league average.  That makes Martin Barzal, the second youngest Islander to dress for at least five games this season (Anthony Beauvillier is 13 days younger) a critical part of the team’s present and future.  Barzal, who leads the team in goals in December (six), is already in his fourth season with the team at age 22.  The Calder Trophy winner as top rookie in his first full season (2017-2018) is on a pace to establish a career high in goals.  With 16 goals in 37 games he is on a pace to finish with 35, which would be well clear of the 22 he posted in his Calder-winning rookie season.  The odd part about his scoring line, though, is the lack of assists.  He had 17 in 37 games, putting him on a pace for 38 helpers, which would be a career low for Barzal.

If anything, he has picked his goal scoring a bit in recent games.  Over his last 14 contests he has seven goals (a 41-goal pace), but that comes with a 22.6 percent shooting percentage.  As a foundational component of the Islander attack, his contributions matter.  New York is 18-3-2 in the 23 games in which he recorded at least one point, 6-7-1 in the 14 games in which he was held off the score sheet.  Odd Barzal Fact… While he is not a prolific shooter (his 80 shots on goal rank fourth on the team this season), he is a consistent one.  Barzal has posted at least one shot on goal in 34 of 37 games overall, and only once – November 25th against Anaheim – did he fail to record a shot on goal in a road game.  Barzal is 1-4-5, minus-5, in 10 career games against the Caps.

Jordan Eberle sits square in the middle of the age range of the Islanders at age 29.  Unfortunately for the Isles, he does not occupy a similar position in the stat sheets so far this season, at least insofar as goal scoring is concerned.  After posting a total of 44 goals and 96 points in his first two seasons with the club after coming over from Edmonton in a trade for Ryan Strome in June 2017, Eberle has three goals in 27 games so far this season and has missed ten games to a lower body injury, his longest absence to injury since missing 13 games to a shoulder injury in 2015-2016.  His season started slowly with no goals in his first 14 games.  Then, after potting a pair of goals against Detroit in a 4-1 win to open December, he has only one goal in his last 12 games, although he is setting up others with nine assists in that span.

Eberle occupies an odd and obscure place in Capitals history.  He was taken 22nd overall in the 2008 Entry Draft by the Edmonton Oilers.  The Capitals passed on him with the pick immediately preceding that one, opting instead for Anton Gustafsson, who would become the second of three skaters taken in the first round that year not to appear in an NHL game (Kyle Beach, taken 11th overall by Chicago; and Daultan Leveille, taken 29th overall by Atlanta, were the others).  Eberle is second in his draft class in goals scored (212, to Steven Stamkos’ 407) and third in points (495, to 801 for Stamkos and 591 for Erik Karlsson). Eberle is 1-5-6, minus-9, in 18 career games against Washington.

At some point, one would think the Islanders are going to have to decide which of their goaltenders will be their number one netminder.  So far, though, that choice seems to have been pushed to the back burner.  The Isles have divided the starts almost down the middle so far, Semyon Varlamov getting 19 starts and Thomas Greiss getting 18 starts.  Varlamov’s numbers are slightly better, but not so much so that he has put distance between himself and Greiss in the race for number one.  His goals against average is better (2.40 to 2.58), but his save percentage (.920) is almost indistinguishable from Greiss’ (.919).  Varlamov has the only shutout posted by an Islander goalie this season, a 1-0 win over Buffalo on November 2nd.  What Varlamov has not done is lose, at least not often in regulation.  He has only three losses in regulation in 19 decisions (13-3-3), while Greiss had seven regulation losses in 18 decisions (11-7-0). 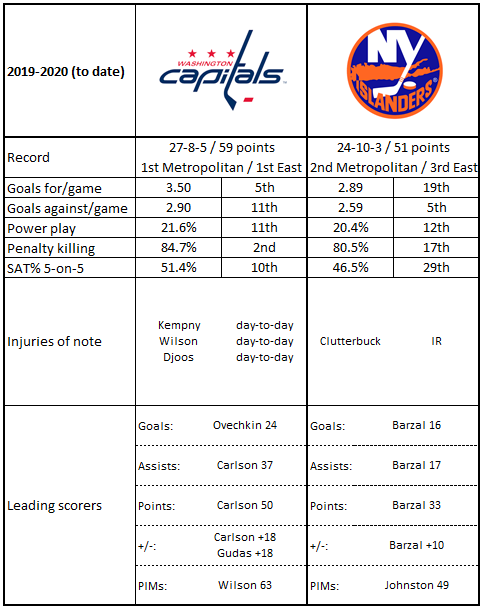 1.  Only the Caps have a better points percentage in road games this season (.750) than the Islanders (.639) among Eastern Conference teams.

5.  The Islanders have yet to lose a game on the road this season by one goal in regulation, one of four teams not to do so (New Jersey, St. Louis, and San Jose are the others).

2.  Washington has the second-best penalty killing rate in the league on home ice (88.0 percent, trailing only San Jose with 91.1 percent).

3.  Winning in the NHL when falling behind is tough, but the Caps are better than most in doing so.  The Caps and Boston are the only teams in the league ranking in the top-five in winning percentage when trailing after one period and trailing after two periods on home ice.

4.  Washington is one of five teams that has not yet lost a game in regulation when scoring first on home ice with a record of 6-0-3 (Toronto, St. Louis, Buffalo, and Dallas are the others).  No team has more wins when trailing first on home ice than the Caps (five, tied with Toronto, Calgary, Pittsburgh, and the Islanders).

If it seems that Johnny Boychuk has been in the league since before helmets were mandatory, it only seems that way.  If you need a frame of reference as to where his NHL career got its start, he was drafted by Colorado in the second round of the 2008 Entry Draft, 61st overall and two spots ahead of where the Caps selected Tomas Fleischmann, who last played in the NHL in 2015-2016.  Boychuk is in his 13th NHL season and will dress for his 700th NHL game as soon as Saturday in Toronto (he has 697 games played).  Later this season he is likely to become the 16th defenseman in Islanders history to dress for 400 games (he has 376 games played with New York).

Boychuk has never been a big offensive producer; he has only one season with more than 25 points, that coming in his first year with the Islanders in 2014-2015 (9-26-35).  But he has logged hard minutes, evidenced by the fact that in 12 seasons preceding this one he dressed for more than 70 games only four times.  In six seasons with the Islanders, Boychuk has missed 71 of 447 games, more than 15 percent of the schedule.

This season, Boychuk has missed only one game to date, but his minutes are down, perhaps a concession to the fact that he is the oldest defenseman on the roster by more than seven years at 35 years old (Nick Leddy is 28).  Odd Boychuk Fact… The Islanders have perfect records on the rare occasions when Boychuk did not record a credited hit (3-0-0) or a blocked shot (4-0-0).  He is 3-5-8, plus-2, in 34 career games against the Caps.

The development of defensemen is sometimes one requiring patience, but Jonas Siegenthaler is giving some signs that he might be a bigger offensive contributor than one might have projected.  As a rookie last season, he posted four points (all assists) in 26 games.  He opened this season with two assists in his first 17 games before recording his first NHL goal (against Vegas) in his 18th contest.  Less than three weeks later, he had his first multi-point game in the NHL, recording a pair of assists in a win over the Florida Panthers.  He went his next nine games without a point, but he is 1-2-3, plus-3, over his last five games heading into the contest with the Islanders.

If there is an odd feature about his game, it is in the difference between his home and road profiles this season.  He is more active in road games than home games to date.  In 22 road games he has skated 454 shifts, 100 more than he has recorded in 18 home games (354), and he is averaging more than 17 minutes per game on the road (17:13) compared to 15:57 per game on home ice.  He has been slightly more productive offensively on home ice, but not significantly so, going 1-4-5, plus-4, in 18 home games and 1-2-3, plus-5, in 22 road contests.  His goal on home ice is his only game-winner to date, coming in the Caps’ 5-2 win over Vegas on November 9th.  With another multi-point game, Siegenthaler would become the fifth Capital defenseman to hit double digits in points this season, matching the number they had last season.  In three career games against the Islanders he does not have a point and has a minus-1 rating.

With a win in regulation, the Caps would carry a ten-point division lead over the second-place Islanders into the new year.  How big would that be?  If the Caps were to win only half of the remaining points on their schedule (41 in 41 games), they would finish with 102 points.  The Islanders would need 51 points in their last 44 games to tie the Caps.  That would not be a pace far off the 51 points in 38 games they would finish with in the 2019 portion of the schedule.  A 28th win in 41 games would be the second highest win total for the Caps at the 41-game mark in team history, trailing only the 2015-2016 team that had 31 wins after 41 games.  We doubt the team thinks about such things, but it that would not diminish the accomplishment for this year’s club, and it would be especially welcome at the expense of a division rival.