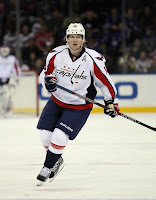 Theme: “I'm one of the boys, no better than the last second violinist. I'm just the lucky one to be standing in the center, telling them how to play.”
-- Eugene Ormandy

Since the 2007-2008 season only four NHL centers have recorded more than 300 assists: Henrik Sedin (380), Joe Thornton (338), Ryan Getzlaf (311), and Nicklas Backstrom (306).  But for the fact that Backstrom missed 40 games of the 2011-2012 season, he might rank second on that list, only behind Sedin.  Backstrom – the youngest of that quartet – has established himself as one of the best playmakers in the game.  It helps to have a finisher such as Alex Ovechkin, but Ovechkin also benefits from Backstrom’s skill.  That is the nature of the sport.

What Backstrom does not have are the accolades and awards that go along with such a level of accomplishment.  He has not been named twice as a first team NHL all-star or won a Hart Trophy, as Sedin has been.  He has not been named three times to the all-star team (once as a first-teamer) and won a Hart Trophy, as Thornton has done.  He does not have the Stanley Cup on his resume that Getzlaf has.  Backstrom was an all-rookie selection in 2007-2008 and Calder Trophy finalist, but that is the extent of his official recognition, despite the fact that he has the third highest active career assists per game, behind only Sidney Crosby and Evgeni Malkin.  He ranks 15th all-time in that category, ahead of such luminaries as Joe Sakic, Ron Francis, and Steve Yzerman.

On the eve of his seventh season in the league, his career is unfolding as did that of a fellow countryman, at least in terms of recognition and top-end performance.  Except for a remarkable third season in which Backstrom finished 33-68-101 in 82 games, he has been rather consistent at around a point per game (0.95, in fact, in his other five seasons to date).  He has done so in relative anonymity, at least compared to his flashier teammate, Alex Ovechkin, and his contemporaries at center, Crosby and Malkin.  It is not unlike the career fashioned by Mats Sundin over 18 seasons in which he had one monster season (47-67-114 in 80 games in 1992-1993) and was otherwise an almost freakishly consistent point-per-game player (0.98 points-per-game in his other 17 seasons).  Sundin never won any personal hardware and was named to the NHL second all-star team twice.

One would like to see better possession numbers from Backstrom and the top line.  Last season, among forwards playing in at least 20 games, Backstrom’s raw Corsi/on-ice value at 5-on-5 was unimpressive (139th among 395 forwards).  His individual Fenwick score was 131st among 208 forwards having played at least 500 minutes at 5-on-5.*

What Backstrom did not do as well last season as he had in any of his previous five seasons was score goals at even strength.  His 0.10 goals per game at even strength tied his worst season (2008-2009) in that regard (after rounding).  The issue here might be one of “puck luck.”  While his shots per game was down from his 2011-2012 season (from 2.26/game to 1.71), his shooting percentage dropped even more precipitously (from 14.7 percent to 9.8 percent).

He might not have been shooting so often or so well, but he was setting the table.  Those 0.52 assists per game at even strength was a career best.  Overall, he led the league in assists per game (0.83).  And, he was consistent.  Only once all season – and not at all in his last 43 games – did he go as long as three games without a point.  He registered points in 31 of 48 games overall.  We’ll bet you didn’t know that his career plus-94 is second best in Caps history.  Only Rod Langway (plus-117) has a better one.

One thing that seems to have dried up in his game is power play goal scoring.  Early on in his career he was a threat; he had a total of 25 power play goals the 2008-2009 and 2009-2010  seasons.  He has only a total of ten power play goals over 167 games over the last three seasons.  Last season the low total (three, tied for fifth on the club) might have been a product of how he was deployed, generally along the right wing half wall on the Caps’ power play.  He was less a goal-scoring threat from there than he was the trigger man, starting plays for the best power play in the league.

The Big Question… As Backstrom embarks on his seventh season in the league, does he have another gear in him?

There is that outlier of a season, though.  In 2009-2010 Backstrom finished 33-68-101 in 82 games.  Given that it was his third season, the three years representing consistent improvement (69 points in his rookie year to 88 to 101), folks might have been forgiven for thinking that 100 points was going to be the new normal for Backstrom.  However, career bests are career bests, and that 2009-2010 season might end up being Backstrom’s.  But there was a tantalizing stretch of games last year to suggest that if Backstrom isn’t a 100-point player, he can be a 90-point player.  Over the first half of last season he was 3-18-21, plus-1.  However, over the last 24 games he was 5-22-27, plus-7.  Those 27 points would be a 92-point pace over an 82-game season.  Having now had a full year under head coach Adam Oates, can he put that kind of full season together?

There is not even the hint of debate this season about Backstrom’s role with the Caps.  Unlike last season, when one might have conjured visions of Mike Ribeiro centering Alex Ovechkin (which he did for a time), Backstrom is the number one guy once more, the guy who will be called upon to set up Alex Ovechkin and whoever it is that occupies the left wing.  But setting up others is not the entirety of his job description.  Since he recorded a career high 33 goals in 2009-2010, he has 40 goals in 167 games.

If Backstrom is to take that next step back up the scoring ladder and assert himself as one of the elite centers in the league, it is likely it will manifest itself at even strength.  Only once has Backstrom been among the top-ten point producers among centers at even strength, that being in his career 2009-2010 season (third in overall points among centers).  It would not likely take much… shooting a bit more frequently, being a bit more efficient when he does, perhaps some more production from Marcus Johansson converting Backstrom feeds.  These could be helped by improvements in his possession numbers.

In the end, what does that mean for Backstrom for the 2013-2014 season?  Well, it means that he is, in a sense, one of the boys.  Part of it is the nature of his position.  He has to blend in, to make others around him better.  But as the center he is the one driving play, the conductor of the offense.  This year he steps up.

Posted by The Peerless at 3:23 AM No comments:

Countdown to Opening Night by the Elements: Number 30

Zinc has been around for a long time.  OK, it’s “been around” a lot longer than people have, but our point is that it has been used by people for a long time, at least 3,000 years when it was used as a an alloy with copper (brass) in the eastern Mediterranean region of the world.  It did not take on its current name until the 16th century when the German alchemist Paracelsus referred it as “zinken,” a word meaning “pointed” or “jagged,” and referring to zinc’s appearance.

While its oldest use has been in the manufacture of brass, its most widespread use might be broadly characterized as protection.  The process of galvanization involves applying a zinc coating to iron or steel to prevent rusting.  It is used in rubber manufacture to protect it from ultraviolet radiation.  It is used as an additive (as zinc chloride) to lumber as a fire retardant and preservative.

Zinc is an essential biological element, necessary for the functioning of more than 300 enzymes.  It is critical to immune function, protein synthesis, wound healing, taste and smell, and growth.  According to the Mayo Clinic…

"Based on available scientific evidence, zinc may be effective for the treatment or management of a number of conditions, including diarrhea in malnourished children, skin conditions (such as acne vulgaris, eczema, and psoriasis), gastric ulcers, attention-deficit hyperactivity disorder (ADHD), immune disorders, sickle cell anemia, leg ulcers, infertility, Wilson's disease, herpes, taste or smell disorders, diabetes, and diabetic neuropathy. Zinc has also gained popularity for its use in the prevention of the common cold."

Zinc is a ubiquitous and essential element that has an amazing range of applications in promoting health, and in physical and biological protection and defense.  One might like a defenseman with this kind of range of defensive capabilities.

Zinc… the “Karl Alzner” of the periodic table of the elements.

Posted by The Peerless at 12:40 AM No comments: