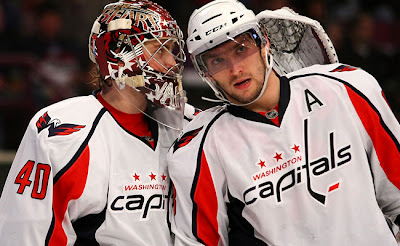 Seems as if the Capitals Season Ticket Holder outing is being rescheduled in anticipation of inclement weather expected tomorrow.  One drawback of the change in schedule is that Capitals Alex Ovechkin and Semyon Varlamov will not be able to attend, as they will be in Bristol, CT, to film a "This Is SportsCenter" ad for ESPN.

There is a sense of anticipation about the filming, having read in a couple of places already that while no details can be divulged, it will be a great ad.  It gets us to wondering just what sort of ad these two wacky kids might be filming...

-- Ovechkin's head on a studio desk cackling at a forlorn Varlamov sitting in the anchor chair, "AH-hahahahaha...only fat chicks in Connecticut!"

-- Varlamov and Ovechkin in John Buccigross' office teaching him how to say, "Sidney Crosby sucks" in Russian.

-- Ovechkin in a cubicle ordering two dozen pizzas to be delivered to Chris Berman's office... "and your name, sir?"  "Ron Jaworski."

-- Varlamov and Ovechkin standing in the middle of the ESPN reporters' bullpen and shouting at the top of their lungs..."Versus is sick, ESPN sucks!!!"

-- Ovechkin and Varlamov on ESPN radio set with bobbleheads of NHLers all around, opening their new show... "Ovi and Varly in the Morning."

-- Varlamov and Ovechkin on glass and chrome TV set, getting last make up for new show, "Pardon the Russian (Accent)."  Varlamov looks into the camera, waves flag while saying, "Good Night Russia."

-- Ovechkin walking down corridor, arm around PTI's Mike Wilbon... "so, you think Crosby is better hockey player?"  Varlamov peeks around the corner, "Ovi, don't listen to him, he's a basketball writer."

OK, so the ad has to be better than this.
Posted by The Peerless at 1:44 PM 3 comments:

Yesterday, the Islanders’ James Wisniewski was called to pay the piper for his performance art display in Monday’s 6-4 win over the New York Rangers. The Islander defenseman was given a two-game vacation by the league office for his “gesture” toward the Rangers’ Sean Avery. 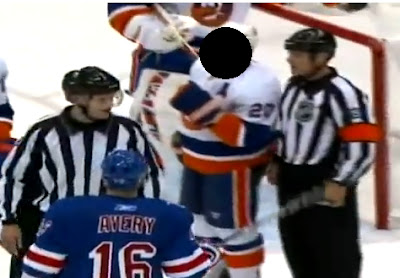 Unless you have been living under a rock since Monday afternoon, you know that with about five minutes left in the first period, Islander goalie Rick DiPietro covered a loose puck in the Islander crease. Avery, never one to let the chance pass to do something cheap, decided it would be a good idea to skate in and give Ricky D a little ice spray for his trouble. Wisniewski took offense and stepped up on Avery. As the two were being separated, Wisniewski expressed his opinion of Avery’s stunt in rather graphic terms that would make the reader of a family blog such as this blush.  Or so the story goes.

But frankly, we are wondering if Wisniewski’s gesture was misinterpreted. There is any number of possible explanations for Wisniewski’s actions…

-- He was expressing solidarity with the Chilean miners who had been trapped underground for two months, and he was demonstrating the drilling technique used to save them.

-- In arguing with Avery, perhaps he heard Avery remark that it was “music to his ears,” and Wisniewski was demonstrating how he might perform on the “oboe.”

-- Wisniewski was reminding Avery that they would meet again just after the close of Dental Assistant Recognition Week next March, and he wanted to remind Avery to attend to his oral health.

-- Avery was inquiring as to the proper method of consuming a popsicle.

-- Wisniewski was mimicking a singer holding a microphone while performing the title song from the famous musical, “Oklahoma!”

Today, Wisniewski serves the first of his two-game suspension by the league. We are going to guess this takes him out of the running for the Lady Byng Trophy.

But we’re thinking a lot of players harbor a belief that he merits consideration for the Hart Trophy for expressing precisely what they think of Manhattan’s Bad Boy.
Posted by The Peerless at 7:28 AM No comments:

Email ThisBlogThis!Share to TwitterShare to FacebookShare to Pinterest
Labels: the peerless prognosticator, things that make you go 'hmm...'

The Peerless Prognosticator is ON THE AIR!!! -- Caps vs. Islanders, October 13th

Tonight the Caps look to add to their modest two-game winning streak as they host the New York Islanders at Verizon Center. If you haven’t been following, the Islanders, picked by few (their wives, kids, Charles Wang) to make the playoffs, have yet to lose a game in regulation. Yes, it’s only two games (1-0-1), but for a club that finished 13th in the Eastern Conference and went undefeated in their first two games only once in the last seven years, this is an achievement. But this is a team that will be fishing for wins all season, too…

“You have a problem with fish?”

“You’re not going to make any jokes about the Gorton’s Fisherman uniforms they had, are you?”

It hadn’t crossed my mind. What’s your name, if I might ask?

I see, and you’re a hockey fan?

Then what are you doing in Washington? This isn’t exactly the Flemish Cap.

“It’s that infernal Mrs. Paul. She’s always trying to get me to come to her place to try her ‘fish sticks.’”

“No, she has too much ‘batter’ on them, if you understand my meaning.” 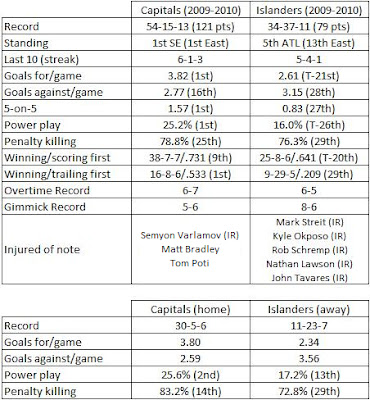 Well, if the Islanders are looking for offense they could start with Matt Moulson, who led the Islanders in goal scoring last year with 30. It was a coming-out party for the former ninth-round draft pick (Pittsburgh, 2003). Until last season’s blossoming, Moulson played only 29 NHL games (spread over two seasons with Los Angeles) and recorded a total of six goals. In four games against the Caps last year (the only times he has faced them) Moulson recorded a goal and was “even” in almost 17 minutes of ice time a game.

Blake Comeau might be asked to step up in a big way to help fill the void, and you could say he has done just that in the first two games for New York. After notching a goal in the Islanders’ opener against Dallas, he potted two (including the game-winner) against the Rangers on Columbus Day. What is more, he contributed more than 20 minutes of ice time in each game. That he would produce is not necessarily a surprise. Last season he recorded 17 goals in only 61 games at right wing, but it was quite a jump from his previous two seasons in which he scored a total of 15 goals. In two games against the Caps last season he had an assist and was a minus-3 in two games. That happens to be the only point he has in nine career games against Washington.

Josh Bailey is tied for the team lead in scoring (four points, with Comeau) and at 21 still has considerable upside to be tapped. He was 16-19-35, plus-5 in 73 games last year (led the team in plus/minus) and was the only Islander to record both a power play and a shorthanded goal last season. Against the Caps last season he had an assist in four games and was a minus-2 (that would be the only point he has in eight career games against the Caps).

With Streit out of the lineup and James Wisniewski (their big minutes eater from the blue line) taking a seat in the corner for a couple of games for not playing nice with others, the Islanders are going to rely heavily on Mike Mottau, who comes to Long Island after three solid years in New Jersey, and a collection of journeymen. Radek Martinek, Mark Eaton, and former Cap Milan Jurcina bring more than 1,200 games of NHL experience to the Islanders, but none of them can be reasonably thought of as more than a third-pairing sort of defenseman at their respective stages of their careers. With Streit out of the lineup, only two defensemen – Andrew MacDonald and Martinek – dressed for the Islanders last year, and they did so for only a combined 62 games. This is likely to be a defense of the mix-and-match variety.

That is going to put more than a little pressure on goaltender Rick DiPietro, who was the Islanders goaltender in each of the first two games. Starting the first two games of the season is an achievement for DiPietro, who hasn’t started the first two games of a season since the 2007-2008 season, and who has appeared in 13 games in the last two seasons combined coming into this season. What the Islanders are hoping for is a return to something approaching the 32 wins, 2.58 goals against average, .919 save percentage, and five shutouts of 2006-2007. Anything would be an improvement on the 3-8-1, 2.92, .897 he posted over the past two abbreviated seasons.

Doug Weight is the oldest player on this squad by more than five years. He is coming off a year in which he appeared in only 36 games because of injury. He has skated just over 20 minutes in each of the Islanders’ games thus far and has a 1-2-3 scoring line to show for it. With Okposo out, Weight is being asked to assume a larger share of the scoring load and take a little more ice time than one might have expected of a player who will turn 40 in January. Last year against the Caps he was 0-1-1, minus-3 in two games and is 4-23-27 in 34 career games against Washington.

You could make the argument that of all the teams Nicklas Backstrom faced last season, he had the least success against the Islanders. Four games, three assists (none at even strength), minus-4. He is 2-7-9 in 12 regular season games in his career against the Islanders. Backstrom has yet to register a point for the Caps in three games so far this season, the first time in four career seasons he has finished his first three games in such fashion. You have that kind of convergence of bad results, and it is just the sort of thing that fairly speaks “big night” in the offing for Backstrom.

1. Patience. The Islanders are more than the sum of their parts. Individually, this was a roster that should have challenged for the 30th spot in the standings last season. But they did finish 17 points out of the cellar. What they lack in talent they make up for with an ability to frustrate clubs with their work ethic. The Caps need to be patient and match the Islanders’ compete level.

2. Play up, not down. We’ve said it before – sometimes the Caps can play to their opponent’s level. In playing a club like the Islanders that can make for some ugly looking hockey. The Caps need to play up to their own level of skill.

3. Kill, kill, kill. The Caps have not yet allowed a power play goal. Half of the Islanders’ ten goals have been scored on the man-advantage (second in the league at 38.5 percent). Those five power play goals have come from five different players, and only mime-talent James Wisniewski will not be in the lineup among those goal scorers. The Caps cannot take the Islanders lightly when the visitors are on the power play.

In the end, this game is all on the Caps. The Islanders are depleted, and even if icing a full and healthy squad cannot match the Caps in skill. This is one of those games in which, if the Caps stand on the Islanders’ throats early, is over by the second intermission. It is also one of those games chock full of land mines, because if last year is an indication (the Isles earned points in three of the four games) New York will be more difficult than their standing would suggest.