The Peerless Prognosticator is ON THE AIR!!! -- Game 31: Capitals at Flyers, December 21st

For the first time this season and the 208th time in the respective histories of the teams, the Washington Capitals and Philadelphia Flyers will meet on the ice, this inaugural edition of the 2016-2017 series to be played In the City of Brotherly Love on Wednesday night.  Both teams will be coming off losses, the Caps having their six-game winning streak snapped by the Montreal Canadiens, 2-1, on Saturday night, while the Flyers dropped a 2-1 trick shot decision to the Nashville Predators, their second straight loss since putting together a ten-game winning streak of their own, tied for third longest in club history.

The Flyers’ ten-game winning streak was largely fueled by forward Jakub Voracek, who went 4-12-17, plus-6 during the streak and posted consecutive four-point games (a 6-5 win over the Edmonton Oilers and a 4-2 win over the Dallas Stars in what are the most recent home games for the Flyers).  The surge has lifted Voracek into a tie for third place in the league points rankings (34), trailing only Connor McDavid (40) and Vladimir Tarasenko (38).  If there is an odd fact attached to Voracek’s streak and his scoring in general, it is that despite the fact that he recorded points in eight of the Flyers’ ten straight wins, the Flyers are just 12-5-2 in the 19 games in which Voracek has recorded a point this season, 6-3-1 in his multi-point games.  In 25 career games against the Caps, he is 11-7-18, plus-5.

Defenseman Shayne Gostisbehere’s sophomore season has not been the uninterrupted progress of success his rookie season was.  After finishing second to Artemi Panarin in last season’s Calder Trophy voting for the league’s top rookie for a team reaching the playoffs, he and the Flyers got off to a slow start this season.  For Gostisbehere is was not so much his offense as his defense.  In his first 17 games he was 3-7-10, not far behind his points-per-game pace last season.  However, he was a minus-4 in those 17 games, and he was inching deeper into head coach Dave Hakstol’s doghouse.  Finally, Hakstol banished Gostisbehere to the press box for a game, a 5-2 win over the Winnipeg Jets on November 17th.   Whether his defense has improved is an open question, given that he is 1-5-6, minus-2, in 15 games since his benching, and he missed a game in that stretch on December 11th against the Detroit Red Wings with a hand injury.  Gostisbehere is 0-3-3, even, in three career games against Washington.

It might be hard to believe that in this, the 50th anniversary season of Flyers hockey, they have had just four goaltenders appear in at least 200 games for the club.  Steve Mason became the fourth member of that club in his last appearance, the 2-1 Gimmick loss to Nashville last Saturday (the others are Ron Hextall (489), Bernie Parent (486), and Doug Favell (215)).  And when you have been around that long, weird things happen.  Take Mason’s during and after phases of the Flyers’ ten-game winning streak.  Mason got the call eight times during that streak and went 8-0-0, 2.33, .926.  Very good numbers, indeed, although not extraordinary, but for the wins.  In the two games – both losses – he has played since the streak, he allowed just three goals on 58 shots, a .948 save percentage.  In 16 career games against the Caps, Mason Is 8-5-2, 2.71, .908, with two shutouts. 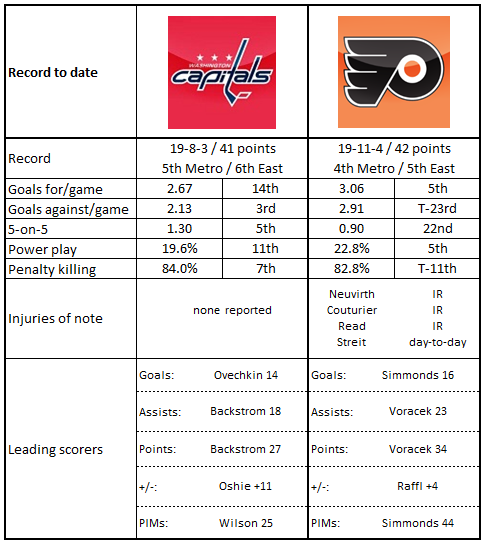 2.  Winning and losing often takes place on the margin in the NHL.  In the Flyers’ ten-game winning streak, six games were decided by one goal, four of them in extra time.  Two other wins featured empty net goals, effectively leaving the Flyers with eight “one-goal-ish” decisions in their ten wins during the streak.

3.  As one might expect, the Flyers rank high in one-goal games.  With 20 such decisions (11-5-4), they trail only the Chicago Blackhawks and Carolina Hurricanes (21 apiece) in one-goal decisions so far this season.

4.  Outshooting opponents does not pay off well for the Flyers.  In 19 games in which they outshot opponents this season, they are just 9-8-2.  When outshot, they are 10-3-2.

3.  That special play success applies to penalty killing, too.  Washington is 11-3-1 when shutting out opponents on the power play, 8-5-2 when they do not.  They are 10-0-0 when scoring a power play goal and shutting out their opponent on the man advantage, but that should not be all that surprising.

5.  Washington continues to be a good possession team on the road, ranking fourth overall in Corsi-for at fives away from Verizon Center (52.58 percent; numbers from Corsica.hockey).

“When the best player in the world comes up to you and tells you, ‘I don’t know who you plan on starting tonight, but I want that first shift.’ That says everything you need to know about Claude Giroux right there.”  Best player in the world?  That’s a lot to live up to, even if you are Sidney Crosby.  The thing is, that line was uttered by then-Flyers head coach Peter Laviolette back in 2012, just after Giroux' Flyers disposed of Crosby’s Penguins in the postseason.  Since then, however, Giroux has been a very good player, averaging 25-53-78 per 82 games, but he does not have a 30-goal season, and only once did he top 75 points (for the record, Crosby has two 30-goal seasons and three seasons with more than 80 points since then).  Giroux does remain one of the better players in the game, though.  While not in the class of Crosby or Connor McDavid, he does rank in the top dozen point getters this season (30) and is on a pace to finish with 72 points this season.  He was a key ingredient in the Flyers’ ten-game winning streak, going 5-7-12, plus-10.  In 29 career games against the Caps, Giroux is 15-16-31, plus-1.

Shayne Gostisbehere has the nickname, “Ghost,” for the Flyers, a play on his last name.  Lars Eller might have that nickname for the Caps for his being hard – at times impossible – to see on the ice.  His top end numbers are not particularly impressive, even for a third-liner: 2-2-4, minus-5, in 29 games.  That minus-5 is tied for worst on the club (with Justin Williams), and he is 18 games (and counting) without a goal.  His two goals and four points in 29 games are far behind his career-low goals and scoring pace (seven goals and 17 points in 77 games for Montreal in 2010-2011).  However, his possession numbers are outstanding.  He leads all Caps with at least 100 5-on-5 minutes in individual Corsi-for (58.14 percent), and among forward lines with at least 20 5-on-5 minutes together, Eller is a member of the top two combos (Eller, Williams, and Brett Connolly with a 65.62 percent Corsi-for in 33 minutes; Eller, Connolly, and Daniel Winnik with a 64.71 percent Corsi-for in 26 minutes; numbers from Corsica.hockey).  He is 1-4-5, minus-11, in 21 career games against the Flyers.

“Brotherly love” has hardly been a hallmark of this series, especially in Philadelphia, where the Caps have a record of 34-60-6 with six ties in the history of this series.  Worse, the Caps have lost five of their last six games in Philadelphia.  An odd feature of this series in Philadelphia since the Caps beat the Flyers, 7-0, back on November 1, 2013, a game in which the teams combined for 164 penalty minutes and included a goalie-on-goalie fight, is that the teams have combined for just 209 penalty minutes in six games since and only 86 in their last four.  Not that they will be exchanging holiday gifts at center ice in this game, but two teams with this recent penalty history against one another and their league rankings (17th and 18th in minor penalties taken) is an odd feature of this series and something to watch for.