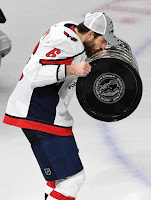 “If you do not change direction, you may end up where you are heading.”
-- Lao Tzu

Michal Kempny’s hockey journey until this season was not especially notable.  He came up through the ranks in his native Czech Republic, represented the Czech Republic in a variety of international tournaments, went undrafted by the NHL, and eventually moved on to Avangard Omsk in the Kontinental Hockey League where he played in 59 games in 2015-2016.  In May of 2016 he signed as a free agent with the Chicago Blackhawks.  He was 25 years old.

Kempny appeared in 50 games for the Blackhawks in 2016-2017, posting modest numbers (2-6-8, plus-1) in the regular season and dressing for one game in a four-game sweep at the hands of the Nashville Predators.  In 2017-2018 he appeared in just 31 of the first 59 games on the Blackhawks’ regular season schedule, 27 of his 28 scratches of the “healthy” variety (he missed a game in November to illness).

Then, he was traded to the Washington Capitals for a conditional third-round pick in the 2018 entry draft (one of the most well-traveled draft picks in recent NHL history, originally a Toronto Maple Leafs’ pick, then the New Jersey Devils’ (as compensation for the Leafs’ signing Lou Lamoriello as general manager), then Washington’s (for Marcus Johansson), then Chicago’s (for Kempny), then Arizona’s, and finally to San Jose, who took Swedish center Linus Karlsson).

Kempny did not have an auspicious start with the Caps.  In his first 17 games with the Caps, Kempny went 0-0-0, minus-4.  But there was another number of relevance: 16:27.  That was his average ice time over those 17 games, almost three minutes more per game than the defenseman he ostensibly replaced, Madison Bowey (13:43 average ice time in 51 games).  He recorded two goals and an assist in his last five regular season games, averaging 17:44 in ice time over that span.  One could reasonably conclude that as Kempny worked his way into a comfort zone with the Caps, the team’s fortunes improved.  Washington was 12-3-0 in their last 15 games with Kempny in the lineup. 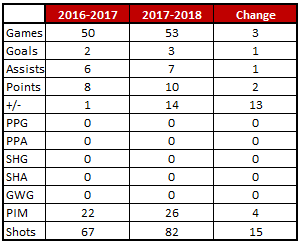 Fearless’ Take… Michal Kempny developed a chemistry with John Carlson on the second pair for the Caps.  He averaged 16:15 in even strength ice time in his 22 games to end the regular season, fourth highest among Caps’ defensemen.  Those last five games, the ones in which he recorded his only regular season points for the Caps, cemented his spot.  In none of those five games did he skate less than 16 minutes after skating less than 16 minutes six times in his first 17 games with the club.  In his 22 games to close the regular season, Kempny had the best shot attempts-for percentage in close situations at 5-on-5 (51.98 percent).

Cheerless’ Take… Five Caps defensemen played in more than a dozen of those last 22 games, Kempny being one of them.  He had the worst ratio of takeaways-to-giveaways among them (0.25:1).  And, he was a plus player in only four of his first 21 games with the Caps.

Odd Kempny fact… A more active Kempny in the offensive end was not all that great a thing in one respect.  In the 12 games in which he recorded at least two shots on goal, the Caps were just 6-6-0.

Michal Kempny toiled in relative obscurity in his brief NHL career in Chicago and Washington.  That changed in the Caps’ last regular season game of the season.  Until he took the ice against the Devils on April 7th, Kempny had not recorded a point in three previous career games against New Jersey.  He had just one point as a Capital in 21 games, the Caps’ only goal in a 4-1 loss to the Carolina Hurricanes on March 30th.  The Caps opened up a 2-1 lead in the first period of this game on goals by Alex Ovechkin and Nicklas Backstrom wrapped around a goal by the Devil’s Nico Hischier.  Early in the second period, the Caps restored their two-goal lead when Kempny struck.  He made the play possible by subduing a bouncing puck at the Devils’ blue line, then sending it deep behind goaltender Cory Schneider.  Chandler Stephenson took control along the right wing wall, and then he backhanded a pass to Shane Gersich circling through the right wing faceoff circle.  Gersich fought off a check from Brian Boyle and slid the puck back to Kempny whose shot from the top of the zone eluded Schneider on the glove side at the 3:44 mark of the period.

New Jersey would tie the game on a late second period and an early third period goal, but three minutes after the Devils tied the game, Ovechkin put the Caps back in front.  Mid-way through the period, Nicklas Backdstrom found Kempny drifting down through the left wing faceoff circle.  Taking the pass at the faceoff dot, Kempny glided down to the bottom of the circle and sent a pass to Andre Burakovsky in the low slot.  Burakovsky snapped a shot past Schneider’s blocker, and the Caps had an insurance goal in a 5-3 season-ending win.  It was Kempny's first multi-point game as a Capital.

Michal Kempny was not around for the first three games of the season series against the Philadelphia Flyers, the Flyers having won two of those first three games. He was there for the finale of the season series, and he got to experience the frustration his teammates did at the hands of the Flyers this season.  After a scoreless first period, the home team broke on top early in the second on a Shayne Gostisbehere goal.  Alex Ovechkin tied the game in the 16th minute of the period, but the Flyers scored a pair of goals in the last two minutes of the period to take a 3-1 lead to the third period.  The third period was a bit more wild, the Flyers outscoring the Caps, 3-2, to take a 6-3 decision.

For Kempny it was a forgettable effort.  In 12:31 of ice time, his lowest in 22 games with the Caps, skating only one shift in the last six minutes, that coming in the last 38 seconds after the Fliyers scored an empty net goal for the final margin.  He had a team worst three giveaways and was a minus-2, his worst plus-minus for any of those 22 games.

Postseason… Last season with the Chicago Blackhawks, Michal Kempny appeared in one postseason game, skating less than nine minutes without a point in the Blackhawks’ Game 4 elimination loss to the Nashville Predators in the opening round.  What a difference a year makes.  It started roughly for Kempny, who skated only five shifts and barely four minutes in Game 1 against Columbus before he was boarded by the Blue Jackets’ Josh Anderson, earning Anderson a major penalty and a game misconduct, and sending Kempny to the locker room for the duration of the contest, a Columbus 4-3 overtime win.

Kempny returned to the lineup for Game 2, going on to play in all 24 postseason games for the Caps.  Logging big ice time numbers was tough on him and the Caps, the team going 2-4 when he skated more than 20 minutes, but in the sweet spot, when he skated between 15 and 20 minutes, the Caps were 13-2, and he was 2-2-4, plus-5.  He had a goal and two assists in the final against the Vegas Golden Knights.

For the tournament as a whole, Kempny played in all 24 games and was third among Caps defensemen in blocked shots per game.  And he was tighter with the puck, charged with only eight giveaways, second fewest among Caps defensemen appearing in more than two games (Brook Orpik: five).  He did have his own run in with the law during the postseason, getting fined the maximum for a cross-check of the Tampa Bay Lightning’s Cedric Paquette in Game 2 of the conference final.

Michal Kempny provided the glue on the back end that the Caps needed to make a deep playoff run.  It did not show up in big offensive numbers, but he logged quality minutes, and when playing within the limits of his role – second pair minutes at even strength – the Caps were a very successful team.  It was a case of player finding a good match of team.  He credited then associate coach Todd Rierden (now head coach) with bolstering his confidence and expressed the opinion that he definitely wanted to remain in Washington.

Kempny signed a four-year/$10 million contract with the Caps in late June to do just that.  He is now one of three Caps defensemen locked up through at least the 2021-2022 season (John Carlson, through 2025-2026; and Dmitry Orlov, through 2022-2023, being the others).  He will give the Caps a measure of stability on the back line, a product of his age (he will be 28 in December) and experience (213 games in the Czech league), yet without a lot of NHL wear and tear (128 regular season and playoff games).  But his 2017-2018 season, and the change in direction from Chicago to Washington, was what made all the difference.