We’re closing our preview of defensemen by asking a question…which prospect is most likely to stick with the team come opening night? The possibilities…

What’s his claim? WHL Player of the Year, CHL Defenseman of the Year, Team Canada captain for the 2008 World Junior Hockey Championship. 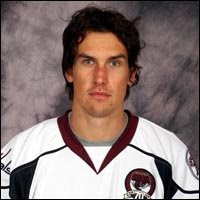 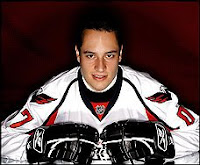 What’s his claim? He was eighth among OHL defensemen in scoring (17-34-51 in 60 games) and finished +31, a substantial improvement over the previous year (minus-2).

Feerless’ Take: Alzner clearly has the inside track of this group. He’s done everything he can do in juniors, and in the prospect camps in which he’s participated, he’s looked like a veteran compared to the other hopefuls. Realizing he’s never played a shift at NHL speed, he looks to be rarely out of place and seems to make the right decisions at the right times. He’s not flashy, but he’s got “cornerstone” written all over him for the next 12-15 years.

As for Lepisto, he had a fine year at Hershey, which argues for his getting a long look. He’s added some bulk, which he clearly needed to do when he was drafted, so perhaps he won’t be prone to abuse as much at this level. He gave a good account of himself in his cup-o’-coffee with the club last year, but seven games isn’t a six month season, either. You’d have to think he’ll be in Hershey (probably on the top pair) on opening night.

Godfrey has that booming shot, but that +31 stands out as a signal of maturity, too, that he’s taking both ends seriously. He’s a long shot to make this club out of camp; it would seem to be a function of others playing off the team more than him onto it that will be the factor. And Alzner doesn’t impress us as being the sort to play himself off of a team.

Cheerless’ Take: None of these guys are ready. It’s always easy to overrate the guys you’ve seen or that are in your own organization, especially since you’re not a scout, cuz. Since 2000, 16 defensemen have been selected in the top ten overall picks in the entry draft. Two of them – Rostislav Klesla and Jay Bouwmeester – saw action in their first year with their club after being drafted. Another eight saw NHL action in their second year. But here is the thing; through that second year, only Bouwmeester, Joni Pitkanen, Mike Komisarek, and Erik Johnson saw more than 10 regular games in a season with their respective clubs. It doesn’t seem to argue for a long stint with the Caps this year for Alzner, despite his pedigree. As for the others, Lepisto could be an injury call-up (for that matter, so could Alzner) from Hershey. Godfrey is a ways off yet.

The Peerless’ Take: At the moment, the Caps have six roster spots for defensemen encumbered: Mike Green, Shaone Morrisonn, Tom Poti, Milan Jurcina, John Erskine, and Jeff Schultz. If Brian Pothier were to suddenly get healthy, that’s a seventh position. There is a roster spot available, assuming Pothier’s health does not improve sufficiently (one, since the Caps are on record as having traded Steve Eminger because carrying eight defensemen is tough on the players). Many would like to see the Caps trade for a defenseman to give the blue line a bit more grit. The current state of the salary cap argues against that. So, there is an opening that a prospect defenseman can skate through.

Alzner will be the early favorite to make that leap. But in doing so, it is a reflection of the state of the “rebuild” (we know, it’s supposed to be over). Alzner, not to mention Lepisto or Godfrey, would be well served with getting 70-80 games of experience at Hershey, where they could log a ton of minutes in a lot of different situations. One of these guys getting third pair minutes or being the odd suit in the press box on many nights will not do much for their development. If this was to work out nicely and cleanly, Alzner (or Lepisto) might get ten or so games at this level this year, the rest in Hershey. This would be consistent with the experience of a number of top-ten drafted defenseman this decade – Jack Johnson, the late Luc Bourdon, Brian Lee. It might have been the pattern for the likes of a Dion Phaneuf, Braydon Coburn, or Ryan Suter – all members of the class of 2003 – had there been a 2004-2005 season.

Of the prospects, Alzner would be the favorite. But we have a suspicion that there is one more deal to be made before opening night. As hard as it is for defensemen to move via trade these days, we think that something along those lines will happen.
Posted by The Peerless at 1:35 PM 2 comments:

The cousins ran out of beer, and were off collecting empties to finance their next purchase, so we’ve been out for a few days. But now, we come to… 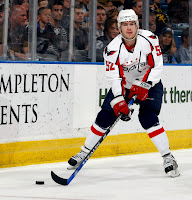 
Fearless’ take: Let’s start with this…Mike Green has played a total of 174 regular season NHL games. Of the top ten scorers among defensemen in the league last year, Green finished the year having played the fewest career regular season games (next fewest – Mark Streit: 205), and he was the youngest (Dion Phaneuf is 185 days older). What’s more, he was 15-34-49, +14 in the last 61 games of the season under coach Bruce Boudreau. That works out to a 20-46-66, +19 full season rate of production. Let’s look at this another way and compare his first three seasons (a partial and two more or less full seasons) with another defenseman and his first three seasons (a partial and two full seasons):

Let’s also note that Green played his partial first season and his first full season with a struggling team. Player 2 played on a team that made the playoffs in both his partial first and then his first full season. Player 2 is Scott Niedermayer. Green is by no means there, yet. He is not the Scott Niedermayer of the last ten years, but it is not beyond reasonable to think he will get there. More to the point, being managed by a coach who gives him sufficient latitude to do the things he does best, and being paired with a defenseman who complements his style very well by being a stay-at-home type (Shaone Morrisonn), he could move a little closer to that high standard in 2008-2009.

Cheerless’ take: Twenty seconds. That’s how much penalty killing time per game Green had last year. Shoot, Joel Kwiatkowski got more: 33 seconds (Uh, Cheerless?...Kiwi played in only 18 games). That’s Patrice Breeze-by territory (22 seconds). Among top ten defenseman scorers, Green had by far the lowest amount of PK ice time (Mark Streit: 49 seconds/game, the only other top-ten scoring defenseman with less than 1:20 of PK time/game). Oh, and that Niedermayer comparison?...Scotty had 3:33 of PK time/game in 48 games. Are the rest of the Caps’ defenseman that good at killing penalties that he should be last among the defensemen in that measure?

But what is interesting about that “Boudreau Stage” is that it represents something of a continuation of Green’s performance under Bruce Boudreau at Hershey…68 regular season games, 12-39-51, +9, 3 PPG.

Green does have issues in his own end. He can be at time a little lackadaisical with the puck, and he can seem to lose focus at times. Both seem the kinds of things that plague a lot of young defenseman. We don’t put a great deal of stock in the penalty killing time issue – sorry, Cheerless – since he logs so much time otherwise. What Green is, is almost the prototypical post-lockout defenseman (“offensive” category). He skates well, handles the puck well, has good judgment (given his age and experience) in jumping into the play in the offensive end, has a good sense of timing on weak side plays, is effective on the power play. In the last ten years, only one defenseman playing more than 60 games in a season achieved a point-per-game performance (Nicklas Lidstrom – 80 points in 80 games in 2005-2006). Green, given his talent, the talent around him, and the philosophy of the club, appears best positioned among current NHL defensemen to achieve that level of production. It will not, however, be this year.