Week 2 of the NHL season is in the books, and if the 2013 season for the Washington Capitals is like a semester’s worth of time trying to learn a new subject, then in Hockey 101, “Philosophy and Principles of Oates Systems,” the students need to pick up the pace of performance in grasping the subject.  Let’s take a look at the week that was… 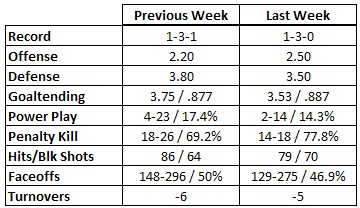 Week 2 was not an improvement on Week 1.  In fact, if anything it was a step backward.  The Caps blew two leads, and with them the games, couldn’t keep pace with the Pittsburgh Penguins over the last 37 minutes of another game (getting outscored, 4-1, in a 6-3 loss), and hung on for their only win of the week against a team that was beat up and struggling themselves.  The rule of thumb in managing home and away games is that to be successful a team has to rule at home and break even on the road.  The Caps are turning this maxim on its head.  Their 1-1-0 week at home left them 2-2-0 at home, and their oh-fer in Ontario left them 0-4-1 on the road.  As Cheerless might say, “them’s lottery-makin’ recipes right there.”

The Caps finished the week tied in scoring offense with the only team they defeated for the week, the Philadelphia Flyers.  Troy Brouwer – yes, Troy Brouwer – led the Caps in goals for the week with two.  Eight other Caps had one.  Well, at least there was balance.  Nicklas Backstrom led the team in points with a 1-4-5 week with Mike Ribeiro right behind at 1-3-4.  One of the problems the Caps are having is not generating much in the way of shots on goal.  They averaged just over 26 shots on goal for the week, but that included a 33-shot effort against Ottawa in a 3-2 loss to open the week.

If the word “unacceptable” is one that is tortured to within an inch of its life by this team, the word applies to this aspect of the Caps’ game.  Giving up 3.5 goals a game to four teams, only one of which ranks in the top third of the league in scoring offense (Pittsburgh, and if they put up three instead of six against the Caps on Sunday, they would not be in the top ten), two of which are in the bottom half of the league scoring offense rankings…well, that’s “unacceptable.”  The problem is letting games getting away from them after reasonably decent starts.  The Caps allowed only three first period goals in the four games.  But five second period goals and six third period goals killed them.  They can do well for 20 minutes, but in a 60 minute game too many lapses are creeping in as the clock ticks.

This week was a tale of two goaltenders.  Michal Neuvrith played reasonably well with a 3.05 goals-against average and a .910 save percentage.  His problem was a defense in front of him that left too much for him to do (67 shots faced in the two games).  He wilted late in games, allowing four goals on 28 shots (.857 save percentage) in his two third periods of work this week.  Braden Holtby had the last two games of the week and did not do enough to challenge Neuvirth as the number one goalie for the moment.  He got the only win of the week, but his 4.00 GAA and .860 save percentage did not advance his cause much.

The week’s numbers are worse than they look.  The Caps were 0-for-5 on first period power plays for the week, failing to cash in on opportunities to put opponents back on their heels.  For the week they got a blast from the past in an Alex Ovechkin power play goal (giving the Caps a second period lead against Toronto they would later lose) and an extra-man tally by Mike Ribeiro in a game that was pretty much lost by the time he scored it three minutes into what was a 5-2 game that became a 6-3 loss to Pittsburgh.  If the Caps’ power play is the proverbial “work in progress,” the “progress” part is not happening yet.

It is not bad enough that the Caps are inefficient on the penalty kill (evidenced by its rank), but the Caps have faced the second highest number of shorthanded situations, only one fewer (44) than Dallas.  The 18 shorthanded situations this week left the Caps with little chance to establish any rhythm or continuity at the other end of the ice.  To make matters worse, the Caps allowed another 5-on-3 power play goal, making it four on the year, tops (or bottoms) in the league.  We should also point out that the Caps have allowed 12 power play goals this season (worst in the league); John Carlson has been on the ice for ten of them (worst in the league).

It is that blocked shots number that jumps off the page.  The Caps allowed 124 shots on goal this week and blocked only 70.  It is leaving goaltenders with too much to do in the way of facing shots than is healthy for a team’s standing in the conference.

The Caps were awful in the offensive zone on faceoffs.  A 15-for-27 effort against the Penguins only salvaged a portion of the week in that regard.  Overall they were 36-for-92 in the attacking end (39.1 percent).  The centers on the top two lines – Mike Ribeiro and Nicklas Backstrom – were a combined 20-for-51 (39.2 percent), Ribiero going 7-for-24 all by himself (29.2 percent). It was a lousy week on the dot.

The Caps were charged with 54 giveaways for the week, and it got worse from game to game.  While true that every rink has its own interpretation of what constitutes giveaways and takeaways, going from four to 12 to 16 to 22 is not the sort of progression one hopes for.  Even just the optics, the Caps did not look to be especially responsible with the puck.

On paper, this team is vastly better than either of those teams coming out of the 2004-2005 lockout, but it is not playing better.  And if the threshold for making the playoffs in the abbreviated 48-game season is 54 points (the 48-game equivalent of last year’s threshold), then this team needs to play like a 103-point team (the pace they would need to set over their last 39 games) to get there.

Based on this week’s results, this is not that team.