The Peerless Prognosticator is ON THE AIR!!! -- Game 47: Ducks at Capitals, January 22nd

The Washington Capitals have been a perfect storm of offense, defense, and goaltending this season, inflicting blizzard conditions on opponents across North America.  It just seems fitting that the Capitals will host a hockey game as an historic storm winds up literally over their heads.  As Winter Storm Jonas unleashes its fury on the Washington metropolitan area, the Capitals will be looking to unleash their own brand of fury on the Anaheim Ducks on Friday night.

The Capitals come into this game as winners in seven of their last eight contests and face an Anaheim team that has won four of their last six games, each of their losses suffered by a single goal.  The Ducks, on many preseason short lists as a bona fide contender to reach the Stanley Cup final out of the Western Conference, has struggled throughout the season.  The source of their problems has been entirely unexpected.  Bruce Boudreau, who was behind the Capitals bench in 2009-2010 when they posted the highest goals per game average for a season (3.82) since the 1995-1996 season, has presided over an offense that is the only one in the NHL to average less than two goals per game (1.98 to be precise).

Anaheim has been a bit more productive lately, outscoring their opponents by a 17-12 margin over their last six games.  It has been a product of better 5-on-5 performance.  The Ducks outscored opponents, 13-9, at fives, quite an improvement over their 43 goals for and 64 against (minus-21) in their first 39 games (numbers from war-on-ice.com).

Individually, Jakob Silfverberg leads the Ducks in scoring over their last six games, recording seven points on three goals and four assists.  He is typical of a team that has struggled over the first 35-40 games but lifted their game a bit recently.  Over his first 39 games this season he was 3-3-6, but over his last six games he more than doubled his offensive production to date.  Silfverberg is still well behind his scoring pace of last season when he was 13-26-39 (all career bests) in 81 games.  In seven career games against Washington, he is 1-2-3, even.

A player who has gone a bit sideways over the last six games, at least in his offensive production, is defenseman Sami Vatanen.  The four year veteran leads the Duck defensemen in goals (6), assists (16), and points (22), but in his last six games he is just 1-1-2.  Vatanen has not exactly lit it up on the road this season.  He is 2-4-6, minus-3, in 19 road games.  He does not have a point in two career games against the Caps.

Corey Perry is the other Duck with three goals over their last six contests.  Perry, a 50-goal scorer in 2010-2011 when he won the Richard and Hart Trophies, has settled into being a goal scorer who can reliably score at a 40-or-so goal rate per 82 games.  Since his 50-goal season he has averaged 38.7 goals per 82 games.  He is a bit off that pace this season with 17 goals in 45 games, and that is a product of low road production.  Perry has just two goals in 19 road games.  He is 5-8-13, even, in 11 career games against Washington. 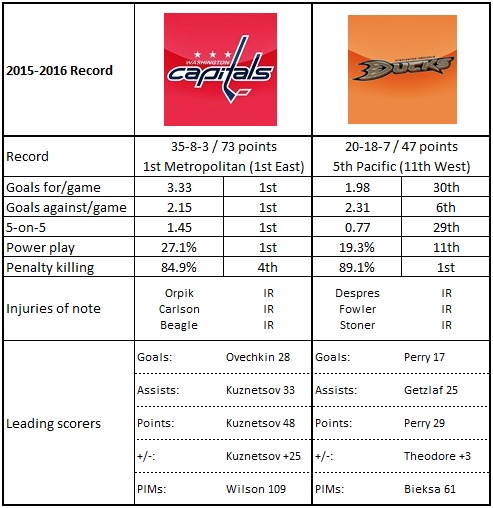 1.  Only one Duck having appeared in more than 20 games this season is a “plus” player.  Defenseman Josh Manson is plus-1 in 35 games.  Six Ducks are double-digit minus players, including Carl Hagelin, since traded to the Pittsburgh Penguins.

3.  This will be the first road game for the Ducks in three weeks.  They beat the Canucks in Vancouver on New Year’s Day, 2-1, in a Gimmick.  They have allowed only one goal in their last three road games.  Then again, they have scored only three goals in the hockey portion of those three games, preceding their win in Vancouver with a pair of wins in Alberta, a 1-0 win over Calgary and a 1-0 win over Edmonton.

4.  Anaheim plays with a large chip on its collective shoulder.  The Ducks are tied for the league lead in fighting majors (27, with Columbus), far ahead of the third-place team (Philadelphia: 21).

5.  While Anaheim has been unproductive on offense, it has not been a function of poor possession numbers.  They have been a superior road team in this regard, fourth overall in the league in Corsi-for percentage (52.1), fifth in score-adjusted Corsi (52.7), and second in close score situations (52.4).

2.  T.J. Oshie has a knack for drawing penalties at home.  At 5-on-5 this season he leads the team with a plus-6 in penalty differential (drawn versus taken; numbers from war-on-ice.com).

4.  The Caps have one bench minor penalty this season so far.  Only the New York Rangers are without one.  Little things from which big things might be built.

So far this season, 797 skaters have dressed for NHL games.  Of that number, 343 of them have more goals than Ryan Getzlaf through Wednesday’s games.  Of that number, 535 skaters have a shooting percentage better than Getzlaf’s 3.6.  Three goals on 84 shots on goal was not likely to be a feature of the Anaheim plan for this season.  He does have two of those three goals on the road, though, but he has yet to light the lamp in the 2016 portion of the season.  This is a player who averaged 24.0 goals per 82 games over his career coming into this season, and he is only 30 years old, just four months older than Alex Ovechkin.  It is hard to think this is a late-career decline on Getzlaf’s part, merely an extended run of poor shooting luck.  One only hopes he does not find a cure in Washington.  In 10 career games against the Caps he is 3-7-10, minus-1.

This has been a season of challenges for Andre Burakovsky, but he is showing signs of emerging from the funk that permeated his game over the first half of the season.  In his last five games he is 1-6-7, plus-5, with three two-assist games (his total of two-assist games for the season).  He has shown himself to be an adept playmaker, which leaves his shooting as an aspect of his game to keep an eye on.  Not so much for the results (even of more would be nice) as the attempts.  Burakovsky has a total of eight shots on goal in his last seven games, and his shooting frequency (1.16 shots on goal per game) is a bit off from last season (1.23).  His next assist, however, would tie the total he has last season in 53 games.  Burakovsky recorded two of his nine goals last season, including the game-winning goal, in the Caps’ 5-3 win in Anaheim over the Ducks.  It was his only two-goal game last season and his only such game thus far in his two-year career.

History will be made outside the arena on Friday evening as Washington is slowly buried under a blanket of snow.  It is a metaphor for the Caps’ season, the team being able to slowly and methodically bury opponents with goals from a deep offense and use an oppressive defense and goaltending to silence them at the other end of the ice.  The Ducks are a team for which being on the road will be a bit of a novelty, this being their first road game in three weeks, and there are the travel distractions that will test their focus (they are scheduled to play in Detroit on Saturday).  There is every reason to think that Caps fans braving the elements will be rewarded for their fortitude.

Posted by The Peerless at 8:28 PM No comments: