When the smoke cleared from Week 8, the Caps were being challenged on multiple fronts.  First, they had a 1-1-1 week that could qualify as a disappointment given that two games were at home and the other was on the road against a rebuilding team.  The Caps were also dealing with injuries to Nicklas Backstrom, Nic Dowd, and Carl Hagelin, important elements of the team’s offense and penalty killing.  Then there were the pesky New York Islanders, who show no inclination to lose much lately, going 15-0-2 in their last 17 games.  Still, the Caps ended the week with the league’s best record once more, and that is never a bad thing. 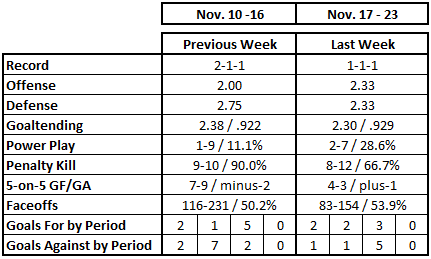 Week 8 brought an end to a five-week streak of winning records.  It was only the second time this season that the Caps finished a week with a .500 record in standings points won out of those available.  They have yet to post a losing week.

That result was the product of the Caps losing consecutive games for the first time since they lost three in a row (0-1-2) in Games 3-5 of the season.  Until they lost to the New York Rangers on Wednesday, the Caps were 14-3-2 in 19 games since those consecutive losses.

The odd part of the week might have been how it ended.  The 2-1 Gimmick loss to Vancouver was the Caps’ four game of their last seven decided in the freestyle competition, going 2-2 in those four decisions.  It was their second loss on home ice in the trick shot phase; they do not yet have a win on home ice in that portion of the game. 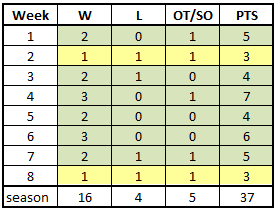 When the Caps roughed up the Anaheim Ducks for five goals to open the week, it had the looks of another in a series of weeks in which the Caps filled the opponents’ nets with pucks.  It was the eighth time in a span of 15 games in which the Caps posted five or more goals in a game and ninth time overall this season.

It is unsurprising that the individual results were sparse.  Jakub Vrana was the only one of six goal scorers to record as many as two for the week.  It brought his total for the season to 11, second on the club to Alex Ovechkin’s 15 (he had one this week).  The Caps had 11 skaters with points for the week, but only four of them had more than one.  John Carlson led the group with four points (all assists), and he was the only defenseman to record any points for the week.  It might bear noting that the Caps have gone seven games without a goal from a defenseman, not since Jonas Siegenthaler scored his first NHL goal in the Caps’ 5-2 win over Vegas on November 9th.

In a way it was a frustrating week.  The Caps did not lack for shots, posting more than 30 in each of the three games and at least 45 shot attempts at 5-on-5 in all of them.  For a team as efficient at shooting the puck as the Caps, fifth in the league in shooting percentage at week’s end, it might have been just, as they say, one of those weeks.

It was a deceptive week in some ways for the defense.  There is that fine scoring defense number of two and a third goals a game.  The deceptive part is in having allowed all three opponents more than 30 shots on goal and two of them more than 45 shot attempts at 5-on-5.  Oddly enough, it was against the Rangers in the lone regulation loss for the week and in which the Caps gave up more than half of the week’s worth of goals allowed that they allowed fewer than 40 shot attempts at fives (36).

The shots against are creeping up for the Caps, who have allowed more than 30 shots on goal in three straight and eight of their last nine games.  The Caps have not held opponents to fewer than 30 shots in consecutive games since Games 6 and 7, when they held Dallas and Colorado to 25 shots on goal apiece.  Since opening the season by holding the first four opponents under 30 shots a game, the Caps have allowed 30 or more in 16 of 21 games.

Braden Holtby took all the minutes in Week 8 and was very good once more.  Take away a 23-second stretch of the third period against the Rangers, in which he allowed goals on consecutive shots, and he was excellent.  His first periods (23 saves on 24 shots in three games/.958 save percentage) and second periods (31 for 32/.969) were superb.  He had the bang-bang goals scored by the Rangers in the third period of that contest, and he had a couple of window dressing goals scored by Anaheim to start the week, but he was generally at or near the top of his game, which is more a matter of consistency than the fancy shutout followed by an iffy effort.  Even with the four goals allowed to the Rangers, Holtby finished the week 10-1-2, 2.41, .925 in his last 13 games.

The good news for the power play is, of course, the efficiency.  The 28.6 percent power play for Week 8 tied Week 2 for the top week of the season in that regard.  The bad news is that Week 2 power play converted four of 14 chances, while the Week 8 power play converted two of seven chances.  Worse, after going two for four in the first two games of the week against Anaheim and the Rangers, the Caps could not convert on any of their three chances against Vancouver in a game that ended up tied 1-1 after 65 minutes.

The Caps, while reasonably efficient shooting on the man advantage, managing two goals on 12 shots, recorded those 12 shots in 11:36 of power play ice time.  Good, if not great at generating shots.  There were a couple of surprises in the shooting detail  First, Alex Ovechkin did not lead the team in power play shots on goal for the week, Evgeny Kuznetsov did (four shots, one goal).  The second surprise was that with Nicklas Backstrom out with an injury for the last two games of the week, Travis Boyd skated 4:14 in power play time in the last two games of the week, recording three shots on goal to tie Ovechkin for second for the week. 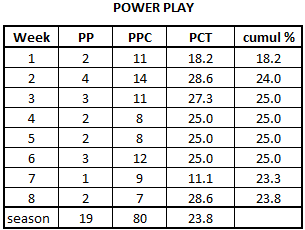 There is little good to say about penalty killing in Week 8.  Four goals, at least one in each of the three games, the first time this season that the Caps allowed power play goals in three straight games this season, allowing the Rangers to score a pair of power play goals for the first time in 11 games on their schedule, and worst penalty killing efficiency by week for the season.  It was not an efficient penalty kill in other respects, either.  The Caps spent 21:51 for the week killing penalties and allowed their three opponents 26 shots on goal, too much and too many for a three-game week. 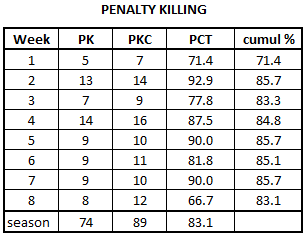 The week in the circle was good overall but uneven in the detail.  A 53.9 percent faceoff winning percentage has to be considered good, but there were problems lurking underneath the top line number.  Specifically, the offensive end was a problem.  The Caps did not hit 50 percent in the offensive zone in any game and finished the week just 22 for 51 (43.1 percent).  The Caps were much better in the other end of the ice, winning all three games and finishing the week at 42 for 66 (63.6 percent).

The trend filtered down through the individual numbers.  Six Capitals took ten or more draws for the week, and five of them finished at 50 percent or better.  None of them, however, finished the week over 50 percent in the offensive end (Lars Eller was best at 6 for 12).  All six did finish over 50 percent in the defensive end.  It was only Chandler Stephenson finishing the week 0-for-6 in the neutral zone that kept the Caps from having all six of those players finish at 50 percent or better for the week.

First periods…outscored opponents, 2-1.  Second periods…ditto.  Third periods...ugh.  The third period did in the Caps against the Rangers, who posted three of the five goals scored in the last 20 minutes of regulation for the week.  The other two goals were more or less cosmetic scores by Anaheim in a 5-2 Caps win, but one would still like to see games wrapped up more tightly than that.  Those five goals added to the third period tally represent a 25 percent increase in third period goals allowed for the season from beginning of Week 8 to the end.  There is no way to explain that away as being anything other than insufficiently stingy in the ends of games.  The silver lining, thin as it is, was that the Caps did not allow a third period goal to Vancouver in what was a 1-1 game entering the third period, thus preserving a standings point for the Caps in the 2-1 Gimmick loss. 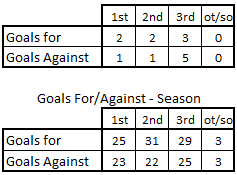 By this time last season the Caps were hitting their stride, and with a 1-1-1 week with weak offense, this year’s club has lost a lot of its advantage over last year’s squad through 25 games.  This team has shown a better ability to date in squeezing out points, with a win and two extra time losses replacing three of last year’s seven losses in regulation at this point.  But the year-over-year differentials in goals scored and goals allowed have narrowed, reflecting the growing similarity in win-loss record.  This team does maintain significant improvements in the more difficult areas of the game – penalty killing, shot and shot attempt differentials, faceoffs, and hits, a sign that a “heavy” team might be playing just a bit heavier. 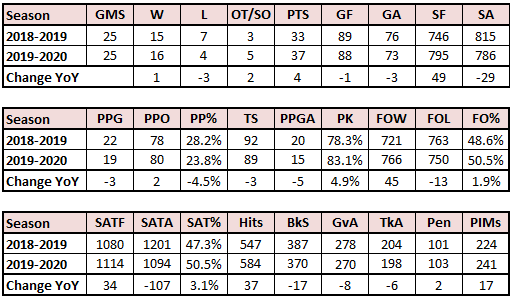 Week 8 was not a good week, but neither was it a bad one, especially since the team missed Nicklas Backstrom for two games with an injury, and the lineup that took the ice against Vancouver to end the week featured three players – Mike Sgarbossa, Beck Malensyn, and Travis Boyd – who started the season in Hershey, and another (Richard Panik) who has lost a big chunk of the season to date with injury and has yet to find his complete game in Washington.  Still, this is one of the best 25-game starts in team history.  Only three teams had more than the 16 wins this team has (2010-2011 had 17, 1991-1992 and 2015-2016 had 18), and only the 2015-2016 team had more standings points after 25 games (38) than this team (37).

It sets up the Caps for an interesting Week 9 in which the distractions of Thanksgiving week, even with a pair of games at home around the holiday, stand against the success that the Caps have had against Atlantic Division teams this season (5-1-0) and since the realignment into current divisions, the 100 wins the Caps have against the division being more than any team not in the Atlantic and more than Atlantic teams Florida (94), Ottawa (85), Toronto (84), Detroit (71), and Buffalo (67).

Two puppers
Posted by The Peerless at 1:28 PM No comments: