The Peerless Prognosticator is ON THE AIR!!! -- Game 82: Florida Panthers at Washington Capitals, April 9th

Every new beginning comes from some other beginning's end.
-- Seneca

What started on October 13th in Pittsburgh, watching the Penguins hoist the 2016 Stanley Cup, comes to an end on Sunday evening in Washington.  For the Washington Capitals, the 2016-2017 regular season comes to an end in a contest with the Florida Panthers.  The game has little meaning other than being the 82nd game in an 82-game schedule, perhaps for some fans their first or only chance to see the Capitals in person this season, certainly not a meaningless consideration for them.

For the Florida Panthers, the last six weeks have been nothing short of disastrous.  On February 20th they wrapped up a five-game road trip with their fifth win in five tries, a 2-1 win over the St. Louis Blues.  With a 28-20-10 record, they were fourth in the Atlantic Division and held the second wild card spot for the postseason.

Then, the bottom dropped out of their season.  Since that five-game, five-win road trip, the Panthers are 5-16-1 entering their last weekend of games of the season and have not won a game in regulation on the road since that 2-1 win over St. Louis on February 20th (their only road win came in a Gimmick in New York against the Rangers on March 17th).

Jonathan Marchessault has recorded almost a quarter of the total number of goals scored by the Panthers over their 22-game slide (13 of 54).  It is part of a larger career season in which he has already reached the 30-goal mark, more than three times his career goal total (8) in 49 games over three seasons with Columbus and Tampa Bay preceding this one.  What he has not been, though, is a prolific goal scorer on the road this season.  Marchessault has 22 goals in 37 home games, but has just eight in 36 road games.  He has had just three goals in his last 25 games on the road.  And, he is a team-worst minus-19 in this 5-16-1 slide for the Panthers.  Marchessault is 0-2-2, minus-1, in five career games against the Caps.

Keith Yandle started each of his first nine seasons as a member of the Coyotes, both the “Phoenix” and the “Arizona” versions.  However, he was traded twice in a 15-month period, first to the New York Rangers at the 2015 trading deadline and again last June from the Rangers to the Panthers.  Before those trades, Yandle was among the most prolific offensive defensemen in the league.  From the 2009-2010 through 2013-2014 seasons, he was tied for sixth among all NHL defensemen in goals (52) and third in points (226).  While he has still maintained a high level of offensive output (he has 40-plus point in each of the last three seasons, including this one), he does not appear to be the missing ingredient to push his club to the next level.  He does lead the Panther defensemen in points in their 5-16-1 stumble (2-10-12), but Florida is just 2-7-0 in games during that run in which he recorded a point.  Yandle is 1-11-12, minus-1, in 18 career games against the Caps.

Roberto Luongo has not been in the Florida nets since leaving the game after one period in a 2-1 trick shot loss to the Philadelphia Flyers on March 2nd and seems unlikely to play again this season.  Starting with his effort in relief of Luongo on March 2nd, James Reimer has had the bulk of the work in net.  In his 14 appearances since relieving Luongo, Reimer is 4-8-1 (one no-decision), 3.07, .908, with one shutout.  Reimer, who was signed away from the San Jose Sharks as a free agent last summer, has had a pretty good year as Luongo’s backup (and now replacement).  He is 16-16-5 going into the weekend’s games, his win total just one behind the 17 he had last season split between the Toronto Maple Leafs (for whom he played almost six seasons) and the Sharks.  He has been remarkably consistent this season, going 8-9-1, 2.67, .916 at home (with one shutout) and 8-7-4, 2.66, .914 on the road.  Reimer is 2-4-2, 2.57, .922 in eight career appearances against Washington. 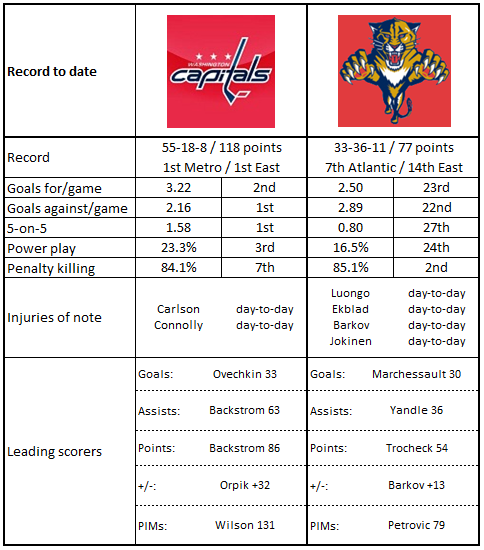 4.  Oddly enough, no team in the league has more shots on goal in that span of time than the Panthers, who have 751 shots on goal (34.1 per game) since February 22nd.

5.  Florida might have been playing in some bad luck over those last 22 games.  Their shot attempt percentage (50.55 percent) is 13th in the league over that span of games (numbers from NHL.com).

1.  The Caps have already clinched the best home record in the league (they are 32-6-2 to 31-6-4 for Pittsburgh), and unless they set a record for goals allowed in a home game, they will finish with the fewest goals allowed at home (currently 65 to 79 for Anaheim) and the best goal differential (currently plus-58 to plus-44 for Minnesota).

2.  When they failed to score on four power play chances against the Boston Bruins on Saturday, it put aside any reasonable chance the Caps could finish with the best home penalty kill in the league.  They would have to go 6-for-6 or better to finish first.

3.  Should the Caps win this final game, they will finish the season with precisely the same record with which they finished last season – 56-18-8 and 120 points.   As it is, the 55 wins they have is the second-highest win total for a season in franchise history.

5.  The Caps have the second best shooting percentage on home ice at 5-on-5 (10.04 percent) and the best save percentage at fives at home (94.82 percent; numbers from Corsica.hockey).

A few days ago, Jaromir Jagr sat down for an interview with ESPN.  In it, when confronted with a comment that he joked about playing until he was 50 years old, he responded: “I wasn't joking. I was serious. I'm not joking. If God gives me the health, I will.”  Jagr will not reach the age of 50 for another five years, but if he does last that long, we might find himself at the top of just about every meaningful statistical category in NHL history (ok, at least among players not named “Gretzky”).  As it is, he is currently fourth all-time in games played (1,709 through Thursday), third in goals (765), fifth in assists (1,147), second in points (1,912), tied for tenth in power play goals (217, with Mike Gartner), first in game-winning goals (135), and second in shots on goal (5,598). If Jagr, who is an unrestricted free agent after this season, averages over the next five seasons his production this season (16-28-44), he would finish first in all-time games played, second in goals, second in assists, and as one of just two players in NHL history with more than 2,000 points, Gretzky being the other.  At the moment, he alternated games with points over his last five contests and is 5-5-10, minus-8, in the Panthers’ 5-16-1 slide.  Jagr is 32-61-93, plus-16, in 82 career games against the Caps.

Karl Alzner has had a difficult year.  Never a particularly big contributor on the offensive end, his game is keeping things quiet in his own end with a combination of position, angles, and experience to keep opponents from getting good scoring chances.  But of 12 pairs of defensemen having played at least 50 5-on-5 minutes together this season, Alzner is half of three of the worst six pairs of defensemen in Coris-for percentage (numbers from Corsica.hockey).  Brooks Orpik, John Carlson, and Nate Schmidt are the other halves of those pairs.  Schmidt and Orpik ranking third and fourth in Corsi-for among the six defensemen playing at least 300 5-oon-5 minutes this season, Alzner has been something of an anchor.  His personal Corsi-for at fives has been in decline the past few seasons, and it does sound alarm bells about whether Alzner becomes a focus of teams as a player to exploit in the postseason.  Alzner is 2-5-7, plus-10, in 31 career games against Florida.

There is one lingering morsel to consume in this regular season for the Caps.  With a win against the Panthers, they will win their 33rd game on home ice this season, the most of any team in the post-2004-2005 lockout era, topping the 32 wins posted by Nashville in 2005-2006, San Jose in 2008-2009, and Tampa Bay in 2014-2015.  It would be the most home-ice wins for a team since the Detroit Red Wings won 36 games on Joe Louis Arena ice in 1995-1996.  It is small stuff in the larger context of the postseason on which the Caps are about to embark, but it is just one more measure of just how good a season this team has had.

Posted by The Peerless at 7:23 PM No comments: