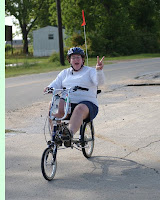 With the 2-1 win over the New York Rangers tonight, the Caps now have – with their 26-11-3 record – their best 40-game start in franchise history. It was a hard earned win, to be sure. Let’s get to it…

We’re giving Alexander Semin a new nickname – “Bongo.” If you saw his “fight” against Marc Staal in the third period, you’ll understand. And what was with the pink undershirt, anyway? But that said, at least he threw punches (of a sort), which isn’t something you could say about Mr. Baby Blue in ’87’ earlier in the day. 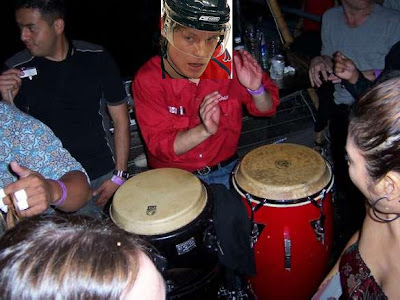 There are certain Capitals who are thought of only as offensive players. Alex Ovechkin, Nicklas Backstrom, Mike Green. It is worth noting that all three were on the ice to protect a one-goal lead in the last minute of the game. More to the point, all three of them skated for almost 90 seconds on their last shift – lengthened by an icing call, no doubt – but they got the job done.

Eric Fehr had a whale of a game for a guy who didn’t put a mark on the score sheet. He had eight shot attempts, three takeaways (that led the team), and was very effective pestering Rangers in their end. We think he needs to change stick makers, though, if just to find the mojo.

Dr. Jekyll and Mr. Green…two penalties before the game was 22 minutes old, then one of his patented weak-side pinches to tie the game after the Rangers scored 79 seconds earlier.

If the best players on the ice for the Rangers are Lauri Korpikoski and Petr Prucha, the Rangers aren’t going to win a lot of games. That’s no knock on those two – they’re a couple of players to watch. But where in heavens were Scott Gomez and Chris Drury?

Some columnists – well one we can think of – will have fun talking about Wade Redden not being able to thwart Alex Ovechkin on the rush that produced the game-winning goal. But Ovechkin played things smart by faking a shot and just changing his skating and shooting angle ever so slightly upon entering the Ranger zone. And does anyone in the league do a better job of using the defenseman as a screen in getting off his shot?

Ovechkin had 21 shot attempts in 24 shifts. He had three hits and a goal (shorthanded), too. Sort of makes that all-star game vote look more and more like a joke, doesn’t it?

Speaking of shorthanded goals, Bruce Boudreau knew what he was doing putting the Alexes out on the penalty kill. He noted in the post-game that the Rangers had allowed the most shorthanded goals in the league – 11. And now, they have 12.

Chris Clark might not have a lot of goals this year (ok, one), but he was making sure the Rangers knew where he was all night, even though he had just a little over nine minutes of ice time. Not only did he mix it up with Redden, but he was driving to the net and creating traffic. That’s a sign he seems to be back. Maybe now he’ll pot a few rebounds (Tuesday would be nice).

The Rangers had 22 shots, but did they really have any good scoring chances other than the Prucha goal? Jose Theodore probably played himself out of a star by being very quiet and efficient in goal – not many rebounds and efficient at directing the puck out of harm’s way.

Speaking of the Prucha goal, if that wasn’t an offside immediately before the goal, then…well, you tell me if Prucha wasn’t offside at the top of the screen. 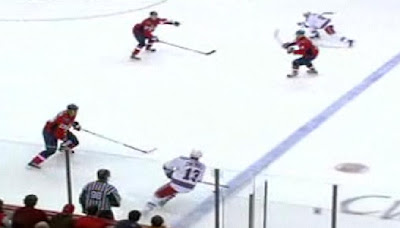 Of course, you might also want to explain how it is that four Caps let two Rangers get all the way inside them on the play, too…

OK, the Caps lost more faceoffs than they won (they were 25 up and 27 down), but won 11 of 16 in the defensive zone. A valuable outcome in a tight, low-scoring game.

Once more…order has been restored to the universe.

Tonight was the fifth consecutive sellout for the Caps and the ninth in 19 home games this year. Last year after 19 home dates, the Caps had one sellout.

The Caps won in a land rush sort of game against Tampa Bay on Thursday, and they won in a closely fought game tonight. And at 17-1-1 at home this year (23-1-1 in their last 25 home games), Verizon Center has become as difficult a place to visit as just about any arena in the league. Great job, boys.

Oh, and if you're still wondering about why Semin might be called by "Bongo"...
Posted by The Peerless at 10:32 PM 7 comments:

The Peerless Prognosticator is ON THE AIR!!! -- Caps vs. Rangers, January 3rd

“This is your imagination.”

“Your imagination…you know, the guy who lives behind your eyeballs and dreams up all the stuff you write in this section of the blog.”

Uh…ok. What are you doing here? Shouldn’t you be dreaming up something witty to write about?”

On strike?…what on earth for? You’re not even real!

“Not real?...Just who do you think dreamt up that bit about ‘hockey virgins,’ huh?...and I suppose you thought up that riff on ‘Gilligan’s Island’ when you wrote about the Islanders, or the song about Ottawa to the music of ‘Mother?’"

“Damn straight it was me. And now, what? You don’t have anything to write about for this Rangers game, do you. Not an idea in your little pinhead, is there?”

Come to think of it…

“So here’s what I want…I want to go to a hockey game. I do all the thinkin’ in this dump, and you’re the one who gets to go to hockey games.”

Do you have anything special in mind?

“I was thinking a playoff game.”

Really…and I suppose you want to be chauffeured to it, too.

“I was thinking more along the lines of a trip.”

What?...maybe you’d like to get a seat on a private charter, too.

“The thought had crossed my mind.”

You’ve been reading too many other blogs, pal.

“Well, they have one advantage over this one.”

And that brings us to tonight’s game against the New York Rangers and the number of the day – 22.

That would be the number of skaters the Rangers have dressed this year. Considering a team dresses only 18 in a game and might carry as many as 21 on its roster, it speaks to the uncommon health enjoyed by the Rangers. Ten Rangers have played in every game this year. And here's their assembled body of work... 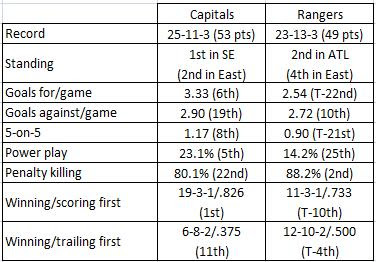 Compare the Rangers’ experience thus far with that of the Capitals. 30 players have dressed for the Caps (including 11 defensemen, a number that does not include turns at the position taken by forwards Sergei Fedorov and Brooks Laich), and only four – Nicklas Backstrom, Brooks Laich, Milan Jurcina, and Matt Bradley -- have played in all of the team’s games.

The Rangers have had a light schedule lately, which does nothing to adversely affect the team’s health. They have had only two games since their elegant implosion against the Caps on December 23rd when they gagged on a 4-0 lead in front of the home folks in a 5-4 overtime loss. New York split those two games, losing to New Jersey and beating the Islanders. In both, the Rangers – and goalie Henrik Lundqvist – allowed four goals, which make 14 allowed by King Henrik in his last three starts, all at Madison Square Garden. It is the first time since October 7-12, 2006 that Lundqvist has allowed four or more goals in three consecutive starts. He has never done it four times in succession – perhaps a point to keep in mind for this game.

The Rangers had a middling December (6-5-1), a month in which a struggling offense did little to assert itself. They scored more than three goals only three times during the month, and they lost two of those games (one in overtime, to the Caps).

The Rangers’ offensive problem is that their leading scorers aren’t producing. Leading scorer Nikolai Zherdev was 4-7-11 for December, but this is a bit misleading. He was 1-3-4 in an 8-5 loss to the New Jersey Devils on December 12th, 3-4-7 in 11 other games. Markus Naslund did have five goals in the month, but had only a pair of helpers and was a minus-8 in a dozen games. Chris Drury has shown some life lately, and he needed those five assists in his last three games to get him to 2-9-11 for the month. His having only 25 points this year (in 39 games) probably isn’t what Glen Sather had in mind when he signed Drury to a five-year, $35.25 million contract before last season. Scott Gomez had – on paper – a respectable month (3-8-11), but had three of those points in that 8-5 loss to the Devils and was minus-7 for the month in a dozen games. Those are the Rangers four top scorers.

We touched on this the last time these teams met, but it bears repeating for its stark difference with the Caps – the Rangers have dressed seven defensemen this year, six of them having played in at least 38 games. Only Michal Rozsival and Wade Redden have been asked to take a seat (for a game apiece in favor of Corey Potter). Of that group, only Marc Staal is on the plus side of the ledger this year (plus-5). Dmitri Kalinin had an especially difficult month (in what has been a difficult year), with one point and a minus-3 to show for it. He needed a plus-3 over his last three games to get to that level.

The Rangers are rested, and it can’t come at a better time for Lundqvist. The defense in front of him hasn’t been very good, and his team doesn’t generally score enough to give him any easy nights. In the game against the Caps on December 23rd, he stopped 23 of the first 24 shots he faced, but only eight of the last dozen and not the last one. When the Rangers played poorly enough to let the Caps think they could come back, Washington just kept pressing an underperforming defense, and it eventually overwhelmed Lundqvist. Given that the Rangers have dressed the same guys over and over, that cast isn’t going to change tonight, and that probably means that the Rangers will be putting the game, as they so often – too often – do, in the hands of Lundqvist. He has a fine career record against Washington (7-3-2, 2.68, .908), but he is winless in his last three decisions against the Caps (0-1-2, 3.93, .878).

Clark scored his first goal of the year on New Years Day against the Lightning. Perhaps it’s a sign. So is the fact that he is 3-3-6 in nine career games against the Rangers while a member of the Caps. Given that the Rangers might be in a surly mood after having endured the humiliation of gagging on a 4-0 lead on their ice the last time these teams met, Clark’s affinity with play in the rough areas and the measure of grit he can bring could be important.

One set of numbers that one’s eyes might focus on with respect to the Rangers is their goals for/goals against: 99/106. An odd ratio for a team that is ten games on the good side of .500. But that’s what being good in The Gimmick will do for a team. The Rangers are 8-1 in such situations this year. That leaves them 15-13-2 in games not reduced to a skills competition. In games decided in regulation, the Rangers are 13-13. Peel away the fluff, and this is a team that Caps should – and will – take advantage of…