The Peerless Prognosticator is ON THE AIR!!! -- Caps vs. Sabres, December 30th

Well, we’ve come to the end of 2008, and the Caps will ring out the year in the hip-hoppin’ burg of Buffalo, New York…The Queen City… Land of the Odd Chicken Parts as Bar Food… the town only snow could love. Speaking of snow and remote locales, we got really…really tired of all this “Malkin for the Hart” talk and decided to take things into our own hands and go to the people. No, not ESPN-addled, Crosby-sotted, Penguin wannabe hockey fans…folks who have never been biased by the All Penguins, All the Time marketing of the NHL. We went to places where people had never seen hockey (no, not Tampa) – Hockey Virgins, if you will – and asked them to choose between the Russians, Malkin and Ovechkin. Herewith, we present the results… 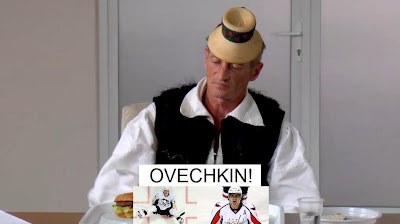 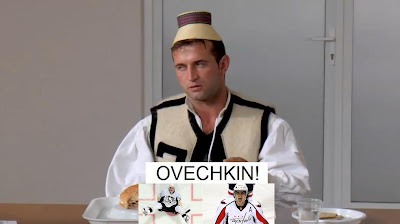 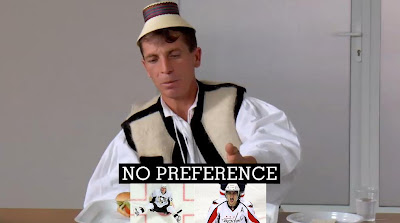 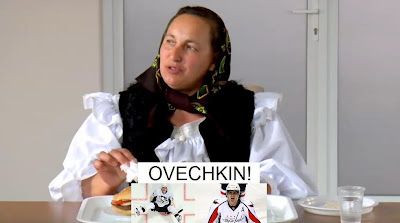 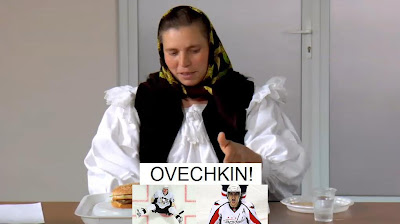 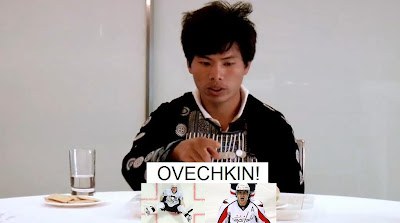 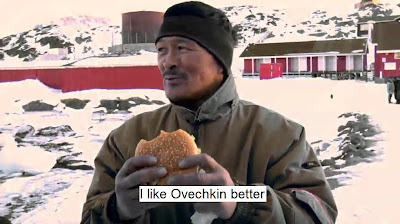 Well, the creepy obsession these folks seemed to have with hamburgers aside, we now have proof of which hockey player is number one in the hearts of unbiased hockey fans. And with that question settled, we can turn our attention to this, the last game of 2008. The numbers for the Caps and the Sabres… 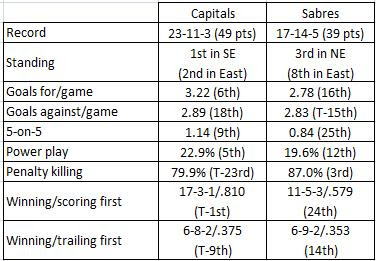 When last these teams met the past Friday, the Caps saw Patrick Lalime in goal. This time, the Caps are likely to see Ryan Miller. And this is a goalie who can be said to be in an odd slump. In his last five games he has allowed three or more goals in four of them. In the fifth – against Los Angeles on December 19th – he had a 40-save shutout. So, which is it? The goalie who was 3.86, .880 in the four games he allowed goals in his last five appearances, or is it the goalie who shut out the Kings in the other appearance and who is 8-2-0, 2.48, .911 in 11 career appearances against the Caps? Well, Miller does have a shutout against the Caps this year (5-0 on November 1st in Buffalo).

The skaters for the Sabres are, once again, characterized by their balance. 13 skaters are in double digits in points (to ten for Washington). Where they are not balanced, though, is in goal scoring. Thomas Vanek has 25 goals, exactly 25 percent of the Sabres’ total for the year. He has more goals than the next two goal-scorers, combined (Derek Roy, Jason Pominville). However, Vanek is in his most extended drought of the season. He has a single goal (in last Friday’s game against Washington) in his last six games. Vanek had a pair of tallies when the teams met in November and is 6-5-11 in 14 career games against the Caps.

Vanek’s goal-scoring aside, the Sabres are a team that can come at you from anywhere. Seven different players have game-winning goals against the Caps, none more with two. And oddly enough, that group does not include Jason Pominville, who always seems to play well against Washington (4-4-8 in 13 career games). But Adam Mair, not generally thought of as a goal-scorer, has a pair of game-winners among the four goals he’s scored against the Caps in his career.

And even though Vanek is the big goal-scorer in terms of volume, Derek Roy is a player who has picked his spots for big ones lately. Roy has five goals this month, three of them game-winners. He had a nine-game points streak snapped against the Penguins on December 22nd and was scoreless last Friday against the Caps, but did manage an assist in his last game, against the Islanders on Saturday.

If there is one place Buffalo has enjoyed a distinct advantage over the Caps, it is in stability on the blue line. Five Sabre defensemen have played at least 33 of the 36 games played by the Sabres this year. Only Milan Jurcina has played as many as 33 games this year (37) among the Caps defensemen this year. Those Sabre defensemen are led in total scoring by Jaroslav Spacek (1-17-18), who actually has a second job, playing as part of the ensemble cast of the NBC sit-com, ”The Office.”

In last Friday’s game, Spacek was on the ice for both of the Caps’ first two goals, once not getting over quickly enough to get into Viktor Kozlov’s shooting lane when the Caps’ winger fired a slap shot in full stride down the right wing, and once out of the play when Boyd Gordon deflected a Milan Jurcina drive past goalie Patrick Lalime. You wouldn’t call it a great night. The Caps have scored three or more goals in seven of their last nine games in going 8-1-0. The Buffalo defense will have to give Miller help, and Spacek is going to have to have a better game than he had on Friday.

In the 8-1-0 streak, Laich is 5-1-6 and is doing the dirty work in front that earns him scoring opportunities. Buffalo is not an especially physical team by NHL standards, especially among the defensemen. Laich is only 1-2-3 in ten career games against the Sabres, but he’s doing the things he does best to get into scoring position and could get some opportunities in this one.

Buffalo has not been hospitable to the Caps. Over the last five-plus seasons, the Caps are 3-8-0 and often have looked ghastly in losing. In all eight of those losses in Buffalo the Caps have allowed four or more goals. In seven of them they allowed five or more. More than even Pittsburgh, perhaps, this might be the most difficult city in which the Capitals have played in this decade. But while the Caps have struggled historically, the Sabres have struggled recently – 3-3-2 in their last eight games overall, 2-2-1 at home in that span. On the other hand, the Caps’ lone loss in their last nine games involved giving up seven goals to an opponent on the road.

Makes for an interesting game, doesn’t it? But you already know how we think this will end…