Someday, perhaps even this season, the National Hockey League will stop playing games and start playing games.  If there is to be a season this season, it will not be of the 82-game sort.  It could very well be a 64-game season.  That is a number that would make sense.  In each of the last four seasons NHL teams have played 64 games within conference, 18 in the other conference.  An abbreviated season would likely mean that each club would be restricted to an intra-conference schedule.

A 64-game intra-conference schedule then begs the questions for Caps fans, “is this a good thing, or is it a bad thing?”  Start with the face that the NHL has used the 64-18 conference split format for the last four seasons.  In each of the four seasons the Caps out-performed their overall record in their Eastern Conference schedule:

Over the last four seasons the Caps have averaged a record of 40-15-9, which works out to a 114-point pace over 82 games.  Only once in four seasons have the Caps had a record against the West of better than .500 (standings points).  Avoiding that west coast trip that always seems to stymie the Caps would have to be considered a good thing, at least for this regular season.  But is their record against the East any better than that of their Southeast Division counterparts?

Of the five teams in the Southeast the Caps are the only one to have averaged better than a standings point earned per game in all four seasons against Eastern Conference teams.  The down side of that is that the Caps have seen diminishing returns over the last three years (1.53, 1.41, and 1.19 standings points per game).  Fortunately, only Atlanta/Winnipeg has shown continuous improvement in that regard over the same three seasons (1.00, 1.03, 1.05). 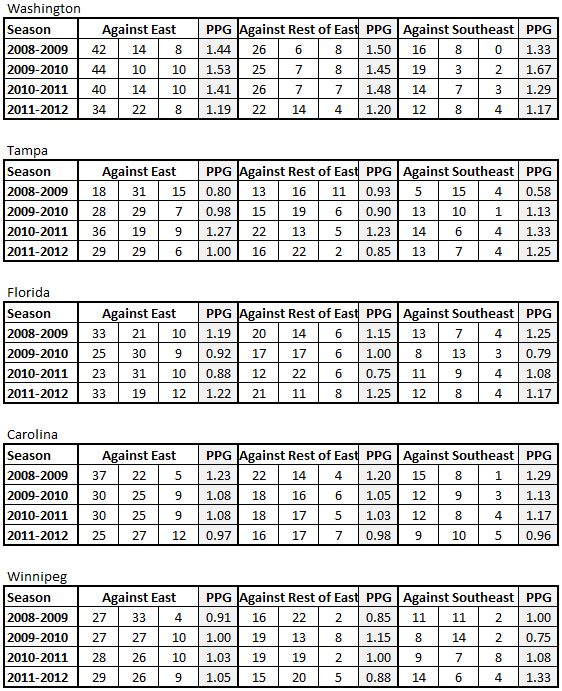 One could argue that a lot of that record has been built by the Caps at the expense of the rest of the division in intra-divisional play.  In fact, the Caps have been successful in that regard.  They are the only team in the Southeast to average more than a standings point earned per game in intra-divisional play over the last four seasons and the only team to achieve at least ten wins in each of those four seasons.

However, the Caps have enjoyed broader success in the East outside of the division than have their Southeast competition.  They are, again, the only team in the Southeast to have averaged more than a standings point per game against Eastern Conference teams outside the division in each of the last four seasons.  And only one team in the Southeast averaged more standings points per game against other Eastern teams than did the Caps (Florida last season, 1.25 to 1.20).

Seven Capitals from the 2008-2009 team who appeared in at least 20 games are still with the club.  That says a lot about turnover.  But within that group is the core of Alex Ovechkin, Nicklas Backstrom, Mike Green, Brooks Laich, and Karl Alzner.  The Caps have maintained an ability to outperform their divisional competition despite turning over two-thirds of the skaters and replacing both goaltenders.  That the Caps have been able to maintain an advantage in performance in the face of that turnover speaks to the ability of the core to perform at an effective level in the context of their division and conference in the regular season.

Still, the Caps recent history of success in the East suggest that should that season be played, and should it be limited to intra-conference play, the Caps will do well enough to secure a playoff spot.