The Peerless Prognosticator is ON THE AIR!!! -- Game 36: Capitals at Coyotes, December 22nd

After a second consecutive third period come-from-behind win, the Washington Capitals head to Arizona for the second of their four-game road trip to face the Coyotes.  The Caps, who came back to defeat the Anaheim Ducks and Dallas Stars in overtime after trailing at the 40-minute mark in each game, will be looking for their fifth straight win, ninth in ten games, and 12th in their last 14 games when they descend on Glendale.

In that seven-game losing streak the Coyotes have a total of nine goals scored.  Only Derek Stepan has more than one (two).  Stepan was traded to Arizona by the New York Rangers at the 2017 entry draft last June along with goaltender Antti Raanta for defenseman Anthony DeAngelo and the Coyotes’ first round pick in that draft, with which the Rangers took center Lias Andersson.  It has not been a fast start in the desert for Stepan, whose 6-14-20 scoring line in 36 games so far is off in terms of average goals, assists, and games from his last season with the Rangers (he was 17-38-55 in 81 games).  In this seven-game losing streak he is 2-1-3 and a whopping minus-11, worst in the league over that span.  He does have points in 10 of the 15 home games in which he has played so far (4-10-14, minus-3).  In 29 career games against Washington, Stepan is 6-7-13, minus-3.

Clayton Keller leads the team in overall scoring over their seven-game losing streak, going 1-3-4, minus-3.  Having appeared in only three games for Arizona last season, Keller remains rookie-eligible this season, and he is among the top-ranked rookies in offensive production.  His 12 goals ranks second to Vancouver’s Brock Boeser, while his 26-point total ranks third, behind Boeser (32) and the New York Islanders’ Mathew Barzal (30).  He also happens to lead all rookie forwards in ice time per game (18:48), although his minus-20 for the season is worst among that same group of rookie forwards, and not by a little (teammate Christian Fischer is minus-12 in 34 games).  Keller has a goal and is a plus-1 in his only career game against the Capitals.

The Coyotes have gone through five goalies this season so far.  Somewhere in there is a number one goalie, and that is probably Antti Raanta, at least at the moment.  He has appeared in 17 of the Coyotes’ 36 games to date, and if anything his numbers are respectable, given his team’s place in the standings.  His goals against average (2.82) ranks 28th among 50 goalies with at least 500 minutes played this season, and his save percentage (.916) ranks 19th.  He has been slightly better at home (2.76/.917).  However, he does not have a win since November 20th in what is a case of poor goal support.  In five appearances since then, Raanta is 0-4-0 (one no-decision), 2.62, .926.  He has faced a lot of rubber in that span though, averaging 35.5 shots faced per 60 minutes.  Raanta is 1-1-0, 2.59, .906 in three career appearances against the Caps. 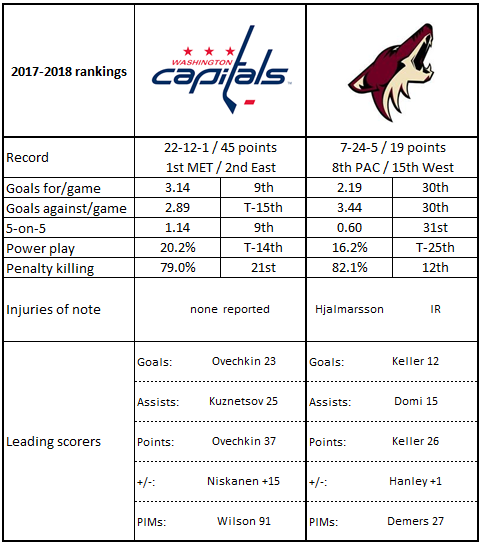 2.  The Coyotes have one skater among 27 to dress this season who is a “plus” player, and he – defenseman Joel Hanley – is plus-1 in four games played.

3.  Arizona doesn’t blow people out, even when they win.  Among their seven wins, they have five one-goal decisions. Two of their wins were by three or more goals, tied for second-fewest in the league (Buffalo has none).

4.  The Caps have 13 players with at least ten points so far this season.  Next in line is Chandler Stephenson (9), who is 30th in rookie scoring, despite playing in only 25 games to date.  The odd think is, he barely has as many shots on goal (11) as points.

5.  The Caps are one of three teams in the NHL who have two defensemen to have played in at least 29 games without recording a goal.  The other teams are Boston and Carolina; the Caps defensemen are Brooks Orpik and Madison Bowey.  Why do we think this will change on Friday night?

No team in the NHL has a lower club salary cap hit than the Arizona Coyotes ($58.6 million).  Within that salary structure, defenseman Oliver Ekman-Larsson is, at a $5.5 million cap hit through next season, manageable at worst and a bargain at best.  The 26-year old, a former sixth-overall draft pick of the Coyotes (2009), has already played in 530 regular season games in an eight-year career.  He has been durable, missing only 12 games in seven seasons as a full-time player, and he has been productive.  In those seven seasons as a full time player, he ranks fifth among defensemen in goals scored and 16th in total points.  He also has the misfortune to have played for a team that struggled, reflected in his minus-70 in those seasons, tied for third-worst among 93 defensemen who played in 400 or more games in those seven seasons.   Ekman-Larsson has been in a scoring rut lately, having an eight-game streak without a point just broken with an assist in a 3-2 loss to the Florida Panthers on Tuesday.  In ten career games against Washington, Ekman-Larsson is 2-4-6, even.

Alex Ovechkin, Nicklas Backstrom, and John Carlson have been around for a while.  It would be no surprise that among current Capitals, those three top the list of current Caps who have faced the Coyotes the most in a Capitals uniform.  What might be surprising is that Tom Wilson is fourth on that list, having played nine games against Arizona.  Except for his seven points in nine games against the Chicago Blackhawks, Wilson’s four points against the Coyotes in those nine games is tied for his second-highest total against a Western Conference team.  Half of that point total is the result of a 1-1-2 effort in a 6-5 loss to the Coyotes on November 2, 2014, and he has only one assist in three career games against the Coyotes in Arizona.  He has been coming on lately, though.  In his last eight games he is 3-5-8, plus-9.  But it has been entirely a home performance for Wilson.  In those eight games he is 0-0-0, even, in three road games.  He is 1-3-4, minus-1, in nine career games against the Coyotes.

On paper, this is a game the Caps could, should, and will win.  Arizona’s leading goal scorer, Clayton Keller (12), would rank second on the Caps, but there is not another Coyote in double figures (the Caps have four such players).  Keller has 26 points, and that would be tied for fourth on the Caps with John Carlson, but no other Coyote has more than 20 points (the Caps have five).  Braden Holtby (should he get the call in the first of a back-to-back) has allowed 20 goals in eight games in the month of December.  Arizona has allowed 21 goals in its last six games, all losses in regulation.  And if the Caps need a bit more incentive, there is that 6-3 whacking the Coyotes applied last March 31st in Glendale, jumping out to a 3-0 lead barely 13 minutes into the game and coasting in from there.  Except for that wild 8-7 overtime loss to the Penguins in January last season, it was the most goals the Caps allowed in a game over the 2016-2017 season.

The Coyotes are having a hard time of it this season, but no NHL team is a pushover.  The moment you show one disrespect, or look ahead to the next opponent or holiday shopping, it will come back to haunt you.  But the Caps are healthy again. They’re hot.  You would think they would want to finish the pre-Christmas portion of the season on a jolly note.  This will help.