The Peerless Prognosticator is ON THE AIR!!! -- Game 47: Senators at Capitals, April 25th

“hoooo-EY!  That was quite a game the other night, cuz, wasn’t it?”

“Yes, Cheerless, it was.  Amazing that the boys came back from as far back as they did to win the division.”

“And y’know, Fearless, it was nice of Peerless to give us a chance to ‘take the ice’ kinda, and do this blog for him.”

“Well, just like the players, he’s getting a night off with the division clinched so he can be ready and rested for the playoffs.”

“He did say that we need to be faithful to the ‘system’ though…whatever that means.”

“I think it means he wants us to stick to the formula and not free lance too much.”

“I just think he doesn’t trust us…”

“Would you trust you if you were giving you free rein at writing up a game preview?”

“Never mind… Let’s see, I think the first thing is some sort of introduction.  I think he left something to get us started.”

“OK… -ahem- … Let’s see… T’nite the Washington Capitals play their penultimate game… Cuz, what’s a ‘penultimate?’  I thought that was a really fine writin’ pen or something.”

“No, Cheerless, it merely means ‘next to last.’”

Tonight the Washington Capitals play their penultimate game of the 2013 regular season, hosting the Ottawa Senators at Verizon Center.  The Capitals, champions of the Southeast Division…

“Is that something you want to brag about, cuz?  I mean, it’s not as if the Southeast Division was like the Southeastern Conference in college football…”

Tonight the Washington Capitals play their penultimate game of the 2013 season, hosting the Ottawa Senators at Verizon Center.  The Capitals, champions of the Southeast Division, will look to add to their 10-1-0 record in April, while the Senators try to clinch a spot in the post-season.

Ottawa comes into this game in seventh place, tied with the New York Rangers and just one point ahead of the ninth-place Winnipeg Jets.  Since Winnipeg’s game against Montreal this evening does not start until 8:00 p.m. Eastern time, it is up to the Senators to take things into their own hands by winning this game to clinch a playoff spot, or wait on the Winnipeg-Montreal outcome to see if they have to win either of their last two games – against Philadelphia on Saturday or in Boston on Sunday (a make-up game postponed from Patriots Day in Boston) – to make the post-season.

Ottawa comes into this game humming the old tune, “The Streak.”

“Just don’t get it in your head to act it out, Cheerless.”

“Are we going to Six-Flags to ride the ‘Superman: Ride of Steel?’”

“No, we’re not going to Six Flags, and will you let me get on with this?”

In the three-game winning streak from March 23rd through March 28th that started this roller coaster ride the Senators scored ten goals (3.33 per game).  In the five-game losing streak from March 30th through April 9th, it was seven goals in five games (1.40 per game).  From April 11th through April 18th, when the Senators won four in a row, it was 11 goals (2.75 per game).  And now, they have just two goals scored over their last two games, both losses.

On the other side, over that entire set of 14 games the Senators allowed more than three goals only three times and averaged only 2.29 goals against.  It still left Ottawa with only a 7-7-0 record overall in those last 14 games and clinging by a hair to a playoff spot.

The last win for the Senators was their 3-1 win over the Caps on April 18th.  Much of what Peerless said in the preview for that game still applies, but with two big exceptions.  The first concerns their goalie, Craig Anderson.  Over his first 20 appearances Anderson allowed as many as four goals once and allowed three goals in consecutive games only once.  He was the epitome…

Over his first 20 appearances Anderson allowed as many as four goals once and allowed three goals in consecutive games only once.  He was the epitome of consistency and excellence.  But in his last two appearances (against Pittsburgh and Toronto), he allowed four goals on 22 shots and three goals on 24. That’s an .848 save percentage.

And as Peerless pointed out in the last Ottawa pre-game, Anderson seems to struggle with low shot volumes in games.  Here is a fun fact… in the six full games this season in which he has appeared and faced fewer than 25 shots, he 2-4-0, 2.70, .876.

“Is this where you put in the numbers, Fearless?” 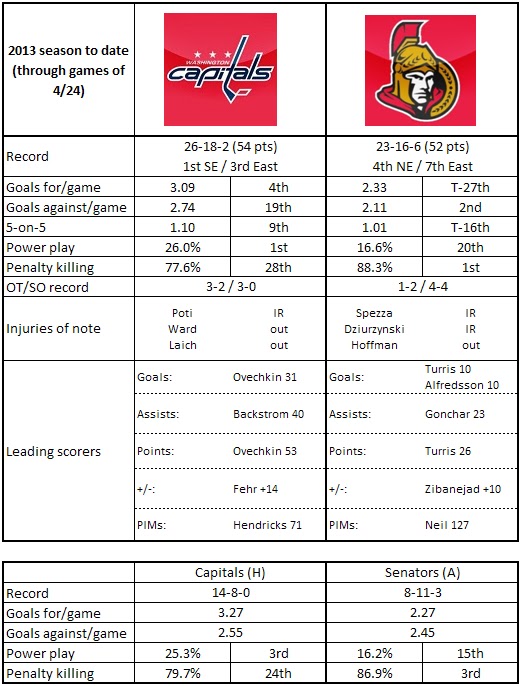 1.  Kyle Turris and Daniel Alfredsson lead the Senators in goal scoring among players having played the entire season in Ottawa.  They rank tied for 102nd in the league in goal scoring (tied for 124th in even-strength goals).  If they played for Pittsburgh, they would be tied for eighth on the club in goal-scoring.

2.   The odd part about Ottawa’s offense is that almost a quarter of its goal scoring comes from the defense (25 of 104 goals).  Seven different Senator defensemen have goals.  By way of comparison, the Caps also have seven different defensemen with goals scored, but their 23 goals scored is just 16.2 percent of the total goals scored by the club.  The Senators are not getting much out of their forwards, comparatively speaking.

3.  As you might expect, Ottawa does a better job defending opponents at home than on the road.  Not that they are anything but stingy whether at home or on the road, but there is this.  Only twice in 23 home games have they allowed more than three goals.  On the road the Senators have done so five times in 22 games.

4.   Maybe it is a scoring thing, but Ottawa does not appear to do that whole shot-blocking thing on the road.  Only Detroit and Los Angeles have fewer blocked shots in road games than the Senators.

5.  One thing you can count on in games involving the Senators – futility.  Ottawa ranks first in the league in lowest percentage of shots allowed for goals (6.7 percent shooting percentage for opponents).  It is a good thing, too, because the Senators also rank dead last in their own shooting percentage (7.1 percent).  All told, you stand a 6.9 percent chance of seeing a shot go in by either team during a Senators game, by far the lowest in the league (San Jose: 7.9 percent).

1.  The Caps have 14 different players with game-winning goals this season (a total of 24 GWG), including the new guy, Martin Erat.

Fearless’ and Cheerless’ Players to Ponder

In what might be a recuperation suitable for publication in the Canadian Medical Association Journal, Erik Karlsson could be making his return to action in this game after sustaining a 70 percent cut in his Achilles tendon, courtesy of Pittsburgh’s Matt Cooke on February 13th.  When he was put out of action by Cooke, Karlsson was not putting up points at quite the pace he did last season, when he won the Norris Trophy (19-59-78 in 81 games), but his 6-4-10 scoring line in 14 games was impressive nonetheless.  On a team that has been starved for offense, he could be the shot in the arm the Senators need.  Or, he could disrupt a delicate chemistry that the Senators have developed in having to do without Karlsson and Jason Spezza due to injuries.

“Will you be serious?”

OK…it’s that whole second line thing.  They almost have that chemistry thing going.  Mike Ribeiro is 2-10-12 in his last nine games.  Troy Brouwer has six goals in his last six games.  Erat got a bit of a slow start there when he came over from Nashville, but he had a couple of nice games against Toronto and even in the Ottawa game the Caps lost.  He hasn’t had a point in his last two games, but you kinda think that he’s up on the porch and about to knock on the door.  If he gets going, and that second line clicks?  Gonna be a tough team to beat.

Fearless… “Play your game…Play your game.”  They have their playoff seed.  They can’t do any better or any worse than being the third-seed.  At this point, that leaves playing the right way and not letting any bad habits start keeping in on the "to-do" list for the next two games.  That has been more than enough for the past 35 games.  The thing now is to keep it going.

Cheerless… The key to any hockey game is simple.  Score more goals than the other guy.  You folks make this too durn hard.

There really isn’t any mystery about this.  One could call this a “statement” game, since Ottawa could still end up playing the Caps in the first round.  But at this point, one suspects that is more of a “fan” thing than a player thing.  Each team knows the other one is talented and devoted to executing a system of play.  It is not as much a matter of “statement,” then, as “execution.”

Oh, and speaking of execution…