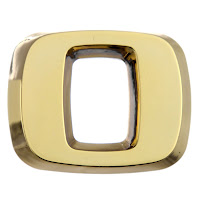 “Chaos in the Capitals’ zone…”

That quote from television analyst Craig Laughlin pretty much sums up the Washington Capitals’ play last night as they dropped their eighth game in ten tries this season, a 3-2 loss to the Toronto Maple Leafs.

And that’s too bad, in a way, because it was not as if the Maple Leafs were lights out dominating.  The Leafs managed to get only half of their 42 shot attempts on goal.  They did, however score three goals on their first 12 shots of the game due in part to the chaos of which Laughlin spoke and some less than inspiring goaltending from Michal Neuvirth.

The chaos part came on the Leafs’ first goal when Michal Neuvirth left the puck behind his own net for defenseman Tom Poti.  What Neuvirth did not communicate, or what Poti did not realize on his own, was that James van Riemsdyk was barreling down the ice in pursuit of the puck.  With the puck sitting between Neuvirth and Poti, van Riemsdyk pilfered it, sped around the back of the Caps’ net, and tucked the puck past the post before Neuvirth realized what happened, putting the Leafs up 1-0 ten minutes into the game.

More chaos ensued a couple of minutes later when the Caps got caught in some good old fashioned running around in their own zone.  We could tell a story here of the goal, but pictures being worth a thousand words, we won’t waste a hundred here.  We will just refer to you a post by Justin Bourne as part of his “Systems Analyst” series.

In what is perhaps the most concise and cogent analysis of a play you will read this year, he said of this picture… 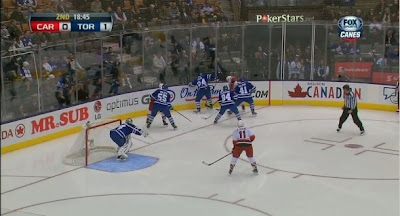 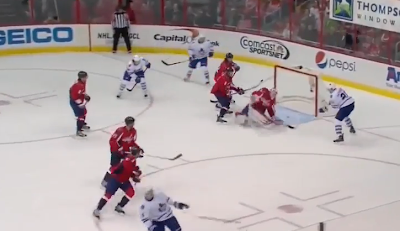 Over on the right is James van Riemsdyk…the goal scorer.  All we can add to the Bournian analysis is the word, “either.”  As in, “maybe don’t defend like this…either.”

Toronto got their two-goal lead back mid-way through the second period when the impressively named Korbinan Holzer converted a cross-ice feed from Jean-Luc Picard… uh, Mark Fraser… and blasted a skipping, dipping, zipping slap shot past Michal Neuvirth.

Mike Ribeiro – the only Cap it seems to be showing up night in and night out so far – made things respectable with another Caps power play goal less than seven minutes into the third period.  But the Caps managed only seven more shots on goal, all turned away by Leafs goalie Ben Scrivens, who earned his second win of the season in Toronto’s 3-2 win over the Caps.

-- The Caps managed only 12 shots at even strength over the first 47 minutes of the game.  They scored no goals.

-- When Marcus Johansson is your best faceoff man for the night (2-for-2), that’s a problem.  No other Cap finished with a winning mark in the circle.  They were 9-for-23 in the offensive end, 5-for-13 in the defensive end.  If you don’t do the little things well, you don’t get a chance to do the big things at all.

-- John Carlson was on ice for another goal against, but on the other hand… four shots on goal (on eight attempts), three hits, two blocked shots.  As much as in any game this year he looked like a two-way defenseman.

-- Alex Ovechkin has ramped up his shots-on-goal rate, but his 0-for-4 last night puts him at 2-for-38 through ten games (5.3 percent).  That would rank him 55th in the league… if he was a defenseman.  As it is, he ranks 194th among forwards and 248th among all skaters.  Oh, did we say he’s tied with Nicklas Backstrom?

-- Toronto had almost as many hits as shots on goal for the game, and 18 hits is not a heavy volume.

-- Eric Fehr had a night that few will remember.  Seven minutes of ice time, a penalty, and an otherwise completely unmarked score sheet.

--  Toronto did not have a lot of shots on goal (21), but they did manage to spread things around.  There were 13 different skaters recording at least one shot on goal.  The Caps did the same with their 26 shots on goal, with 13 skaters getting at least one.

-- Phil Kessel can’t buy a break as far as goal scoring goes, but he did have two assists and was plus-3 for the night to lead the team.  When life gives you lemons, make lemonade, boys.

-- When they went to the locker room down 2-1 last night, it was the fifth time in ten games the Caps have trailed at the first intermission.  They are 0-4-1 in those games.  They have led only once after 20 minutes, and they lost that game, too.

In the end, let’s face it.  It is now approaching a betting certainty that the playoff streak will end at five years.  The Caps are last in the Eastern Conference, four points out of a playoff spot and with seven teams to climb over to get to eighth place.  They have to travel to Pittsburgh for another rematch of games played in the last week, then they get what should be a reprieve with a home-and-home set against Florida.  Except, Florida is 2-0-1 in their last three games.  The Caps have five games between now and Presidents Day, four of them on the road.  You can do your own math to figure out if the Caps will have any meaningful games to play after that holiday.