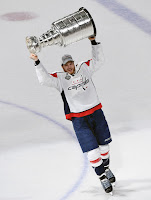 “There comes a time when all the cosmic tumblers have clicked into place, and the universe opens itself up for a few seconds, to show you what is possible.”
--Terrence Mann in the film, “Field of Dreams”

John Carlson came into the 2017-2018 season an eight-year veteran of the NHL, all of them as a defenseman with the Washington Capitals.  He built a reputation as a durable defenseman (he played his first five seasons appearing in every game).  He became a reliable offensive contributor, his numbers increasing from seven goals and 37 point in his first full season to 12 goals and 55 points in his fifth full season.  He became a minutes eater, his average ice time going form 22:39 in his first full year in Washington to 24:31 in his fourth full season.

But in the two seasons preceding this one, injuries cut his participation by 26 games in 2015-2016 and another ten games last season.  His goals dropped back into single digits – eight two years ago and nine last year.  His point totals dropped back into the high thirties.  And there emerged a question.  Was John Carlson, whose six-year/$23.8 million contract was to expire at the end of the 2017-2018 season, a player in whom the Capitals would want to invest as a “core” commodity of the likes of other home-grown products such as Alex Ovechkin, Nicklas Backstrom, or Evgeny Kuznetsov?

A “walk year” for a player is that last year of his contract when he can either put up numbers and/or win when it counts to add value to a wider variety of suitors.  Or, he can crumble under the pressure and regress to the point where he might be in demand, but he leaves millions of dollars and years of term in his next contract on the table.

Carlson was also a top-ten performer among league defensemen in the following:

He also had his moments among the ten-game segments.  He had two or more goals in six of the eight segments, nine or more points in five of them.  Although his plus-minus was sluggish – a minus-6 over his first seven segments – he closed strong with a plus-6 in his last segment to finish even for the season. 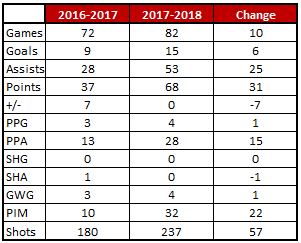 Cheerless’ Take… Hey cuz, here is another top ten number for ya… 97. That’s how many giveaways Carlson was charged with, sixth-most in the league.  And that takeaway-to-giveaway ratio… 0.60:1… woof.

If you can’t go home again, it’s nice to beat up on the hometown team when they come to your house.  John Carlson, who spent much of his earliest development in hockey in New Jersey, had just such a night in late December.  He was on a nice stretch of his own, going 1-9-10, plus-6, in the 13 games preceding this one, over which the Caps were 9-2-2.  The Caps wasted no time getting the jump on the Devils.  Carlson sent the puck from the right point to Christian Djoos at the opposite point.  Djoos shimmie3d his way in deep and around the back of the New Jersey net.  Coming out the other side to the left of goalie Cory Schneider, he threw the puck in front, where Tom Wilson fished it out and slammed it past Schneider at the 2:26 mark to open the scoring.

The teams exchanged goals over the remainder of the period, the Caps taking a 2-1 lead to the first intermission.  When they returned, the Caps extended their lead, thanks to Carlson.  On a power play, the Caps worked the puck clockwise from the left side to Nicklas Backstrom below the goal line.  Stepping to his left he found a passing lane to Carlson who was closing on the right wing faceoff circle.  He one-timed the pass from Backstrom past Schneider’s blocker, and it was 3-1, 7:01 into the period.  In the third period, Matt Niskanen and Travis Zajac exchanged goals in the first nine minutes, the Caps taking a 4-2 lead late into regulation.  With less than a minute to go, Backstrom won a faceoff in his own end back to Carlson.  Taking the puck behind his own net and circling out the other side, he found Backstrom exiting the defensive zone.  Backstrom passed the red line and snapped a shot into the empty Devils’ net, giving the Caps a 5-2 win to close the 2017 portion of their schedule.  The goal and two assists for Carlson gave him his first of two three-point games for the season, the seventh of his career with three or more points (he would get his second of the season and eighth of his career  against Toronto on March 3rd).

Going on the road for a weeknight game in upstate New York is not likely to be among the most desirable activities for an NHL player.  Compounding the Caps’ problems in going to Buffalo in early November was that they played an overtime game against the Arizona Coyotes the previous night.  John Carlson might have had a bit more spark than his teammates, for he had two points against Arizona the previous night, one of them the game-winning goal in the last minute of overtime to take down the Coyotes.

Might have, but he did not, any more than his teammates had.  After a listless first period that went scoreless for both teams, Buffalo scored in the third minute of the second period on a goal by Evander Kane.  Alex Ovechkin tied it late in the period, but the Sabres regained the lead early in the third period on a Benoit Pouliot goal.  The 2-1 margin would hold up until the last 20 seconds.  Carlson made a fine play to deny Jack Eichel a shot at the empty Washington net at the Caps’ blue line, but he could not keep the puck from sliding along the blue line to Kane, who sent it along to the empty net to close the scoring.  Carlson was on the ice for all three Sabres goals.  He skated a team-high 25:34, had a frustrating five unproductive shots on goal (tied for the team lead), and was sent off for a delay of game penalty when he sent the puck over the glass in the third period.

It was a the start of an almost non-stop run of offensive production for Carlson in the Caps’ march to the Stanley Cup.  In 24 games he had consecutive games without a point only twice, neither instance longer than two games.  Washington was 11-4 in the 15 games in which he recorded at least one point.  When all was said and done, Carlson tied for the postseason lead in goals among defensemen (five, with Winnipeg’s Dustin Byfuglien), led the league in assists (15), led the league in points (20), was second in plus-minus (plus-11, trailing only teammate Brooks Orpik’s plus-17), had a whopping 80-55 edge in shots on goal over Byfuglien to lead all defensemen, and was tenth in average ice time (25:38).

Chances are, John Carlson will not match these regular season and postseason numbers in any of the years of his new contract.  It neither makes him a lesser player, nor does it diminish the accomplishment of this season.  Sometimes, those cosmic tumblers do click into place, and the universe does open itself up for a few seconds, or at least over the nine months of a hockey season, to show you what is possible.