The Peerless Prognosticator is ON THE AIR!!! -- Game 82: Islanders at Capitals, April 6th

And so, 185 days after it started with a Stanley Cup banner raising, it ends with a chance to defend that championship.  For the Washington Capitals, the regular season of their defense of a Stanley Cup championship ends on Saturday night when they host the New York Islanders at Capital One Arena.  Washington will enter the game on a high note, having clinched their fourth straight Metropolitan Division title on Thursday night against the Montreal Canadiens.  Meanwhile, the Islanders have clinched a first round matchup against, well, somebody.  It is not yet clear, even as the season heads into its final night just who – or where – the Islanders will play to open the postseason next week.  In that regard, the motivation would seem to favor the Islanders, who are still playing for home ice advantage in the first round and with at least one point in this contest would have it.

The Islanders have done it with being stingy in allowing goals, the best scoring defense in the league, and the starts in net.  New York is one of those teams that, if they do have a goaltending pecking order, it is not written in stone.  Robin Lehner and Thomas Griess have split the starts almost down the middle, Lehner getting 42 and Greiss getting 39 as the teams head into the final night of the regular season.  Lehner has had a fine season, a career year in some respects.  His wins (24), goals against average (2.18) and save percentage (.928) are career bests (minimum: 20 games), as is his total of five shutouts, which matched his total over his previous two seasons, spent with the Buffalo Sabres.  He has had intermittent injury or other issues this seasons, missing six games on three separate occasions -- back spasms last November, another pair of games to an undisclosed reason in December, and an upper body injury last month.  In his return from that latest injury, Lehner struggled in allowing five goals on 39 shots in a 5-0 loss to the Boston Bruins.  But since then, Lehner is 4-1-0, 1.63, .948, with one shutout in six appearances (one no-decision).  Lehner is 1-3-1, 2.60, .913 in five career appearances against the Caps.

Since the trading deadline in late February, the Islanders have struggled (11-9-0) and have struggled to score (2.25 goals per game).  Someone is going to have to step up in the postseason and bear a heavier scoring burden.  Mathew Barzal immediately comes to mind.  Barzal has 11 points in those 20 games since the trading deadline, second on the team, but he has only one goal in that span.  The slowdown cost Barzal whatever chance he had to match or surpass last year’s Calder Trophy-winning rookie season (22-63-85, plus-1), although his scoring line of 18-44-62 remains impressive for a second-year player.  Still, the goal scoring does matter.  New York is 10-3-1 in the 14 games this season in which Barzal scored a goal.  And it is that goal scoring, not mere offensive engagement that matters.  Barzal has had 28 games this season in which he recorded three of more shots on goal, but the Islanders are just 13-11-4 in those games.  He might be a sophomore, but the club does depend on him for offense.  Barzal is 1-4-5, minus-4, in eight career games against Washington. 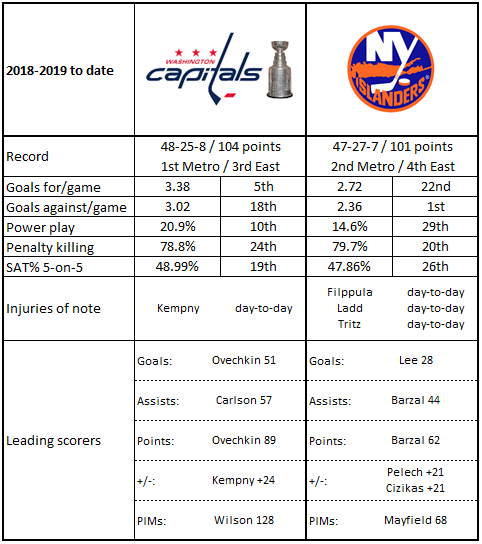 1.  Since the trading deadline in late February, no team in the league has fewer power play goals than the Islanders (three in 20 games).  Their 6.3 percent power play is worst in the league since then.

2.  New York’s penalty kill is not much better over the same span of 20 games.  Their 77.3 percent penalty kill is better than only six teams since the trading deadline.

3.  Unsurprisingly, the Islanders have been an inefficient offensive team overall.  Their 7.4 shooting percentage over their last 20 games is fifth-worst in the league.

5.  Physical, gritty, or spending too much time chasing the puck?  The Islanders have 564 credited hits over their last 20 games, most in the league, and their 325 blocked shots are second (Colorado: 347).  And, they have been charged with 317 giveaways, second-most in the league.

2.  In what might be an especially good sign, the Caps have done it with defense, the 43 goals allowed being fifth-fewest in that span of games and second-fewest in the Eastern Conference (Pittsburgh: 41 goals allowed).

3.  Washington, who struggled with possession numbers over much of the first two-thirds of the season, are eighth in the league in shot attempts-for percentage at 5-on-5 since the trading deadline (53.11 percent).

4.  Only three teams in the league have scored more even-strength goals since the trading deadline than the Caps (54): Tampa Bay (57), Calgary (56), and Florida (55), all in more games than Washington.

5.  The Capitals have not scored an overtime goal since the trading deadline, one of nine teams not to do so.

Since the trading deadline, Brock Nelson is tied for second on the club in goals (six, with Jordan Eberle) and leads the team in points (12).  The odd part of his scoring is that he has only two power play points (both assists), despite leading the team in power play ice time per game in that span (2:29).  It is a reflection of the general weakness of the Islander power play over the last six weeks.  However, he does remain in a position to match or establish a new career high in goals scored, the 25 he has this season one behind his total (26) in 2015-2016.  His 28 assists and 53 points overall are already career bests, while his overall scoring line is a pleasant improvement over a relatively disappointing effort last season (19-16-35).  The Islanders have done well with Nelson getting larger chunks of ice time.  In the 13 games in which he skated at least 20 minutes this season, the club is 8-3-2, while they are just 9-10-0 in the 19 games in which he skated less than 16:45.  Nelson is 6-5-11, minus-5, in 23 career games against the Capitals.

With the Metropolitan Division title in their grasp, this could be a chance for players who have had little chance to display their talents over the last six weeks do so in the season finale in front of the home fans.  For example:

Dmitrij Jaskin has not appeared in a game since February 17th and has only one point (a goal) in 12 games since early February.  He has only one goal in 18 games on home ice this season for the Caps.  It would be nice to see him rewarded for his patience.

Jonas Siegenthaler last appeared in a game for the Caps on February 5th, against Vancouver.  He was assigned to the Hershey Bears in the AHL four days later, where he went 2-2-4, plus-7, in 20 games since his reassignment. Injury to Michal Kempny led to his recall, and he could get another chance to get his first NHL goal in the finale (he has four assists in 25 games with the Caps this season).

Chandler Stephenson has been on the edge of playing and not playing over much of the season.  Since January 15th he has appeared in 20 of 36 games, going 0-2-2, minus-6.  In some respects it has been a disappointing year for Stephenson, who dressed for all 24 games of the Caps’ Stanley Cup playoff run last spring.  It would be nice to see him shake some of that off and perhaps even get some power play ice time to give him a chance to light the lamp.

Pheonix Copley had, in some respects, the most difficult job to assume for the Caps going into the season.  Last year, Philipp Grubauer was arguably the best backup goalie in the league, and he was named the team’s starter for Game 1 of the postseason, an unexpected development, given he played behind a former Vezina Trophy winner in Braden Holtby.  Copley, starting his second tour in the organization (he did not play with the Caps in his first), came into the season having played in two NHL games, started one, and was looking for his first win in the league.  And, he was doing this for the defending Stanley Cup champions.  He acquitted himself well, going 16-6-3 in 26 games with a 2.94 goals against average and a .904 save percentage with his first NHL shutout.  Getting a curtain call in Game 82 would be a cherry on the sundae for his regular season, even if it is, if form holds and hope is realized, his last appearance of the season.

Konstantin Stanislavski, the legendary theater actor and acting theorist, once famously remarked, "there are no small parts, only small actors."  It is as true in team sports as it is in acting.  Not everyone has the talent of a Nicklas Backstrom or the theatrical flair that brings fans out of their seats like Alex Ovechkin.  Some players toil in obscurity, the mortar that helps make the bricks a solid structure, and those efforts deserve respect and reward when circumstances permit.  Saturday night might be a chance for the role players’ turn in the spotlight.