The Peerless Prognosticator is ON THE AIR!!! -- Game 17: Capitals at Panthers, November 7th

It is a late start to the work week for the Washington Capitals as they head to Florida to meet the Panthers on Thursday night.  Both teams are coming off long breaks, the Caps not having played since beating the Calgary Flames at home last Sunday, and the Panthers have been on a break since shutting out the Detroit Red Wings last Saturday.

When Jonathan Huberdeau took the ice 1:58 into the contest with the New York Islanders on Long Island on October 12th, he took over ninth place in games played for the Florida Panthers, suiting up for the 472nd time and passing Jay Bouwmeester on the franchise list.  He will shortly become only the eighth player in team history to dress for 500 or more games, and only three players in team history have played more seasons for the Panthers: Paul Laus (nine), Radek Dvorak (nine), and Stephen Weiss (11).  Not that Huberdeau is a graybeard.  He turned just 26 years old last June.  He was the third overall pick in the 2011 Entry Draft, one of the deepest drafts in recent memory, one with 14 players having topped 100 career goals (including Huberdeau, ninth with 134 goals) and 17 players with at least 200 points (humberdeau is sixth with 377). His fellow draft classmates inclue Nikita Kucherov, Gabriel Landeskog, John Gaudreau, Mark Scheifele, Sean Couturier, and William Karlsson.

Huberdeau is off to a fine start this season after posting career highs in goals (30) and points (92) last season.  Through 14 games he is 9-9-18 and is shooting an unusually good 24.3 percent (his career average is 12.0 percent).  The odd thing about his team-leading nine goals is that none of them have come on power plays.  Two of his goals are game-winners, though (one in overtime, the team’s only overtime goal), which is a third of the game-winning goal output for the club so far.  He has been quite consistent in the early schedule.  In 14 games played he was held without a point only three times, all on the road and none of them consecutively.  In five home games he is 5-5-10, even.  Huberdeau is 6-11-17, even, in 20 career games against the Capitals.

This season has been another of frustration for Trocheck, who has not played since October 19th against Nashville.  He has missed the last six games with a lower-body injury, but even before that he had not recorded a goal in seven games after potting one in the Panthers’ 5-2 loss to Tampa Bay in their season opener.  In his absence, Florida has gone 4-1-1 and scored 25 goals in the process.  Trocheck’s offense has not yet been missed.  But he has been effective against the Caps, going 7-8-15, plus-1, in 13 career meetings.

Aaron Ekblad was the top overall pick.  Keith Yandle is the guy you can’t get out of the lineup.  Anton Stralman was the free agent signed away from the other team in Florida.  So who leads the defense in goals and is tied for the points lead?  MacKenzie Weegar (3-6-9).  His is quite a story.  Only five players were taken later in the 2013 Entry Draft than 206th overall pick Weegar.  But only one player among the 90 players taken in the fifth round or later have appeared in more than the 141 games played to date by Weegar (Will Butcher, the 123rd overall pick by Colorado, has appeared in 169 games for the New Jersey Devils to date). 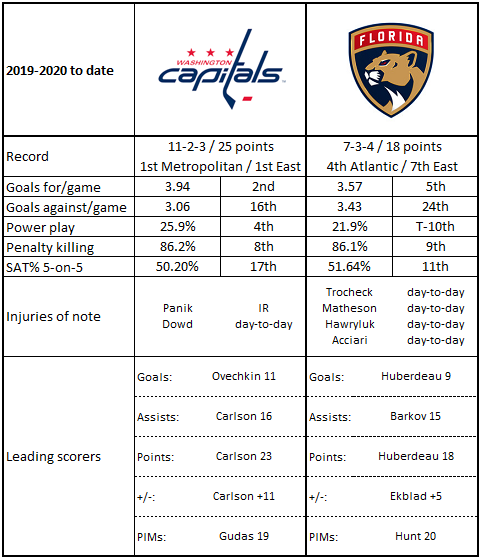 2.  The Panthers make goalies work for their supper.  They are second in the league in shots on goal per game (34.8).  But they also have been adept at limiting opponents, both in shots and opportunities.  Their average shots on goal allowed (29.4) is sixth-fewest in the league, and their 501 shot attempts allowed at 5-on-5 are fifth-fewest (501 in 14 games), and only two of the teams having allowed fewer did it in fewer games (Tampa Bay: 480 in 13 games; New Jersey: 445 in 13 games).

1.  The Caps have recorded at least one power play goal in seven of nine road games this season.  When one factors in shorthanded goals scored, the Caps have failed to record a special teams goal in a road game only once – October 22nd in a 5-3 win in Calgary over the Flames.

3.  Going into Wednesday night’s schedule, the Caps faced 37 shorthanded situations on the road this season, tied for second (Calgary: 42) and most in the Eastern Conference.  All 39 of the penalties they have taken on the road have been minor penalties.

5.  When the Caps held Toronto to 31 shot attempts at 5-on-5 in their last road game, a 4-3 overtime win on October 29th, it was the fewest they allowed in a game since they allowed the Islanders 31 attempts on October 4th, and their plus-3 shot attempt differential against the Maple Leafs broke a six-game streak on the road of minus differentials.

You will notice above that there are no active Florida goaltenders having posted any wins, recorded any goals against average, logged a save percentage, or pitched a shutout.  That is because Sam Montembeault has only 15 games played in the league, none against the Caps, and the Panthers’ new number one goalie is Sergei Bobrovsky, signed to a seven-year/$70 million contract last July after spending his last seven years with the Columbus Blue Jackets.  Bobrovsky holds the top ranking in every meaningful statistical category in Blue Jackets history – games (374), wins (213, the only one of 24 goalies to record more than 100 wins), goals against average (2.41; minimum: 10 games), save percentage (.921), and shutouts (33).

Bobrovsky got off to a rocky start with his new team, going 3-2-3, 3.87, .869 in eight games.  Over his last four appearances, though, he is 3-0-0 (one no-decision), 2.17, .917, with one shutout, that coming in his last appearance (through Tuesday), a 22-save effort in a 4-0 win over the Detroit Red Wings.  Where he has struggled is at even strength.  Of 54 goalies to have appeared in five or more games through Tuesday, Bobrovsky ranked 50th in save percentage at evens (.875), and no goalie had allowed more goals at even strength (32 in 12 games).  Bobrovsky is no stranger to the Caps.  Although this will be his first meeting against Washington as a Panther, assuming he gets the starting nod, he is 9-11-4, 2.89, .904, with one shutout in 25 career games against the Capitals.

Some players make teams successful by sheer force of their superior numbers.  Others do it in more mysterious ways.  Consider Michal Kempny.  Since arriving in Washington in February 2018, the Caps have a regular season record of 64-29-8 in games in which he played.  The Caps are 7-0-1 in eight games since Kempny’s return from surgery to repair an injured hamstring late last season after starting the year 4-2-2.  And, of course, the Caps went 16-8 with Kempny in the lineup in the Stanley Cup run of 2019 while missing the first round exit from the playoffs last spring.  His presence, while unimpressive on a top-end numbers basis since his arrival, seems to have the persistent effect of calming and improving the reliability of defensive pairs.

However, those offensive numbers have been rather impressive in his delayed start this season.  Despite that late start, he is second among Caps defensemn in goals (three), assists (six), points (nine), and is tied for second in plus-minus (plus-10, with Radko Gudas).  Given the point in the season at which we find ourselves and the nature of shooting by defensemen, a feature of Kempny’s performance to date will not last, but it is interesting nevertheless.  He has three goals on ten shots to date, the only defenseman in Caps history to hold a shooting percentage of 30 or more percent and only the third with a season shooting percentage over 20 percent (Lee Norwood was 7-for-33/21.2 percent in 1981-1982, and Jean Lemieux was 4-for-19/21.1 percent in 1976-1977).  Kempny is 0-1-1, minus-2, in three career games against Florida.

The Panthers are one of those irritating teams that seem to give the Caps problems.  Four straight losses in Florida and six losses in seven games on Panther ice (1-4-2) will do that.  The Panthers have been nothing if not consistent so far on home ice, scoring four goals in four of their five games to date and one with three goals.  On the other hand, the Caps have been almost as consistent on the road and more prolific to boot, recording four or more goals in six of their last seven road contests and five or more four times.  Account for the recent good play by Braden Holtby and Sergei Bobrovsky in goal, and perhaps nine total goals aren’t in the cards, but seven is in play.